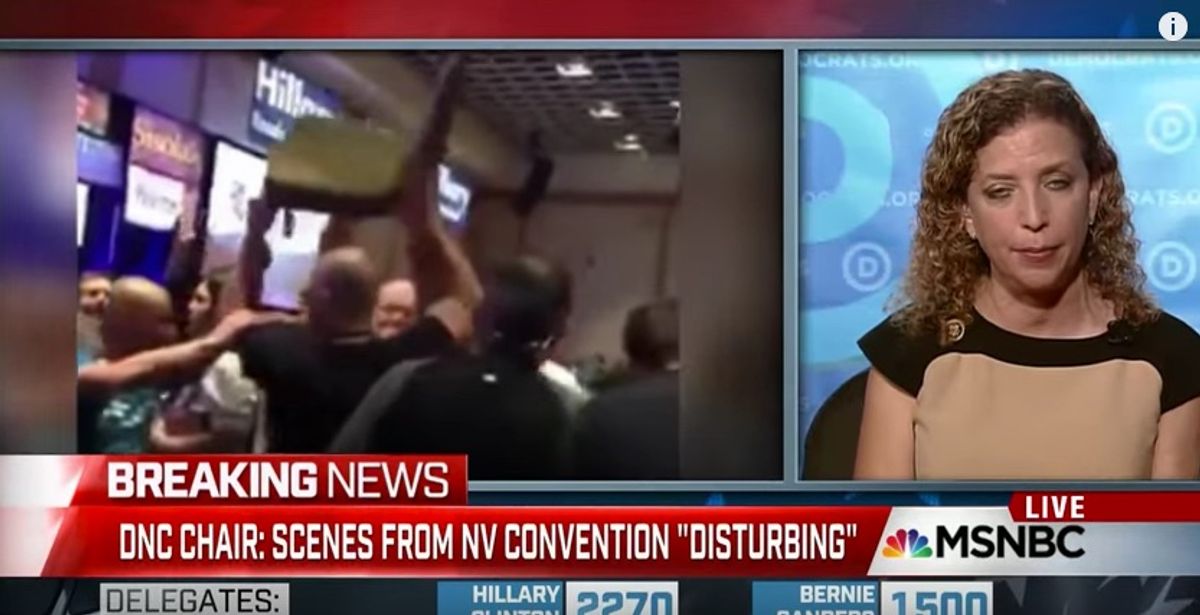 On 14 May 2016, Democrats held a third-tier convention in Nevada, the events of which were, by all accounts, adversarial.  Supporters of Bernie Sanders claimed that rules were adjusted and schedules changed without notice, while supporters of Hillary Clinton claimed Sanders supporters were violent and obstreperous and resorted to throwing chairs.

Much of the initial reporting came from local journalist Jon Ralston, who live-tweeted events as they occurred at the convention on 14 May 2016. While Ralston didn't report at the time that chairs were being thrown at the convention, he later tweeted that:

Hey, Berniebot chair-throwing truthers: It happened. People saw it, inc. one journo who was there and reported it. https://t.co/J4XMWy3mGs

The chair-throwing claim was repeated across election coverage. In an interview with MSNBC's Chris Matthews and Rachel Maddow, Democratic National Committee chair Debbie Wasserman Schultz repeated, in concert with video footage of a man holding a chair aloft, the refrain that Sanders supporters had been throwing chairs at the convention:


The video shown during that segment was credited to the YouTube account of a "Bud Meyers," but we viewed Meyers' uploaded footage from the 14 May 2016 convention and were unable to locate the clip that included the image credited to him by MSNBC. The only relevant video we could locate on his YouTube account was a clip mocking (rather than confirming) the chair-throwing rumor:

The only intact footage that matched MSNBC's claim and imagery shows a man of unknown affiliation briefly lifting a chair before it was placed back on the ground:

The chair-throwing story was reported as fact not just by MSNBC but by news outlets such as the New York Times, the Associated Press, and CBS. MSNBC's account opened as follows:

No, this is not the work of Donald J. Trump supporters, some of whom have harassed critics of the presumptive Republican presidential nominee. It was angry supporters of Senator Bernie Sanders who were directing their ire at the Nevada Democratic Party — and its chairwoman, Roberta Lange — over a state convention that they think was emblematic of a rigged political system.

The Times's article also led with the claim of chairs thrown by violent attendees and included reports of chaos among the ranks of Sanders supporters:

Raising the prospect of lasting fissures in the party, Senator Bernie Sanders rebuffed pressure to rein in his supporters after they disrupted a weekend Democratic convention in Nevada, throwing chairs and later threatening the state chairwoman in a fight over delegates. The uproar comes as Hillary Clinton is struggling to turn her and the party’s attention to the fall.

Mr. Sanders’s supporters showed no sign of backing down. In interviews, several threatened to disrupt the party’s convention in Philadelphia in July with protests and nonviolent disobedience over a nominating system that they say has treated Mr. Sanders unfairly. In emails, on social media and on websites, his supporters have traded advice about protest tactics and legal services in case of mass arrests.

Jon Ralston tweeted about the purported chair throwing activity despite having left the convention early, but he didn't initially clarify that he was not an eyewitness to the alleged incident:

Subsequent tweets between Ralston and another reporter suggested that Ralston's assertion about chair throwing was, at best, second-hand, as Ralston inquired whether the other reporter had obtained video of the event:

As far as we know, no video documenting such claims has yet surfaced, but coverage of the chair-throwing fracas continues unabated.

At least one outlet held their own reporting to account when Ralston's came under question. NPR ran with Ralston's second-hand assertion about thrown chairs, but their ombudsman later pegged Ralston (who did not witness the chair-throwing) as the sole source behind the widely-repeated claim and admitted that no evidence had been produced that anyone had thrown chairs:

[O]ther outlets, including The Associated Press, also reported that chairs were thrown ... in the extensive video posted on social media in the aftermath of the convention I've so far found none of a chair being thrown. One video shows a chair being lifted in the air.

I asked Beth Donovan, NPR's senior Washington editor, to respond to the concerns. She wrote, "Several members of our staff watched live video that showed a man brandishing a chair. Nevada analyst Jon Ralston, who was in the room and over time has been a very reliable source, reported that a chair was thrown. We okayed using and sourcing his reporting." But, she added, "When Ralston's reporting came under question, we adjusted our language," by not repeating the word "thrown." Instead, Keith's report this morning referred to "physical skirmishes." (It also quoted Nevada Sen. Harry Reid as referring to "violence," which he did, indeed, do.)

Donovan went on, "So, was there violence? There was pushing, shoving, and screaming, a chair was brandished and a great deal of hostile and obscene language used. Several editors and reporters saw and heard the video live and later. People on the ground described it as violence. It doesn't seem a stretch to me."

Donovan and I disagree on this; "violence," which NPR more often uses to describe events in war zones, seems too strong a term to me based on the evidence I have seen so far. And the politics team's own decision to avoid the word "thrown" renders this online-only introduction to Keith's piece misleading, unless other eyewitnesses come forward to clarify the events[.]

CounterPunch took an even more vitriolic approach to correcting the record:

Jon Ralston, the dean of political reporting in Nevada, has spread nothing less than a pack of lies about what went down at the state’s Democratic convention. No chairs were thrown at the convention.

Ralston reported live from the convention for most of the day, but decided to leave before tensions boiled over. Nevertheless, it was taken as a simple fact that he had observed Sanders supporters throwing chairs when “Roberta’s Rules” were enforced with finality at the end of the proceedings.

As it turned out, Ralston finally admitted that he hadn’t seen this himself but was relying especially on local reporter Andrew Davey. Davey first said he had still frames showing the chair throwing which he would publish. He has not produced the stills in question, but did retweet a still image of a chair held high that was initially posted on Reddit.

In spite of the fact that the whole thing was filmed live from multiple angles, no one has any images or video of even a single chair, let alone chairs plural, being thrown.

Rachel Maddow ran a deceptive clip on MSNBC saying chairs were thrown while reportedly showing footage of chairs thrown at a wrestling production. People on social media then insisted that networks had shown actual footage of chairs thrown at the convention. Maddow retreated only a bit by having Ralston on to say that even though he had not seen the chairs thrown, other eyewitnesses have told him the video is wrong. CNN had Debbie Wasserman-Schultz on to denounce Bernie Bros throwing chairs at the stage.

Hours and hours after the woman who took and posted the original video showing the raised chair has offered to talk to any media that will listen, none have. Sanders supporters have now promised to donate $100 to Clinton’s campaign or vote for her in California if anyone can produce video evidence of the phantom chair throwing.