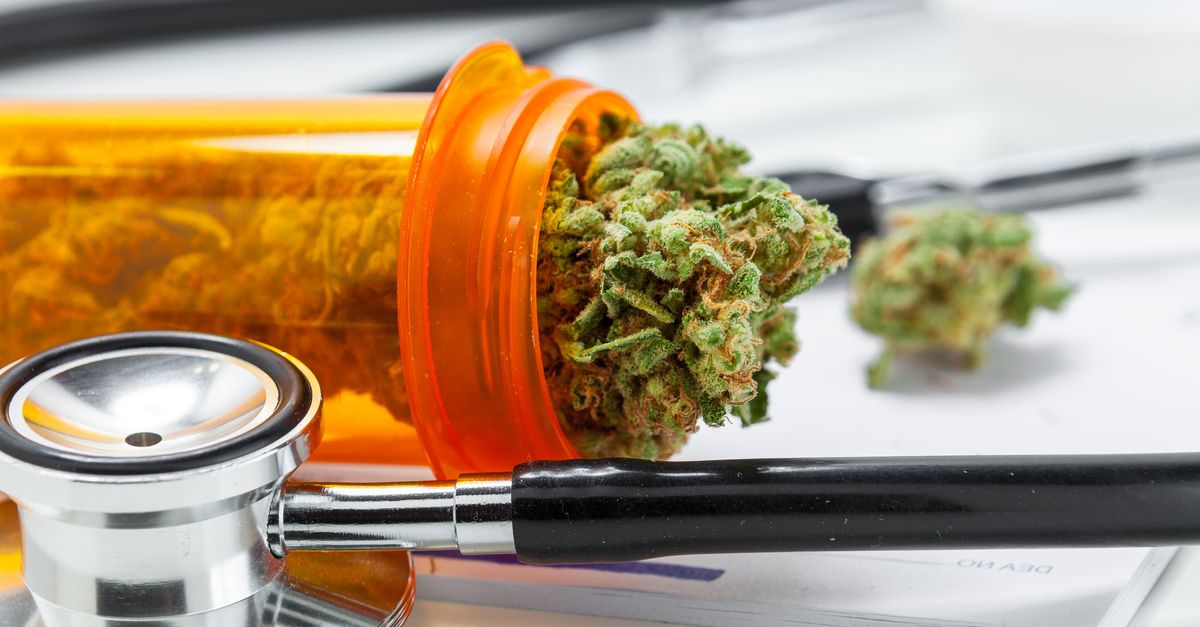 An August 2015 article published on the website PoliticusUSA contains the claim that an update to an National Institutes of Health document included a “quiet” admission that marijuana “kills cancer”:

In just the past two weeks, the federal government and NIH have quietly confirmed that cannabis (marijuana) is very effective at killing cancer cells without harming healthy cells like radiation and chemotherapy.

In fact, on the NIH website devoted to the hideous disease, Cancer.gov, they published the truth about marijuana and its effectiveness at combatting [sic] cancer in a stunning reversal of over four decades of deliberate fear-mongering and propaganda portraying the common weed as dangerous; all to satisfy the greed of the pharmaceutical industry, prison system, and law enforcement agencies at the local, state, and federal level.

That PoliticusUSA story has been, and continues to be, used as source material for variations on a “Cancer Institute Finally Admits Marijuana Kills Cancer” clickbait article that is cloned on a variety of low-rent websites.

The “report” in question is the NCI’s Physician Data Query (PDQ) on “Cannabis and Cannabinoids.” The National Cancer Institute maintains a database of peer-reviewed cancer research and publishes regular updates and summaries of this research in a product called known as a PDQ:

Perplexingly, viral stories citing a 2015 update to this PDQ report as some sort of smoking gun do so for no clear reason. Both the pre-update and post-update versions of the PDQ mentioned laboratory and animal studies that suggest potential anti-tumor effects from cannabis, and both versions include phrases that could be loosely (and falsely) interpreted as “marijuana kills cancer.”

The earliest NIH cannabis PDQ archived on the Internet Archive is a 6 November 2014 version, and the sections related to the potential anti-tumor capabilities of cannabis is identical to the  allegedly nefarious July 2015 update. Both include this statement in the “overview section”:

The mysterious Question 6 (the other item cited by these viral studies as proof of some sort of admission by the government) provides information regarding a number of preclinical trials that have shown some promise at killing cancerous cells. That list includes studies on mice, rats, and cell lines suggesting that some cannabinoids (the group of medically relevant chemicals in cannabis) may be able to selectively kill cancerous cells — including those found in colon, liver, and breast cancers. That list was also not modified in any way between 2014 and mid-2018, save for the addition of one new clinical review added to the PDQ in 2017.

Since the addition of that study occurred after PoliticusUSA published their article, their assertion that the PDQ was changed in a way that could be interpreted as a quiet “admission” of anything regarding anti-tumor potential in July 2015 is false. The PDQ does reference studies that suggest a possible medical role for cannabis in cancer treatment, but to claim that these changes were added “quietly” in 2015 is complete fiction.

Equally made up is the claim that the studies referenced in the PDQ “prove” that cannabis “kills” cancer. The studies referenced in the PDQ are small scale preclinical trials (or reviews of such trials), and therefore they do not “prove” anything with regards to efficacy as a treatment for cancer in humans, which is a broad and diverse groups of diseases unlikely to be “cured” by a single chemical or group of chemicals. The number of drugs or treatments that have demonstrated preclinical potential only to be rejected after further study is prodigious:

The organization Pharmaceutical Research and Manufacturers of America estimates that only 5 in 5,000 compounds that enter preclinical testing make it to human testing, and only 1 of those 5 may be safe and effective enough to reach pharmacy shelves.

A major hurdle preventing human research on cannabis is that the United States government controversially considers it a Schedule 1 drug under the Controlled Substance Act, meaning that the official position is that it has “no currently accepted medical use,” which limits research into its possible medical value. While the anti-tumor studies cited in the NCI PDQ could be part of a broader argument to remove marijuana from that Schedule 1 classification, they do not provide clear evidence that cannabis can be a viable cancer treatment.

Further, a PDQ report, which are merely reviews of scientific studies regularly updated by scientists at the NIH, does not have any bearing on the United States Government’s official view toward cannabis, and is wholly independent of any regulatory bodies or legal or political decision making groups:

PDQ is a service of the NCI. The NCI is part of the National Institutes of Health (NIH). NIH is the federal government’s center of biomedical research. The PDQ summaries are based on an independent review of the medical literature. They are not policy statements of the NCI or the NIH.

Because the article making the claim that the NCI “admitted” that “cannabis kills cancer” uses information from a document that has no legal bearing on federal drug policy, and because that information does not in any way “prove” that cannabis could be a viable treatment for cancer, we rank this claim as false.