Did Mike Huckabee Complain About Michelle Wolf After Mocking 'Triggers' on Twitter?

Two tweets by the former GOP presidential candidate were combined to highlight a discrepancy in his views regarding what should be considered comedy. 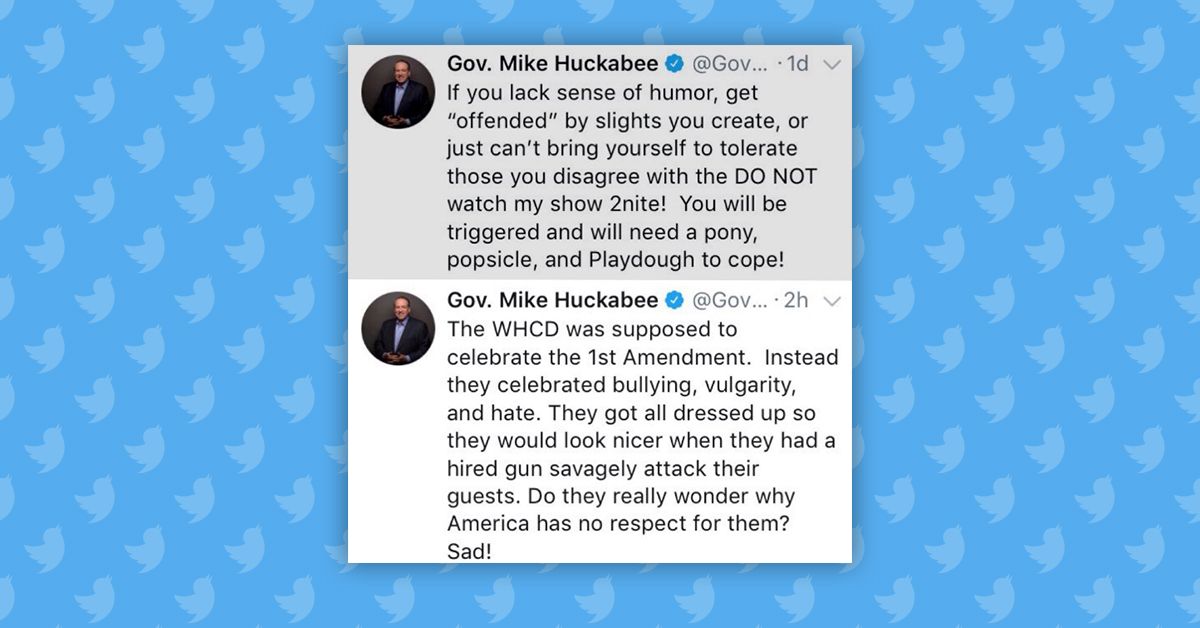 Claim:
Mike Huckabee tweeted that the White House Correspondents Dinner "celebrated bullying" after inviting people to watch his own show unless they lacked a "sense of humor."
Rating:

As offended parties complained about comedian Michelle Wolf's routine at the White House Correspondents Dinner in April 2018, a photograph circulating online highlighted the contrast between that sentiment and some of the critics' earlier stands.

The image, which has been spread nearly 7,000 times on Twitter, shows two tweets from former Arkansas Gov. Mike Huckabee (and father of White House Press Secretary Sarah Huckabee Sanders, who was targeted by Wolf during her set) posted before and after the 28 April 2018 event: The composite picture is made up of two real tweets posted by the former Republican presidential candidate; the first, mocking non-viewers, was posted early in the morning of the dinner to promote Huckabee's talk show on the Trinity Broadcasting Network. The second, published after the dinner, reads:

The WHCD was supposed to celebrate the 1st Amendment. Instead they celebrated bullying, vulgarity, and hate. They got all dressed up so they would look nicer when they had a hired gun savagely attack their guests. Do they really wonder why America has no respect for them? Sad!

Huckabee, as well as other conservatives and "mainstream" media members, have falsely accused Wolf of denigrating  Sanders' looks during her monologue at the event:

At one point Wolf said:

I actually really like Sarah. I think she's very resourceful. She burns facts, and then she uses the ash to create a perfect smoky eye. Maybe she's born with it, maybe it's lies. It's probably lies.

Why are you guys making this about Sarah's looks? I said she burns facts and uses the ash to create a *perfect* smoky eye. I complimented her eye makeup and her ingenuity of materials.

Margaret Taley, president of the White House Correspondents Association, also backtracked regarding Wolf in a statement posted on 29 April saying that the comedian's monologue was "not in the spirit" of her group's mission.