A Twitter user claimed — with no evidence — that the former First Lady ordered the network to cancel 'Roseanne.' 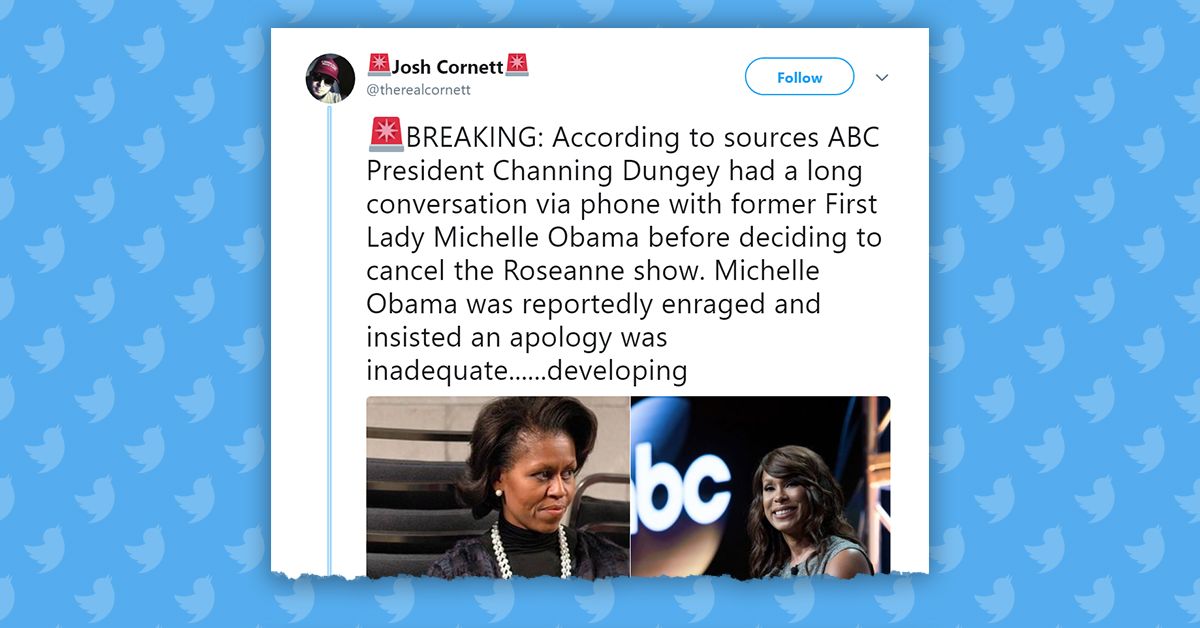 A late May 2018 controversy involving Roseanne Barr and ABC's Roseanne produced a number of rumors. Chief among them were claims that former First Lady Michelle Obama was instrumental in the network's cancellation of the show in response to Barr's controversial comparison of a black woman to an "ape."

On 29 May 2018, Barr retweeted the claim that Michelle Obama had ordered that she be fired: The rumor Michelle Obama was responsible for ABC's decision appeared to come solely from the 29 May 2018 tweet shown in Barr's retweet:

?BREAKING: According to sources ABC President Channing Dungey had a long conversation via phone with former First Lady Michelle Obama before deciding to cancel the Roseanne show. Michelle Obama was reportedly enraged and insisted an apology was inadequate......developing pic.twitter.com/ISgrA6oC7F

On 31 May 2018, Your News Wire published an article with the claim that the "power play" by Michelle Obama is "the clearest sign yet that the Obamas have decided to conquer the entertainment industry," and cited unnamed "sources within ABC" to support the claim:

Michelle Obama Told ABC To Axe Roseanne For Being ‘Pro-Trump’

According to sources within ABC, Michelle Obama was ‘enraged’ and insisted that Roseanne’s apology was ‘inadequate’ in a telephone conversation with Channing Dungey on Tuesday morning.

However, the site's link for the text "sources within ABC" led only to the tweet published by Twitter user Josh Cornett. Cornett's Twitter biography made no mention of any affiliation with ABC, nor did he provide any corroborating information to support his assertion. Cornett later retweeted multiple articles based solely on his (unsourced, uncorroborated) tweet, but we found no information before his 29 May 2018 Twitter post.

Among items later shared by Cornett was a link to a Fox News article referencing the claim as "unproven." On 31 May 2018, Barr tweeted and deleted a remark about "apologizing" to Michelle Obama, Valerie Jarrett, and "GS." Aside from Cornett's initial tweet and blog posts based solely upon it, no other information supported the claim that Mrs. Obama had in any way influenced ABC's decision to cancel Roseanne.