A baseless rumor that Jared Kushner had scrubbed his Twitter account was circulated in the wake of Paul Manafort's indictment. 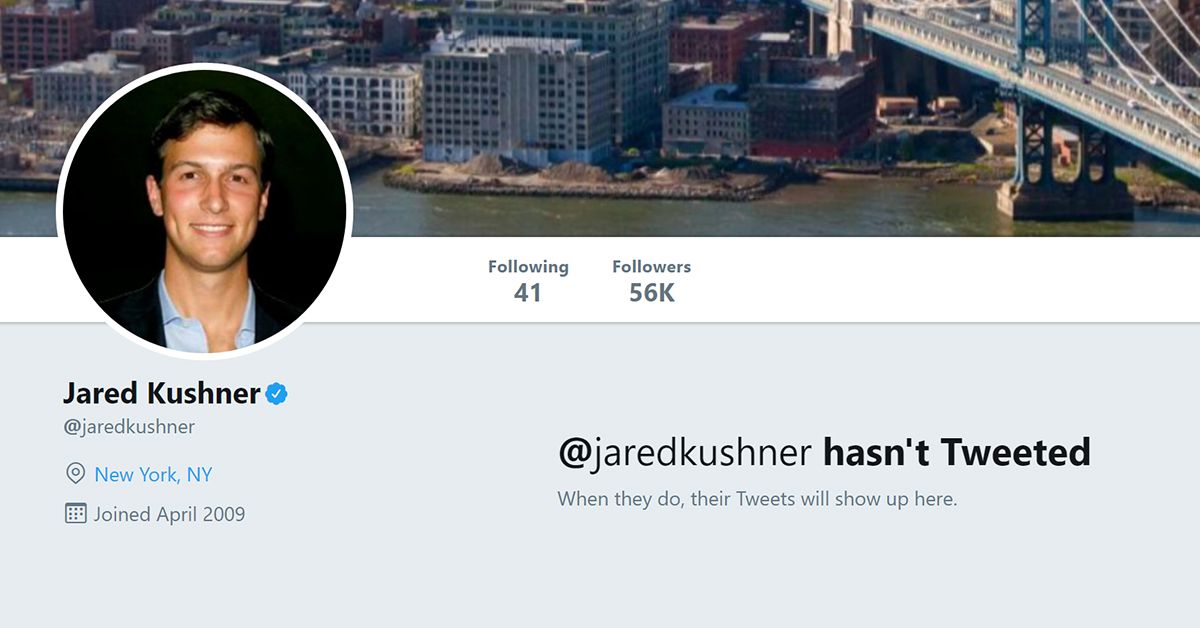 As the indictments rolled, Twitter users falsely accused Jared Kushner of trying to hide his footprints on social media.

Shortly after news broke on 30 October 2017 that President Trump's former campaign chairman Paul Manafort and longtime associate Rick Gates had been indicted on a variety of charges, a rumor started circulating that the Senior White House Advisor had scrubbed his Twitter account in an apparent attempt to cover-up any incriminating messages: The account @JaredKushner does truly belong to President Trump's son-in-law. However, Kushner did not delete any tweets after the Manafort indictments came out.

Kushner has been on Twitter for several years but he has rarely, if ever used the service. In March 2017, Mashable noted how odd it was for the new head of the White House Office of American Innovation to be so unfamiliar with the social media service:

Jared Kushner, son-in-law and Senior White House Adviser to President Donald Trump, is, according to The Washington Post, leading the brand new White House Office of American Innovation, which will be devoted to modernizing the federal government with ideas plucked form the world of business.

It will have a special focus on technology and data.

To better understand how Kushner sees the role innovation can play in modernizing government, we dug up the former real estate mogul and New York Observer publisher's Twitter account.

Kushner, who has a verified Twitter account with 37,000 followers and joined the platform in 2009 (that's eight years ago), has never tweeted.

Kushner's Twitter page has been archived several times by the Internet Wayback Machine and it doesn't appear that Kushner posted anything since Mashable's March 2017 article.

In other words, Kushner didn't "scrub" his account because there was nothing to scrub.

It appears that Kushner has only posted a few messages to Twitter since joining the service. An archived version of Kushner's page from March 2014, for instance, showed only two tweets. One offered a position to a freelance journalist while he was owner of the New York Observer, and the other stated that he was happy to get his name back on Twitter: Both of these messages were deleted by October 2016, more than a year before members of President Trump's campaign were indicted on various charges.