Did a Georgia Lawmaker Tweet a Photograph of Nazis on D-Day? 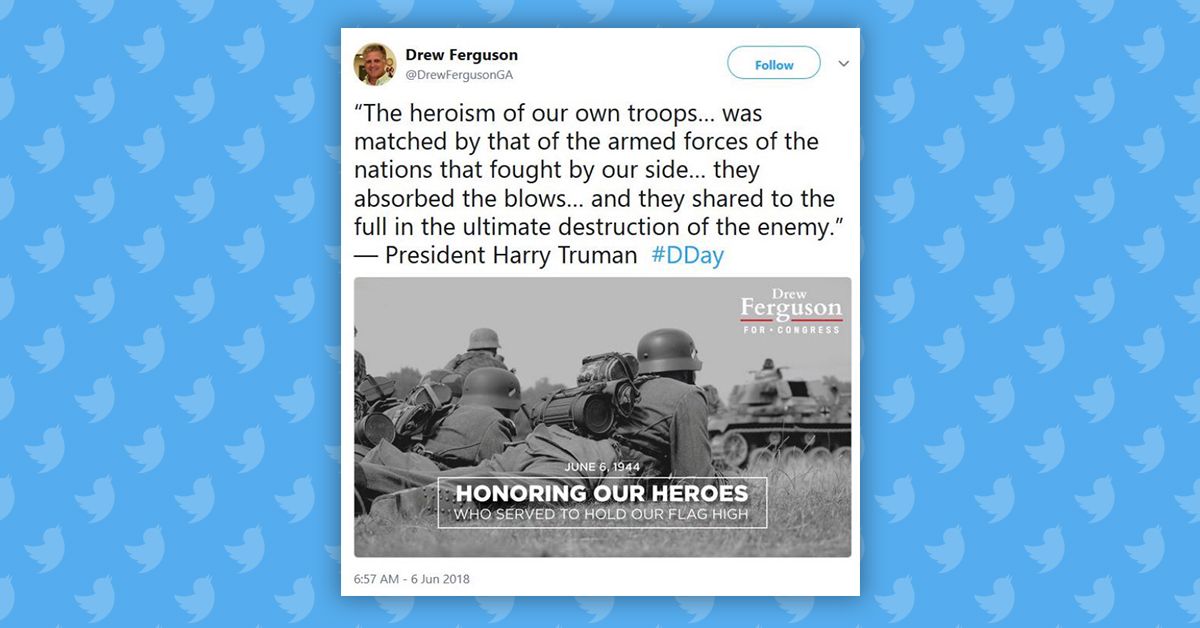 Claim:
Rep. Drew Ferguson posted a picture of Nazi soldiers on Twitter on the anniversary of the Allied invasion of Normandy.
Rating:

A Republican lawmaker from Georgia's attempt to mark the anniversary of the Allied invasion of Normandy resulted in his getting the wrong kind of attention online.

On 6 June 2018, Rep. Drew Ferguson posted a photograph on his Twitter account that depicted Nazi soldiers in front of a tank bearing the Iron Cross symbol: The photograph was accompanied by a quote from President Harry Truman:

The heroism of our own troops.. Was matched by that of the armed forces of the nations that fought by our side.. They absorbed the blows.. And they shared to the full in the ultimate destruction of our enemy

Truman, who took office on 12 April 1945, was not commander-in-chief during the attack. However, the statement is inscribed at the National World War II Memorial in Washington, D.C.

Ferguson's apparent gaffe was reportedly first spotted by a member of the American Bridge organization. The congressman was subsequently mocked online by other Twitter users. While Ferguson himself has not commented on the post on either his personal or his verified account, a spokesman for his campaign told the Atlanta Journal-Constitution that an intern was responsible:

Ferguson spokesman Dan McLagan said the image was selected by an intern at a digital media company that works with the congressman’s campaign.

“As a patriot and the father of a daughter serving in the Navy, Drew is pretty furious about it,” McLagan said in an e-mail. “We deleted the post immediately but the sentiment of heartfelt gratitude and reverence for the men who charged into withering fire on those beaches 74 years ago can never be erased from our hearts.”

Meanwhile, the image of Nazis was deleted and replaced with one showing Allied troops:

“The heroism of our own troops… was matched by that of the armed forces of the nations that fought by our side… they absorbed the blows… and they shared to the full in the ultimate destruction of the enemy.”
— President Harry Truman #DDay pic.twitter.com/6McYGOjgMW