A series of images purportedly showing a strike on a Michigan garage actually show a combination of a meteor, a fire, and a cold-weather phenomenon. 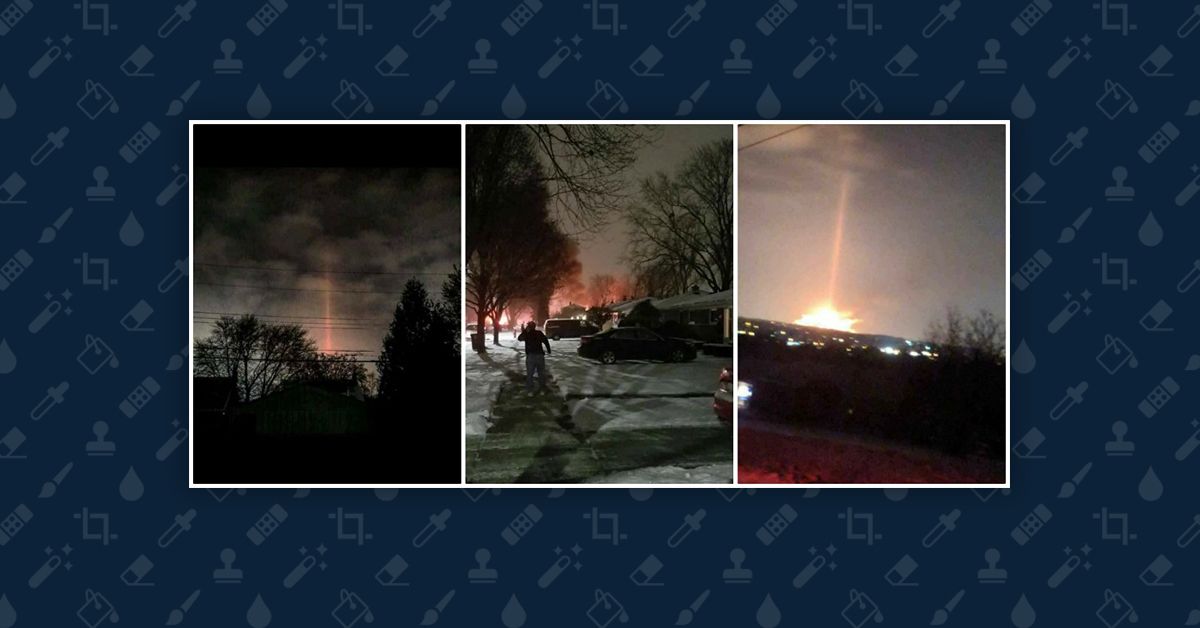 Claim:
A series of images show a "direct energy weapon" striking a city in Michigan.
Rating:

The night of 16 January 2018 was an odd one in Michigan. Not only did a meteor flash across the sky, causing a small earthquake, but a garage went up in flames, and over the border in Ohio, an oil refinery conducted a controlled burn — all at the same time. As images of these three events started to make their way around the Internet, conspiracy theorists concocted a bizarre explanation that tied them all together: the government (or possibly aliens, or maybe both) had unleashed a direct energy weapon on the world:

The web site Before It's News collected some of the most compelling images and summarized the theory:

The Rod of God. A Directed Energy Weapon. Main stream presstituts will have you believe this was a meteor, a meteor that fell at a perfect 90* angle. SMH.. This just happened a few hours ago in Taylor, Michigan. 01/16/18. This energy blast was seen and heard in 4 US states and Canada.

The United States Geological Survey reports a 2.0 magnitude earthquake at 8:09 p.m. January 16, 2018 – exactly the same time a meteor flashed through the sky in Michigan.

The earthquake was a very weak earthquake having what is called a “local magnitude” (Ml) of 2.0. This USGS map shows a “meteorite” notation for the quake. A 2.0 magnitude earthquake would not be felt by humans.

This is confusing because all the Meteor videos I can find for this day on YouTube show something else entirely than these photographs. The videos show like a regular ole meteor going thru the air. But these pictures show a percise ray of energy beamed down lighting the ground on fire. Could this be the same tech causing the wildfires all over the USA aka California etc? I don’t know. That is why I am sharing this for discussion.

A meteor really was visible over Michigan on 16 January 2018. This was confirmed by the United States Geologic Society, NASA, the National Weather Service, astronomy experts, and a number of eyewitness videos:

It's also true that the videos of the meteor passing over Michigan do not resemble the photographs that appeared to show a ray of light. But that's because those photographs don't actually show the meteor.

The center photograph in the collage above was most likely taken near a garage fire in the city of Taylor, Michigan. As news of the fire spread, so did rumors that the blaze was caused by a meteor crashing into the garage. Michigan news outlet MLive published a story about the phenomena, informing worried readers that the blaze was not actually started by a meteor crashing into it:

A fire that destroyed a pickup truck inside a garage in the metro Detroit community of Taylor was not started by a piece of falling meteor fragment.

Fire crews were called to a garage fire at about 8:24 p.m., Jan. 16, on Merrick Road after the homeowner noticed smoke coming from the engine compartment of a pickup he was working on inside the garage, according to the Taylor Fire Department.

Images showing a bright streak of light soaring up into the sky likely show an oil refinery in Ohio conducting a controlled burn which caused "light pillars" (a visual effect that can occur in very cold winter weather) to appear in the sky. A number of people captured images of this refinery fire and the resulting light pillars: Local news outlets such as Click On Detroit<Cleveland 19, and Fox 2 Detroit all published articles in January 2018 about these light pillars' forming:

They look like lights from an alien spaceship, but they are actually light pillars, a spectacular sight most commonly seen during the colder winter months.

The phenomenon's name describes narrow rods that appear to extend from the sky to the ground.

Although the images do show something that resembles alien weapons used in movies such as Independence Day, these particular photographs do not document the deployment of such a device. Rather, the light pillars just happened to appear around the same time that a meteor was spotted streaking across the sky in Michigan, creating the perfect conditions for conspiracy theorists to spread rumors about otherworldly weaponry.