Some elements of a viral post about Melania Trump's jacket are factual, but there's no proof it referenced the fascist slogan "me ne frego." 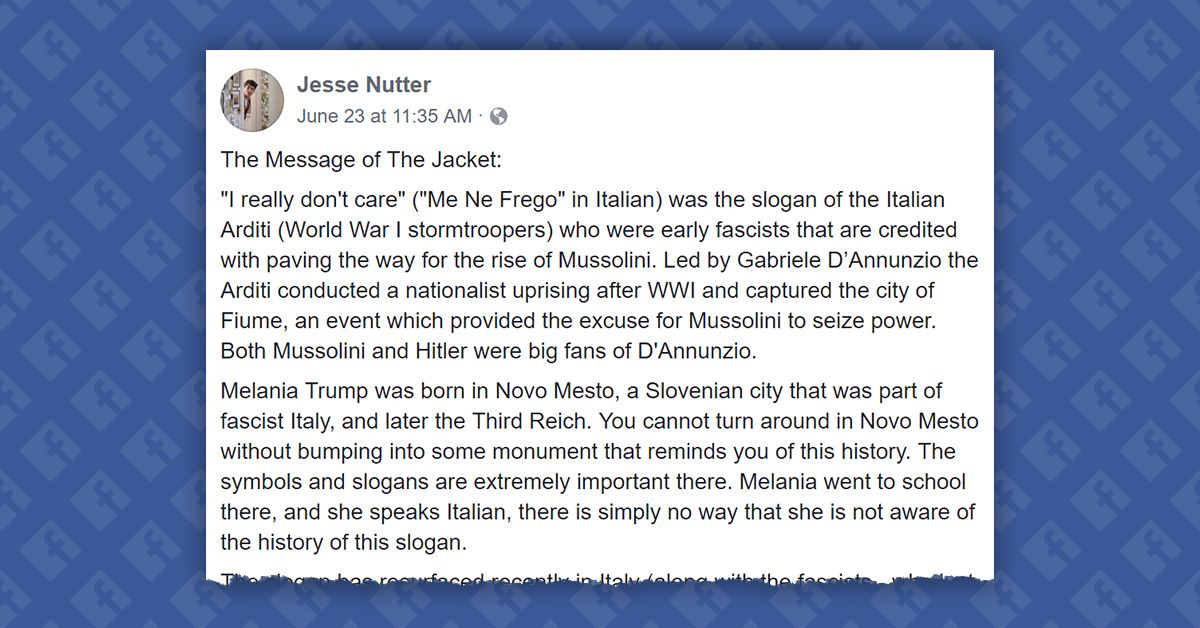 Claim:
Melania Trump made a sly reference to the Mussolini-era slogan "me ne frego" with her "I DON'T REALLY CARE DO U?" jacket.
Rating:

On 23 June 2018 Facebook user Jesse Nutter published a status update about a controversy over a jacket worn by First Lady Melania Trump, claiming that the garment she wore as she stepped on a plane to meet with children in detention camps (which had "I DON'T REALLY CARE DO U?" emblazoned across the back) had a subtle historical message that underlay its not-at-all subtle slogan:

"I really don't care" ("Me Ne Frego" in Italian) was the slogan of the Italian Arditi (World War I stormtroopers) who were early fascists that are credited with paving the way for the rise of Mussolini. Led by Gabriele D’Annunzio the Arditi conducted a nationalist uprising after WWI and captured the city of Fiume, an event which provided the excuse for Mussolini to seize power. Both Mussolini and Hitler were big fans of D'Annunzio.

Melania Trump was born in Novo Mesto, a Slovenian city that was part of fascist Italy, and later the Third Reich. You cannot turn around in Novo Mesto without bumping into some monument that reminds you of this history. The symbols and slogans are extremely important there. Melania went to school there, and she speaks Italian, there is simply no way that she is not aware of the history of this slogan.

The slogan has resurfaced recently in Italy (along with the fascists - who just won an election in Italy). Steve Bannon, Sebastian Gorka, and Stephen Miller are all huge fans of the resurgent fascist movement in Italy.

The company that makes the jacket in question is ZARA, a company that was written up in Forbes in 2014 for antisemitism. They also produce a "concentration camp" striped shirt with a yellow star, a swastika handbag, and a Pepe the Frog shirt.

The message of the jacket could not be any clearer: Melania was telling us that the Trumps are fascists and she is tired of pretending otherwise.

And I'm still wondering how many times they have to show us who they are before we believe them.

Nutter later shared a meme published by the Facebook group "The Other 98%," which appeared to have been based on his post:

I just gotta say though.... if you're going to edit my text, don't edit it to add in factual inaccuracies. I didn't write that ZARA was an Italian designer. That's the only part of this text that they changed (aside from bits they cut out) and they changed it to say something that is both false and irrelevant. So weird.

(ZARA is a spanish clothing company, not an Italian designer)

In the post that originally went viral in screenshot form, Nutter claimed that Melania Trump's jacket was a reference to a World War I slogan used by Italian fascists. The post suggested "I really don't care" translated to "me ne frego," more commonly translated as "I don't give a damn." He concluded that the First Lady saying "the Trumps are fascists and she is tired of pretending otherwise."

In a 25 March 2016 thread published to the strictly curated r/AskHistorians subreddit, a user provided historical nuance for the phrase:

Comment from discussion Why was "Me ne frego" ("I don't care") chosen by Mussolini as one of his mottoes?.

By contrast, President Trump offered an explanation of the message on his wife's jacket on 21 June 2018, two days prior to Nutter's post:

“I REALLY DON’T CARE, DO U?” written on the back of Melania’s jacket, refers to the Fake News Media. Melania has learned how dishonest they are, and she truly no longer cares!

It seems to be a stretch to suggest that the "I REALLY DON'T CARE, DO U" jacket was a slick reference to the Italian phrase "me ne frego," or "I don't give a damn." Determining intent is usually purely speculative, for starters. On top of that, the translation was not exact.

Although it is remotely possible that Mrs. Trump sourced a Zara jacket that just so happened to bear a WWI fascist phrase, it was similarly possible that the phrasing was, as stated by Trump's spokesperson, meant to be taken at face value.