China's "artificial sun" is located in China, not space. 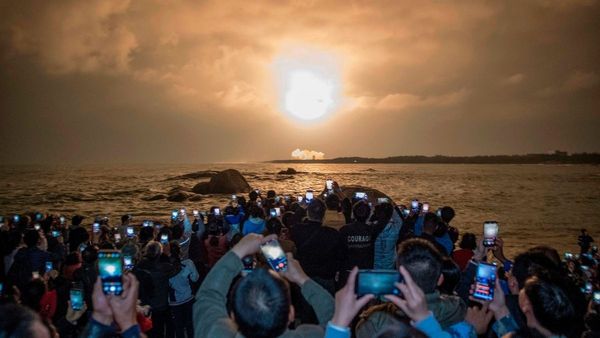 Image Via STR/AFP via Getty Images)

In January 2022, a video supposedly showing China launching an artificial sun racked up millions of views as it circulated on social media:

This video does not show an artificial sun being launched by China. This is just a video of a rocket launch.

One reason some social media users may have been taken in by this miscaptioned video is that China truly has developed a so-called "artificial sun." This project consists of a nuclear fusion device called 'HL-2M' tokamak that is capable of generating superheated plasma in excess of 125 million degrees Fahrenheit. However, this device has not been launched into space. It is located at the Southwestern Institute of Physics (SWIP), in the Sichuan Province of China. China's "artificial sun" has set a new world record after superheating a loop of plasma to temperatures five times hotter than the sun for more than 17 minutes, state media reported.

The EAST (Experimental Advanced Superconducting Tokamak) nuclear fusion reactor maintained a temperature of 158 million degrees Fahrenheit (70 million degrees Celsius) for 1,056 seconds, according to the Xinhua News Agency. The achievement brings scientists a small yet significant step closer to the creation of a source of near-unlimited clean energy.

Gong Xianzu, a researcher at the Institute of Plasma Physics of the Chinese Academy of Sciences who is in charge of the experiment, said in a statement:

China's artificial sun has not been launched into space. The viral video shown above shows an unrelated rocket launch that was miscaptioned.

We haven't been able to identify the specific source of this video, but it appears to show a rocket launch at the Wenchang Space Launch Center in Wenchang, Hainan, China. A number of other videos show crowds on the beach outside of the launch center watching rocket launches. The following video (as well as the photograph at the top of this article), for example, shows a group of spectators watching a similar "sun-shaped" ball of light that was part of a December 2019 rocket launch: