Add this to the list of misleading claims about the president's health. 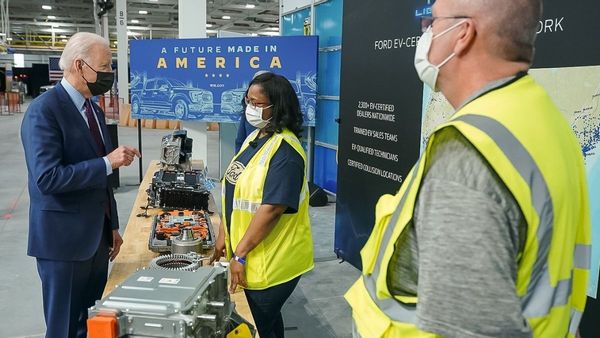 On May 19, 2021, U.S. President Joe Biden stopped by the Ford River Rouge Complex in Dearborn, Michigan, to tour the company's production facility for the new all-electric F-150 Lightning. At the end of the visit, Biden said that he was a "car guy" and that he would like to test drive the new vehicle. Ford obliged, and the president took a spin in the new electric vehicle, saying at the end of the ride that "this sucker's quick."

Here's a video of Biden's test drive from The Associated Press:

While this moment was largely uneventful (although some took issue with a joke Biden made about hitting a reporter), hyperpartisan news outlets and social media personalities claimed that this video actually documented a deepening conspiracy about Biden's health. The website Gateway Pundit published a slow-motion clip taken from C-SPAN's footage and claimed that it showed how Biden was "faking" this test drive, and that the truck was actually being controlled by the person in the passenger seat via a second steering wheel.

WOW! Biden Caught Fake Driving — Someone Else Is Steering Vehicle — It Was All a Stunt! — VIDEO and PICS

Following his speech, the declining septuagenarian was put in an electric vehicle where he pretended to be driving. This was all a show by his handlers to make Joe Biden look like he’s in charge.

Biden did not "fake" drive this truck, and this all-electric vehicle was not equipped with two steering wheels. Mike Levine, Ford North America product communications manager, confirmed to the automative news website Jalopnik  that “there was no other set of controls" in the vehicle Biden drove.

The object the Gateway Pundit claims the passenger is holding in this video is not a steering wheel. It's a camera. It appears that the secret service agent was simply reaching out to make sure that this camera didn't fall off the dashboard. Here's an enlarged image showing this moment. The Gateway Pundit's main piece of "evidence" for the double-driver conspiracy theory is superimposed in the top left: This moment is more clearly visible in the original video from from C-SPAN.

The claim that Biden "fake" drove this vehicle can also be disproven by the fact that this drive wasn't entirely scheduled. If you noticed in these videos, there is some odd material hanging on the side of this all-electric F-150 Lightning. This is not part of the design of the vehicle that will be available for purchase. This is a sort of camouflage that the company uses to obscure the public's view of vehicles before they are officially released.

The Detroit Free Press reported that Ford had to scramble a little after Biden asked to test drive one of their vehicles.

President Biden, 78, whose father sold Fords back in the day, wrapped up his remarks on Tuesday at the new plant in the Rouge complex designed to build the all-electric F-150 Lightning and it all seemed routine to those present.

"At the end of his speech, he kinda turned to everyone, he goes, 'You know I'm a car guy. And I want to drive this truck.' Everyone politely laughed. Because presidents don't drive vehicles,'" Ford CEO Jim Farley told the Free Press ...

And then it happened.

"Lo and behold, I get a tap on my shoulder (apparently from White House staff) at the very end of the event," Farley said. "They said, 'Mr. Farley, we'd like you to come with us to the motorcade because we want to go to the test track and drive the truck."

So Farley and chief engineer Linda Zhang went together to a Ford test track nearby.