Did a Gay Baboon Terrorize an African Village?

Rumors about a gay baboon's "terrorizing" a village and raping five men can be traced back to a homophobic fake news article. 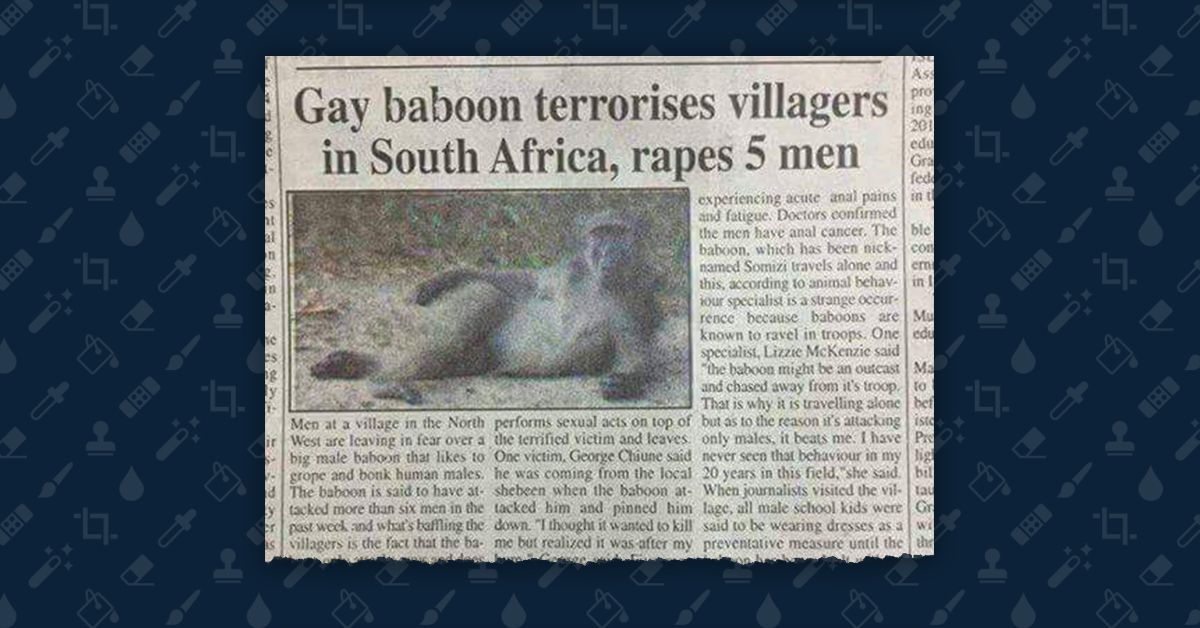 An image purportedly showing a newspaper clipping featuring a story about a gay baboon raping several men near an African village regularly gets shared on social media: This is not a genuine news story, but a verbatim copy of a satirical article that was first published in April 2017 on the South Africa Morning Post web site:

Men at a village in the North West are leaving in fear over a big male baboon that likes to grope and bonk human males.

The baboon is said to have attacked more than six men in the past week and what’s baffling the villagers is the fact that the baboon only attacks guys and does not hurt it’s victims but rather performs sexual acts on top of the terrified victim and leaves.

One victim, George Chiune said he was coming from the local shebeen when the baboon attacked him and pinned him down.

The baboon, which has been nicknamed Somizi travels alone and this, according to animal behaviour specialist is a strange occurrence because baboons are known to ravel in troops. One specialist, Lizzie McKenzie said “the baboon might be an outcast and chased away from it’s troop. That is why it is travelling alone but as to the reason it’s attacking only males, it beats me. I have never seen that behaviour in my 20 years in this field,” she said.

When journalists visited the village, all male school kids were said to be wearing dresses as a preventative measure until the baboon has been dealt with.

A cached version of the page shows that this article was filed under the "satire" tag. Furthermore, the description on the web site's Facebook page states that the South Africa Morning Post publishes "Satire, Entertainment, Rumours and Bizarre stories from South Africa, and sometimes around the world."

The person behind the Morning Post also mentioned the "gay baboon" article in an interview with the Mail & Guardian Africa. The unidentified writer used the homophobic text as an example of the fake news stories he publishes in order to fund his purportedly genuine journalistic efforts:

Advertising can’t fund his journalism either. His real news site attracts just a fraction of the audience of his fake news sites and, therefore, a fraction of the income. “There aren’t that many people interested in politics. I can earn a few hundred dollars a month from my news site, it performs so badly. But stuff about gay baboons, stuff about pastors saying they went to heaven, that goes viral,” he says.

It is still unclear whether this fake news story was ever picked up by a genuine newspaper.  The text at the bottom of the story states that it was "printed by Hassan Mohiuddin at City Press, Talpur Road, Kara(...)" which appears to refer to a newspaper located on Talpur Road in Karachi, Pakistan. However, we could not locate a publisher or publication called "City Press" in Pakistan or an editor named Hassan Mohiuddin.

Finally, we feel it is our responsibility to clear the pictured baboon's name. Although we are unsure who took the photograph, the earliest iteration we could find was posted to the web site Iloho.com by "oliviam" in August 2009 and shows a baboon relaxing in — not terrorizing — Cape Point, South Africa. The photograph was entitled "Baboon Beauty Queen":