Did 'Antifa' Stab a Vermont Man for Not Condemning a Nazi?

Sam Wormer contradicted a dubious account of an injury he posted on social media. 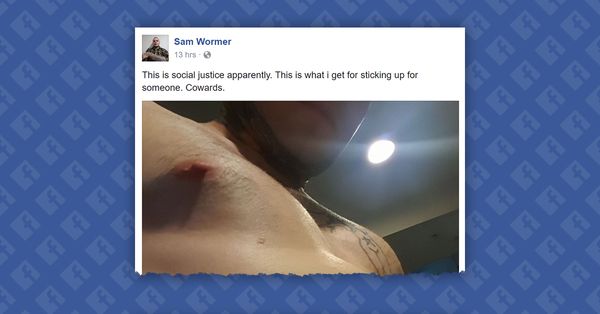 Claim:
A group of anti-fascists attacked and stabbed a man outside his home in Vermont for not condemning a local white nationalist.
Rating:

On 16 August 2017, the right-wing web site BigLeaguePolitics.com reported that a Vermont man was attacked by an "antifa mob" — a description the alleged victim said did not come from him.

Sam Wormer, the subject of the story, told us that he was met by five men outside his home a night earlier. Two of the five men, he said, attacked him directly while the other three "just kinda hung back," but he disputed the story's premise blaming anti-fascist groups:

I honestly dont think antifa had anything to do with this. I personally believe this was a false flag attack perpetrated by the far right to further their own agenda.

Big League Politics interviewed Wormer after he posted a picture of himself on his Facebook page with a visible cut to his stomach, which he told us came from a box cutter blade. The caption read:

This is social justice apparently. This is what i get for sticking up for someone. Cowards. Wormer's attackers have not been identified. He said that even though he was called a "Nazi" and a "fascist", he did not describe them as being anti-fascists, either. He said there is a loosely organized antifa group in the area, which contacted him after the incident "trying to figure out what happened [and] who's responsible, and have been very very supportive".

Wormer, who has not sought medical attention but filed a police report after the attack, first attracted media attention when he was interviewed in a Burlington Free Press story about Ryan Roy, a local man who was fired from his job after being identified as one of the participants in a white supremacist march held in Charlottesville, Virginia on 11 August 2017.

Roy described himself as a white nationalist and supporter of President Donald Trump to the Free Press. He also said:

Obviously I would advocate for racial separation and racial nationalism or repatriation or even a return to — our country was a white country up until the 1965 Hart-Celler Immigration Act.

That legislation, which was signed into law by then-President Lyndon B. Johnson on 3 October 1965 and went into effect in June 1968, did away with quotas for immigrants to the U.S. based on their country of origin and instead gave priority to immigrants whose relatives already lived in the country, as well as those with "specialized skills.".

According to Wormer, he was "completely shocked" to see Roy in a Vice News report about the rally and did not agree with his beliefs, but still opposed subsequent demands online for him to be fired or lose custody of his child.

Taking away somebody's job and livelihood — I mean, that's just adding fuel to the fire. I don't think any good is going to come of this on anybody's side.

He said that he was attacked shortly after he made a separate comment about Roy on Facebook, which read:

I believe he's doing what he truly believes is right, and despite all the anger and hate pointed his way right now he stands by his choices. There's a lot to be said for that. I respect him for that, and I won't stand with those people who are trying to have Ryan's child taken away or have him fired. I can't, he and his family have done too much for me. Sorry but my allegiance is with Ryan no matter his choice, even if I can't agree with him. You can hate me for it, but I stand with my decision and if any violence comes his way I will stand with him. I don't agree with his actions but he has stuck up for me and other marginalized people when nobody else would. That is what family does.

Wormer said besides the attack on him, his roommate and his roommate's mother also received death threats, including "a threatening call". Wormer also told us that Roy contacted him after the attack:

He and his mother both reached out to me and made sure I was okay and safe, and thanked me for standing up for him.

Police in Essex Junction, where Wormer lives, told us they have "nothing currently to report" on the matter. But Wormer said he would press charges if the people responsible were caught.

"I don't want anyone else to get hurt," he said.