Did an Alabama Church Display a Sign Comparing Roy Moore to Jesus?

Living Way Ministries said its pastor did not approve of the sign, but at least two other churches were also caught using a blatantly political sign. 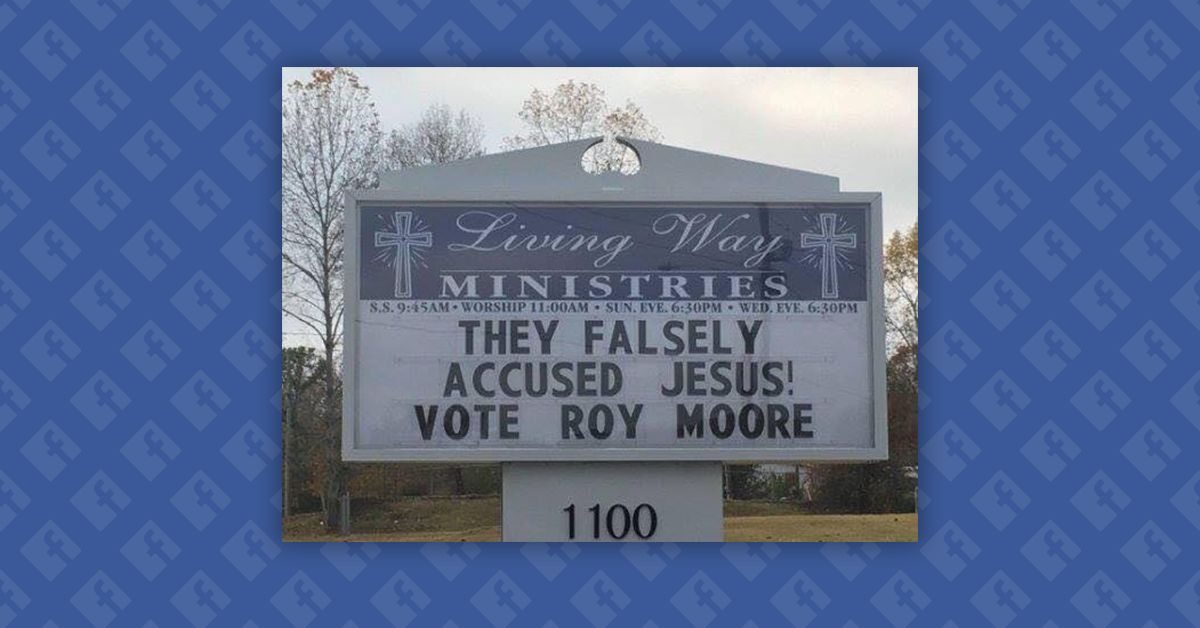 Churches in Alabama and Florida were caught in violation of the long-standing law barring them from engaging in political speech when they expressed support for Alabama senatorial candidate Roy Moore.

Two pictures circulating online beginning on 30 November 2017 showed a billboard that appears to belong to Living Way Ministries in the Alabama town of Opelika. The alleged church billboard has a number under the display, which matches the church's street address. The billboard read: Moore, a Republican who was removed twice from the state's Supreme Court for failing to comply with judicial rulings, has been accused by several women of harassing and molesting them when they were teenagers. On 4 December 2017, President Donald Trump — who has also been accused of assault by numerous women — endorsed Moore.

We called Living Way three times seeking comment. After not answering the first time, an unidentified person at the church hung up when we identified ourselves as Snopes.com. The third time, the phone went to what sounded like a fax machine.

However, a reader provided us with a second picture of the billboard: The reader told us:

It is not unusual for the church to post extreme messages. However ... I was so flabbergasted I wanted to share with other like-minded individuals. That's when I turned the car around and posted the picture.

The reader, who is being cited anonymously for safety reasons, told us she posted it to a local Facebook group that is closed.

Freedom From Religion Foundation co-president and co-founder Annie Laurie Gaylor also confirmed to us that her organization had received the same photograph.

In a local news report on 4 December 2017, the church admitted that their billboard displayed a pro-Moore message, but did not say who was responsible. Instead, an unidentified woman said "several people" had keys allowing them to change the billboard. But the church's pastor, she said, asked for the message to be taken down two days after it was first displayed.

The reader, though, challenged the church's account, saying that the billboard "was changed twice within hours of my photo surfacing." Regarding the attention the photo had garnered online, they said:

I was very surprised by how quickly and far it spread. At times, nervous because some of [Moore's] supporters can be extremists. However, glad to bring to light an issue here in Alabama and unfortunately [to] how many of our citizens view politicians.

Currently, [federal] law prohibits political campaign activity by charities and churches by defining a 501(c)(3) organization as one "which does not participate in, or intervene in (including the publishing or distributing of statements), any political campaign on behalf of (or in opposition to) any candidate for public office."

An FFRF spokesperson told us on 5 December 2017 that the organization contacted the Internal Revenue Service regarding the display at Living Way Ministries.

Trump vowed to "totally destroy" the prohibition during the National Prayer Breakfast in February 2017. The House version of the Republican-led Tax Cuts and Jobs Act contains a provision repealing the law, commonly known as the Johnson Amendment. However, that provision does not appear in the Senate version of the bill, which was passed on 2 December 2017.

A second reader also sent us a photograph of a pro-Moore billboard outside another Opelika church, Marvyn Parkway Baptist: The pastor of Marvyn Parkway Baptist Church, David Floyd does indeed support Judge Roy Moore for the U.S. senate seat up for election, Pastor Floyd has said that he believes Judge Moore, when he says the allegations are not true. Pastor Floyd has also said that Judge Moore has a faithful testimony defending the constitution, the unborn, the right to acknowledge God in the public arena, and Biblical marriage all of which are important to the well being of our state and nation.

Yet another pro-Moore display was spotted at First Conservative Baptist in Jacksonville, Florida. First Coast News posted this photo of the sign: When reached by reporters, Pastor Gene Youngblood told them to leave his church and called them "fake news," echoing a common complaint from the president.

A fourth photograph of a display from "Temple Baptist Church" allegedly supporting Moore, however, is false: There is a church by that name in Alabama, located in Cullman. But a spokesperson from Temple Baptist called us to confirm that the picture was not taken at their church and was instead a digitally-altered version of the billboard of another church by the same name in Las Cruces, New Mexico.

Max Perkins, the pastor at the Las Cruces Temple Baptist Church, confirmed that his church's billboard had been used as the basis for several fake "messages." He said:

We've not advocated anything about Roy Moore or any political vote that should be made, or anything that's personal like that between you and the lord and your political position.