Did Al Capone Demand an Inquiry Into Whether the Justice Department Surveilled His Gang?

The fake Chicago Tribune headline is a play on a real one involving President Donald Trump. 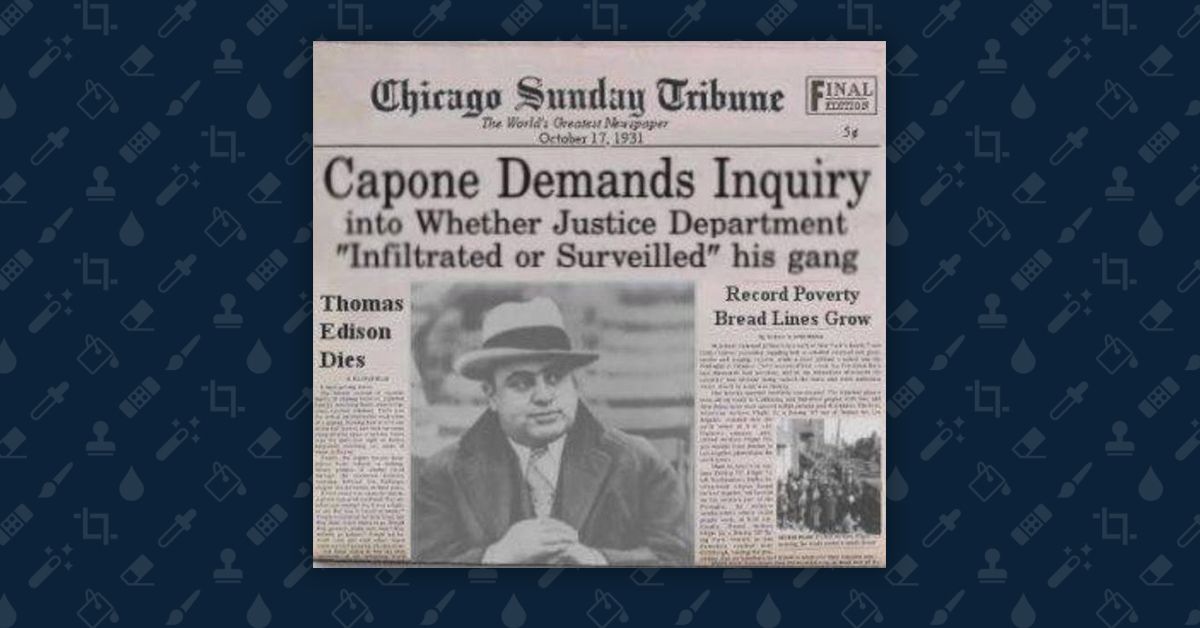 Claim:
Notorious mobster Al Capone demanded an inquiry into whether his gang was surveilled or infiltrated by the Department of Justice.
Rating:

On 20 May 2018, United States President Donald Trump stated in a message posted to social media platform Twitter that he wanted the Department of Justice to investigate whether it "infiltrated or surveilled" his political campaign at the behest of his predecessor:

I hereby demand, and will do so officially tomorrow, that the Department of Justice look into whether or not the FBI/DOJ infiltrated or surveilled the Trump Campaign for Political Purposes - and if any such demands or requests were made by people within the Obama Administration!

The president had been fuming on Twitter about mid-May 2018 revelations that the Federal Bureau of Investigation had an informant talking to key members of his presidential campaign and accusing former U.S. President Barack Obama of sending the Justice Department to spy on it for political purposes.

The FBI's activities have culminated into what is now an ongoing Department of Justice investigation led by Special Counsel Robert Mueller into Russian meddling in the election. The investigation has lead to indictments of several key Trump campaign associates, including its former chairman.

The New York Times reported on the tweet with a story headlined, "Trump Demands Inquiry Into Whether Justice Dept. ‘Infiltrated or Surveilled’ His Campaign," which inspired a satirical but fake image purporting to show a headline comparing the DOJ investigation to the one that brought down notorious Chicago mobster Al Capone in 1931: The image above is not a real copy of the Chicago Tribune and there are a few tells, including the fact that 17 October 1931 was a Saturday, not a Sunday as the paper's masthead in the fake image denotes. The actual headline for the lead story reporting Capone had been convicted of tax evasion read, "U.S. Jury Convicts Capone." That story was published in the 18 October 1931 edition of the Tribune.

From the archives: On Oct. 17, 1931, Al Capone was found guilty of tax evasion. He would later be sentenced to 11 years in prison. https://t.co/uFx3oncrc8 pic.twitter.com/Q3MXNqqcjQ

Capone was a Chicago gangster who gained influence bootlegging liquor during Prohibition. He was finally convicted on tax fraud charges resulting from an FBI investigation that nabbed him despite a public corruption scheme in which he paid off police and officials that allowed him to operate with relative impunity for years.

Hirschfeld Davis, Julie, and Goldman, Adam. "Trump Demands Inquiry Into Whether Justice Dept. ‘Infiltrated or Surveilled’ His Campaign."   The New York Times 20 May 2018.