The prominent Labour Party MP appeared to have an unusual wardrobe malfunction in December 2019. 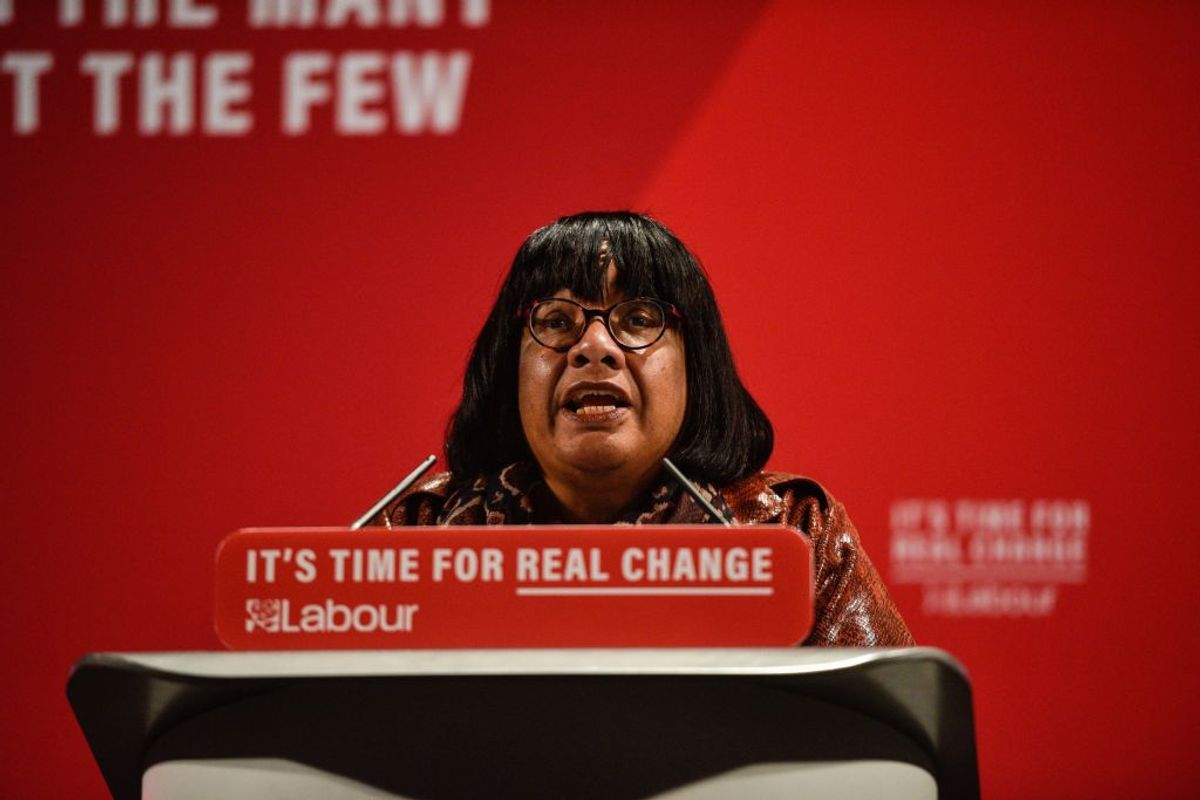 In December 2019, readers asked us about reports that claimed that Diane Abbott, a prominent Labour MP in the U.K. and the party's spokesperson on Home Affairs, had posed for photographs on the day of the U.K. general election, wearing two odd shoes, one of which appeared to have been on the wrong foot.

Based on several photographs posted by different Twitter users including Abbott herself, it's clear that on Dec. 12, Abbott at several times wore mismatched shoes. Though she also appears to have worn two left shoes, we can't verify that particular claim definitively.

In the 24 hours leading up to the 2019 general election on Dec. 12, Abbott canvassed in several London constituencies on behalf of party colleagues standing for election. (In her own constituency of Hackney North and Stoke Newington, Abbott ended up re-elected with a massive majority, winning more than 70 percent of votes, though the Labour Party as a whole lost seats and the Conservative government greatly expanded its parliamentary majority).

At 8:32 a.m., Abbott posted to Twitter a photograph of herself standing with Labour activists outside Dalston Junction train station in the London borough of Hackney:

She wore mismatched shoes in that photograph, and the curve of the shoe on her right foot suggests it was a left-foot shoe, as this magnified version of the photograph shows. However, that curve might simply be a result of Abbott's stance.

At 9:06 a.m., a Twitter user posted two photographs taken outside Dalston Kingsland train station, again in the borough of Hackney. In one of them, Abbott posed alongside the user, a young boy, and Meg Hillier, Labour candidate for the adjoining constituency of Hackney South and Shoreditch (standing to Abbott's left in the photograph):

In that photograph, Abbott again wore mismatched shoes. The curve on the right shoe suggests it was intended to be worn on her left foot, but again, we can't definitively verify that based only on the photograph. At some point in the morning, likely at the same time Abbott and Hillier were photographed together, Hillier herself posted a photograph to Twitter, which showed just herself and Abbott standing together, again outside Dalston Kingsland train station. The tweet was later deleted, but several Twitter users took screenshots of it:

Again, a magnified version of the photograph clearly shows that Abbott was wearing mismatched shoes. Although not definitive, the shoe on her right foot again appears to be intended for a left foot. Some Twitter users argued that the picture posted by Hillier was later altered, and that other photographs taken on Election Day showed that Abbott was, in fact, wearing properly matched shoes. Those arguments were fatally flawed.

It's possible that Hillier's photograph originally showed Abbott wearing two shoes from the same pair, and that image was later edited by third parties, after Hillier's tweet was deleted, but this makes no sense. Those doing the editing would merely have been digitally altering Abbott's right foot in order to make it look exactly as it did in two other photographs — one posted by a supporter of Abbott's, and the other posted by Abbott herself.

Anyone suggesting that all photographs showing Abbott with mismatched shoes were manipulated would, by necessity, have to support a hypothesis in which Abbott herself took the time on Election Day morning to — for some reason that defies explanation — arrange for her own photograph of herself, taken at Dalston Junction, to be digitally edited so as to falsely appear as if she were wearing mismatched shoes, and then upload that digitally edited version to Twitter via her Android cellphone at 8:32 a.m.

The claim that other photographs taken on Dec. 12 show Abbott with properly matched shoes was inaccurate. One user replied to multiple tweets about Abbott's shoes, accusing various others of being "sheep" and of "contributing to fake news" and displaying "ignorance." In support of those charges, the user pointed to another photograph of Abbott that showed her wearing properly matched shoes, claiming "here is what she is actually wearing":

However, that particular photograph could not have been taken on Dec. 12, because Abbott posted it to Twitter on the afternoon of Dec. 11, when it was likely to have been taken:

It's understandable that that user and others thought the photograph was taken on Election Day, because Abbott posted it to Twitter at 9 a.m. that morning, along with several others. It shows her canvassing with Marsha de Cordova, Labour's candidate in the southwest London constituency of Battersea:

However, the photograph in question was actually taken on the previous day, Dec. 11. Although not the same photograph, Abbott tweeted out an almost identical one at 6:47 p.m. the night before — showing the exact same group of individuals, standing in the exact same positions:

Clearly, the photograph Abbott posted at 9 a.m. on Election Day came from the previous evening's canvass in Battersea, as this side-by-side comparison shows:

It's unclear why or how Abbott came to wear odd shoes on Election Day. One of the shoes might have been required for therapeutic purposes or to aid recovery from an injury, or the mismatch might have been caused by absent-mindedness or the result of an Election Day rush to go canvassing. We invited the Labour Party to provide any relevant information or context, or an explanation for Abbott's attire in the photographs, but we received no response.

Wilcock, David.  "Labour's Diane Abbott is So Keen to Cast Her Vote She Appears to Have Rushed Out Wearing Mismatching Shoes."   The Daily Mail.  12 December 2019.