An alarmist article about what the United States is purportedly doing with people showing up at its southern border bears little resemblance to the facts. 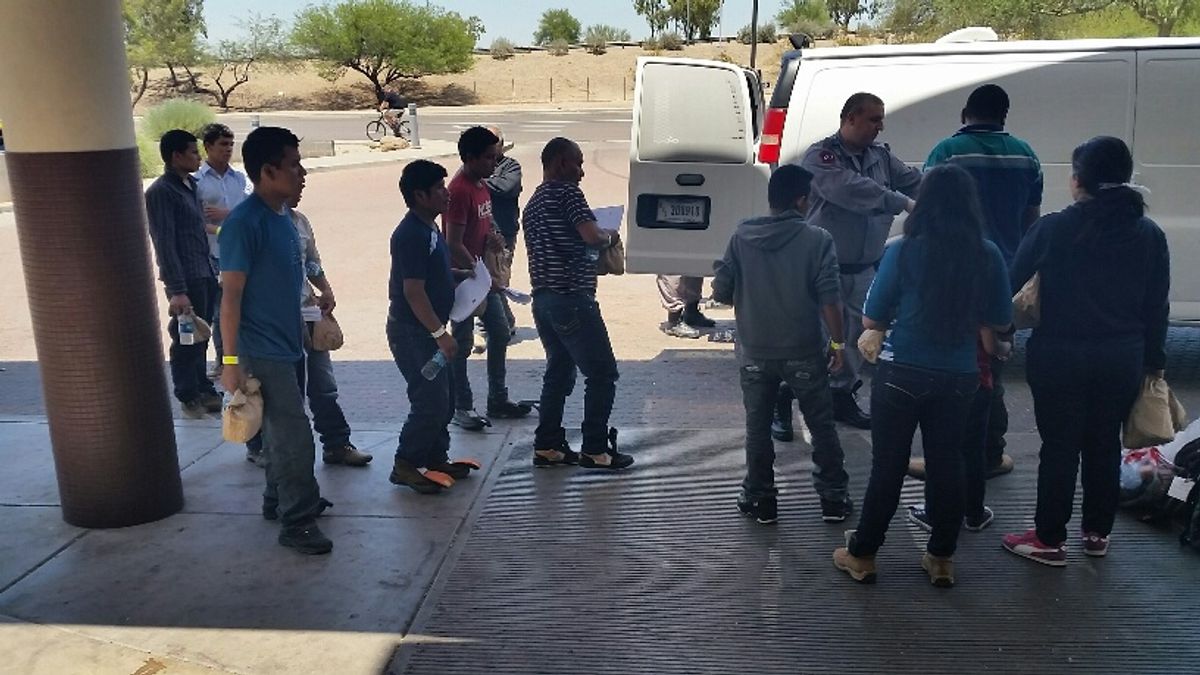 Claim:
The Department of Homeland Security is secretly moving and releasing crowds of undocumented people into the United States.
Rating:

The international border that separates the United States in Mexico seems to grow exponentially in the public's interest the closer the U.S. presidential elections loom.  While it is often difficult to find actual information, misinformation about the region abounds  — often calculated to shock, enrage, or annoy would-be voters, such as an article that showed up on JudicialWatch.org on 3 June 2016:

The Department of Homeland Security (DHS) is quietly transporting illegal immigrants from the Mexican border to Phoenix and releasing them without proper processing or issuing court appearance documents, Border Patrol sources tell Judicial Watch. The government classifies them as Other Than Mexican (OTM) and this week around 35 were transferred 116 miles north from Tucson to a Phoenix bus station where they went their separate way. Judicial Watch was present when one of the white vans carrying a group of OTMs arrived at the Phoenix Greyhound station on Buckeye Road. The OTMs are from Honduras, Colombia, El Salvador and Guatemala and Border Patrol officials say this week’s batch was in custody for a couple of days and ordered to call family members in the U.S. so they could purchase a bus ticket for their upcoming trip from Phoenix. Authorities didn’t bother checking the identity of the U.S. relatives or if they’re in the country legally, according to a Border Patrol official directly involved in the matter. American taxpayers pick up the fare for those who claim to have a “credible fear,” Border Patrol sources told JW. None of the OTMs were issued official court appearance documents, but were told to “promise” they’d show up for a hearing when notified, said federal agents with firsthand knowledge of the operation.

The article was quickly picked up by other sites despite its lack of vetted information or named sources.  It claimed that thanks to a lack of room in detention facilities, busloads of people in the U.S. illegally were getting put into buses and driven away to be released elsewhere in the country — and all on the taxpayer's dime:

Outraged Border Patrol agents and supervisors on the front lines say illegal immigrants are being released in droves because there’s no room to keep them in detention. “They’re telling us to put them on a bus and let them go,” said one law enforcement official in Arizona. “Just move those bodies across the country.” Officially, DHS denies this is occurring and in fact earlier this year U.S. Customs and Border Protection Commissioner R. Gil Kerlikowske blasted Border Patrol union officials for denouncing this dangerous catch-and-release policy.

The Department of Homeland Security is denying this because it isn't happening  — at least, not as described.  The article quoted above is conflating "illegal immigrants" with refugees and asylum seekers, who often show up on the southern border of the United States because that is the most accessible route from South and Central America, particularly from "Northern Triangle" countries (Guatemala, Honduras, and El Salvador) that are plagued by violence and political and economic instability.

Refugees and asylum seekers are subject to entirely different definitions and laws under the United States Citizenship and Immigration Services, and are considered a protected class:

(A) any person who is outside any country of such person's nationality or, in the case of a person having no nationality, is outside any country in which such person last habitually resided, and who is unable or unwilling to return to, and is unable or unwilling to avail himself or herself of the protection of, that country because of persecution or a well-founded fear of persecution on account of race, religion, nationality, membership in a particular social group, or political opinion, or

Many people show up asking entry into the U.S. on humanitarian visas, particularly women and children, the two most vulnerable groups in any unstable situation.  In 2014, the number of families applying for asylum or refugee status through the United States' southern border reached historic numbers, overwhelming shelters and detention centers while their applications were processed and creating uproars from one end of the country to the other.

When asylum-seekers appear at a border of the United States, they are transported to a detention center pending their interview with an immigration judge to see whether they are fleeing what's considered a credible threat. If they are denied, they're deported or can appeal, in which case they remain in immigration detention until their case can be heard again.  Increasing numbers of people requesting asylum or refugee status means immigration judges are overwhelmed — and that detention centers equipped to hold families are full to overflowing.  (The use of detention centers is controversial and strongly discouraged in international law.)

When minors are entering the United States without adult family members, the general policy is to release them to family members within the country pending their immigration hearings, or to keep them in the least restrictive environment possible if they must be detained.  When children and families are moved from site to site, they are often processed together and bused from one place to the next.  It's also true that minors from countries other than Mexico and Canada have a different classification than Mexican and Canadian nationals:

Children from Mexico and Canada can either choose to leave voluntarily or be sent home within 48 hours under repatriation agreements.  Children from all other countries must be transferred to HHS within 72 hours for court review of their immigration claims. The Office of Refugee Resettlement (ORR) in HHS reunites the child with family or a friend, or in approximately 10 percent of the cases, places them in foster care. After being placed, every child is put into deportation proceedings. The children may then be granted permission to stay (for example, through family visas, special immigrant juvenile visas or asylum) or be removed from the United States. (Court review is required, under a 2008 trafficking law, for children from countries other than Mexico and Canada.)

Sometimes, particularly when the bureaucratic controls over refugee status are overwhelmed, some people do slip through the cracks. However, they're never released en masse on unsuspecting suburban populations.

It's possible, even probable, that the unnamed sources in this Judicial Watch saw families being bused from one detention center to the next or sent to transportation hubs in order to join family members in the United States pending further immigration hearings.  This has been standard policy and practice for years in the U.S.  However, it's also possible — and maybe probable — that given there are no names, dates, or facts given in the article, that none of this happened as described at all, and that the article is little more than empty conjecture.

"Detention Guidelines: Guidelines on the Applicable Criteria and Standards relating to the Detention of Asylum-Seekers and Alternatives to Detention."     United Nations High Commissioner on Refugees (pp. 13-18)   2012.