Did a Fox 2 Detroit Report Expose Voter Fraud in the 2020 Election?

An image graphic detailing an assortment of potential election crimes was shared on social media the day after the 2020 presidential election. 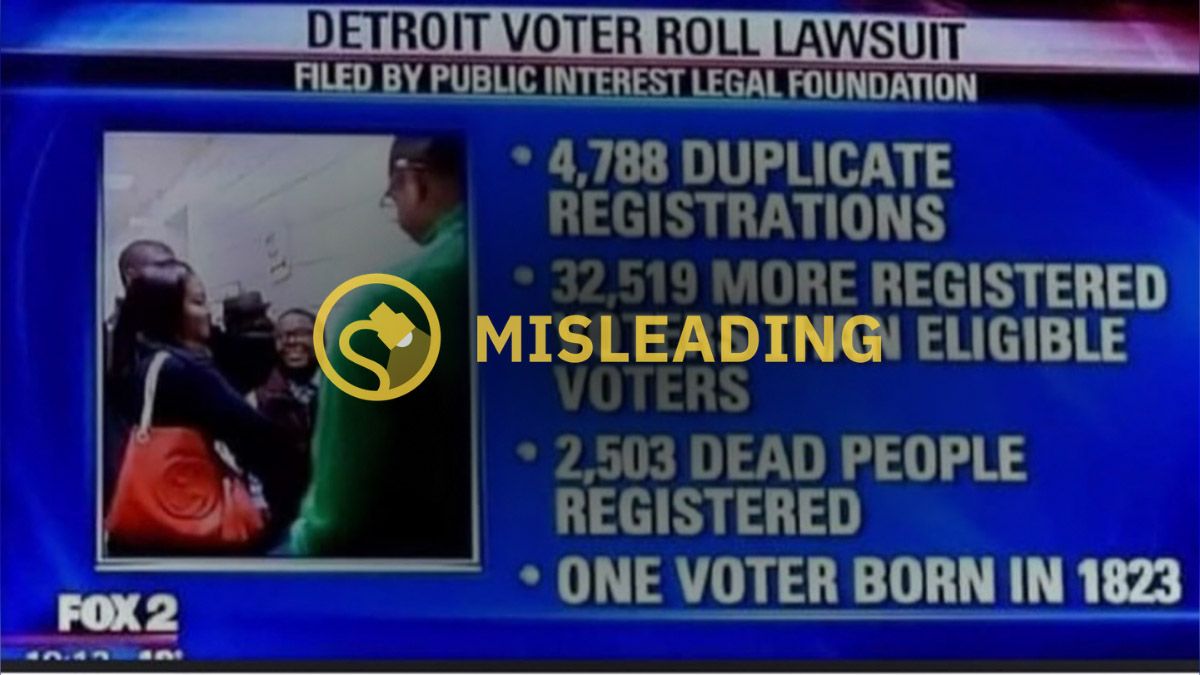 The 2020 U.S. presidential election pitting incumbent Republican President Donald Trump against Democratic nominee Joe Biden took place on Nov. 3, and was immediately tainted by accusations from the Trump campaign of rampant "voter fraud" on the part of the Democrats. Although no actual evidence of widespread voter fraud was presented, Trump and his supporters waged a propaganda war to discredit the results of the election, which, as of the second day of vote counting (Nov. 4), appeared to be trending toward a Biden victory.

As part of this effort, some Trump supporters shared an image graphic purportedly taken from a Fox 2 Detroit news report entitled "Detroit Voter Roll Lawsuit -- Filed by the Public Interest Legal Foundation." Bullet points on the graphic alleged the discovery of 4,788 duplicate voter registrations, 32,519 more registered voters than eligible voters, 2,503 dead people registered to vote, and "one voter born in 1823."

The timing of these posts conveyed the impression that Fox 2 Detroit had reported on voter fraud during, or connected to, the 2020 election. One Facebook user shared the image, posting: "Election fraud is real. President Trump is right." A tweet with several hundred engagements shared the image as well, and read: "Can you believe this?" The image was also shared in private Facebook Groups after Election Day.

The graphic, we found, as well as the report it came from, were real. However, the news segment aired not in November 2020, but in December 2019. The lawsuit referenced in the report was dropped by the plaintiff on July 1, 2020, after "remedial action" was taken by the city of Detroit. The Detroit News reported:

An advocacy group suing the city of Detroit for inaccurate voter rolls is dropping its lawsuit after the city made inroads into fixing the issues raised by the Indiana nonprofit.

"Defendants have taken action on the list of likely deceased registrants provided by the plaintiff," according to a Monday motion to dismiss the suit. "Further, almost all of the duplicate registrations that Plaintiff brought to defendants' attention have been corrected."

Winfrey said Wednesday Detroit's updated voter rolls were largely a result of regular maintenance, but her office did look into a few specific claims made in the lawsuit, including allegations that one registrant was born in 1823.

"We did do some extra digging because that is ridiculous and we wanted to see what was going on there," Winfrey said. "The conclusion was that that was a typographical error."

Regarding the "typographical error" about the lone voter that was purportedly "born in 1823," Michigan didn't become a state until 1837.

In a nutshell, we learned that the graphic listed some alleged voter registration issues in 2019, and had nothing to do with the 2020 election. We also learned same image had actually been shared throughout 2020 to drum up fears of voter fraud.

According to the Detroit News, the issues raised in the 2019 lawsuit were resolved to the satisfaction of the Public Interest Legal Foundation. But Christy Jenson, the executive director of the Michigan Democratic Party, told Fox 2 Detroit: "This lawsuit is about making a clickbait headline to make voters have less confidence in what is happening in their communities, their clerk's office. And it is really a direct attack on people of color."

Regarding the claim that absentee ballots for deceased individuals might be misused by family members who receive them in the mail, the Detroit News reported: "The Secretary of State's office also has maintained the mailings will not lead to voter fraud since signature verification is required on both the ballot application and actual ballot."

The Public Interest Legal Foundation is a conservative legal group with myriad ties to both the Trump Administration and right-wing media, but a questionable commitment to accuracy. In a previous article, Snopes detailed the results of our exhaustive investigation into methods used by the group to "generate, create, organize and weaponize" misleading narratives.