Are Detained Immigrant Children Required to Recite the Pledge of Allegiance?

Critics say the requirement forces migrant children to pledge allegiance to a country that separated them from their families. 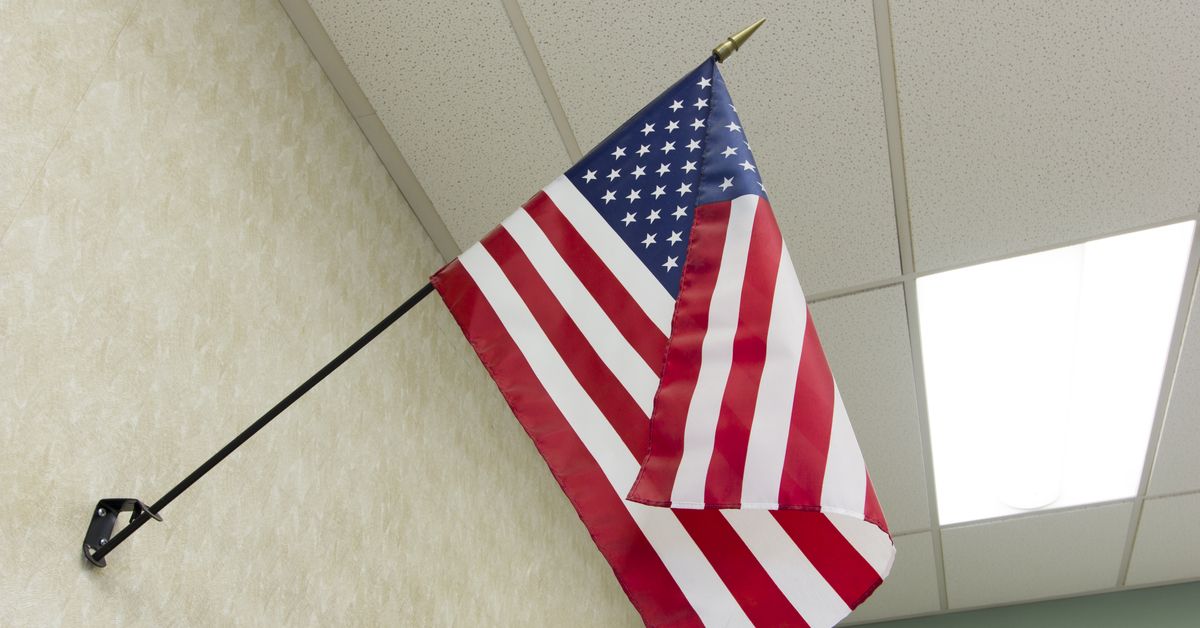 Claim:
Immigrant children separated from their parents and held in detention centers around the country are required in some cases to recite the Pledge of Allegiance daily.
Rating:

In June 2018, President Trump signed an executive order reversing his administration's controversial "family separation" immigration policy, which meant that, going forward, undocumented migrant children would no longer be taken from their parents at the border.

However, at least 2,000 children already separated from their families remained in U.S. custody, dispersed by the Department of Homeland Security to privately operated detention centers around the country. Relatively little was known about the living conditions inside those facilities apart from what was reported by journalists who went on guided tours of some of the locations and published handout photographs provided by the government.

In late June, reports began appearing on social media to the effect that the children detained in at least one of the facilities were being forced to recite the Pledge of Allegiance every day:

Children are being forced to recite the Pledge of Allegiance to a country that separated them from their parents https://t.co/ajBHXukSyW via @businessinsider

(Please note that the Getty Images photograph by Win McNamee embedded in some tweets was not taken at a detention center; rather, it shows a child participating in a children's naturalization ceremony in Washington, D.C., on 31 May 2018.)

Some critics pointed out that a similar routine was imposed on Japanese-American children interned by the United States government during World War II. Although the children weren't separated from their families in that instance, they were required to swear fealty to the same government that had incarcerated them for the duration of the war:

Two photos of children being forced to recite the Pledge of Allegiance:
a 1942 photo (Dorothea Lange) of Japanese-American children in SF before their internment, and a 2018 photo (Win McNamee) of incarcerated immigrant children in the #CasaPadre Walmart detention center. pic.twitter.com/Cwg7Ml3ML6

Other commenters drew a more extreme comparison between detained migrant children and Jewish children being forced to display a "Sieg Heil" salute to German soldiers in Nazi-occupied Poland:

Migrant children are being required to recite the pledge of allegiance in detention centers "out of respect" for the United States.

The completely unrelated photo below is of Jewish children being forced to give the Nazi salute to German soldiers. pic.twitter.com/y4908yfrMD
— Kel (@KelinWonder) June 25, 2018

Many of these posts linked to online sources such as Business Insider, Common Dreams, and The Week, but all of those publications, in turn, credited the Washington Post as the original source of the report on children being forced to recite the Pledge at a detention center.

That report, published on 24 June 2018, described living conditions at several such centers, including Casa Padre, a facility operated by Southwest Key Programs in Brownsville, Texas:

The children have been through hell. They are babies who were carried across rivers and toddlers who rode for hours in trucks and buses and older kids who were told that a better place was just beyond the horizon.

And now they live and wait in unfamiliar places: big American suburban houses where no one speaks their language; a locked shelter on a dusty road where they spend little time outside; a converted Walmart where each morning they are required to stand and recite the Pledge of Allegiance, in English, to the country that holds them apart from their parents.

Why must they say those words, some of the children ask at the shelter in Brownsville, on the Mexican border in Texas?

“We tell them, ‘It’s out of respect,’ ” said one employee of the facility, known as Casa Padre, who spoke on the condition of anonymity for fear of losing their job.

Washington Post senior editor Marc Fisher, whose byline was one of three that appeared on the article, told us the report was based on firsthand accounts obtained by the Post's Mexico correspondent, Kevin Sieff, "from people who were in the room at Casa Padre."

Although it's the only such report we've encountered to date regarding the Brownsville facility, we also found one describing a similar activity in child detention centers in New York state. This is from a story published on 19 June 2018 on the web site of WNYC radio:

WNYC confirmed that at least three agencies in New York are currently caring for immigrant children recently separated from their parents: Abbott House in Westchester, Rising Ground in Westchester and MercyFirst on Long Island.

These nonprofits are established agencies that are inspected by the state. Children may attend school, learn a little English, and practice reciting the Pledge of Allegiance.

We know, based on reporting by two mainstream news agencies, then, that reciting the Pledge of Allegiance in English is a routine activity for at least some of the migrant children residing without their parents in detention facilities — in some instances as a daily requirement, and in others, apparently, with some degree of choice.

Chan, Tara Francis.   "Children Are Being Forced to Recite the Pledge of Allegiance to a County that Separated Them from Their Parents."     Business Insider.   25 June 2018.

Conley, Julia.   "Detained Children Forced to Recite Pledge of Allegiance 'Out of Respect' for Country that Tore Them Away from Parents."    Common Dreams.   25 June 2018.

Weber, Peter.   "Migrant Children Are Required to Recite the Pledge of Allegiance in Detention Centers, 'Out of Respect' for America."     The Week.   25 June 2018.