A photograph of President Obama with his feet on his Oval Office desk is genuine, but the act it captures is neither "desecration" nor unprecedented. 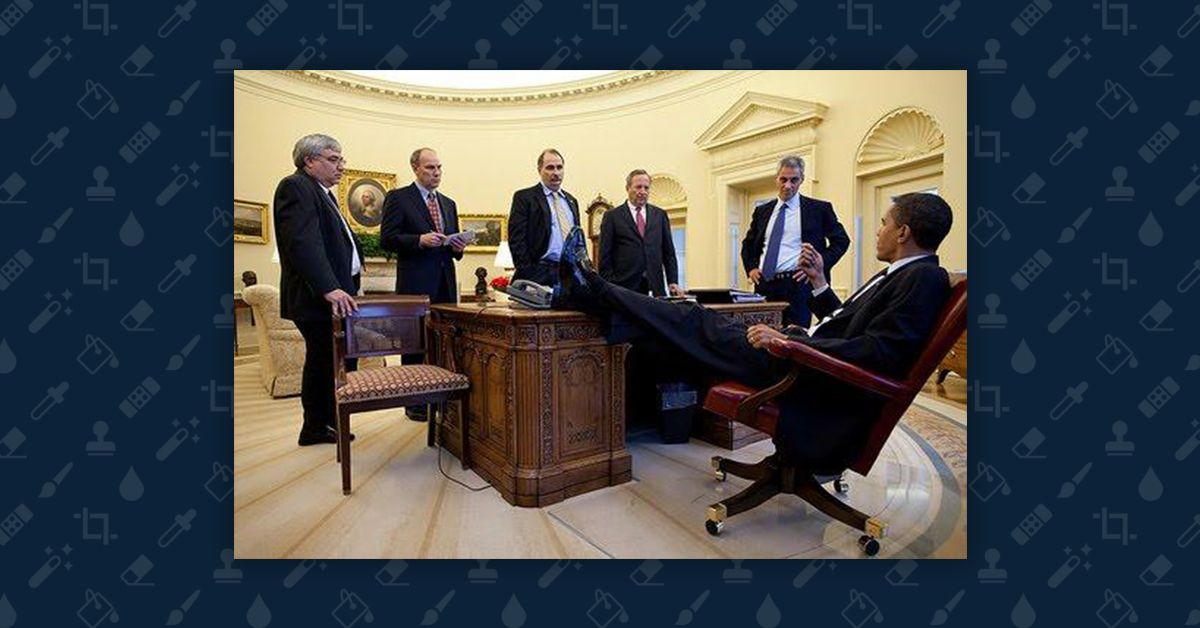 A photograph captures President Barack Obama with his feet on his Oval Office desk.

The photograph does not capture a scene of "desecration" nor an act unique to President Obama,

The above-displayed image is a genuine photograph of President Obama conversing with some of his staff in the Oval Office with his feet up on his desk. However, most of the accompanying text that was reproduced with this image was contrived and subjective invective intended to stir up partisan outrage:

It is true that in some parts of the world showing the bottom of one's shoes (even accidentally) is considered rude, but it isn't true of American culture, nor do the areas where it does hold true (primarily the Middle East, Korea, Thailand, some parts of Africa) comprise anything close to "over half of the cultures of the world."

This posture is not the norm, perhaps, but it's far from "absolutely never done." Take, for example, this anecdote from a book about one of American's most prominent business executives, Apple's late co-founder and CEO Steve Jobs:

Bill Curley, a middle-aged Apple marketing manager, remembers this incident from his very first week on the job at Apple. "I was at a meeting with [Apple CEO Steve] Jobs and several other managers, and he is in shorts, running shoes, and no socks. He's disagreeing with a guy, so he kicks off his shoes and puts his bare feet on the table. He framed the guy's face with his feet."

An executive's kicking his feet up on a desk or table is an action that can be regarded quite differently in varying contexts: Doing so in the middle of a staff meeting might be regarded as demonstrating rudeness, arrogance, or disrespect; on the other hand, doing so at the end of a long, hard workday while engaging in friendly chit-chat with a few subordinates might be perceived as showing oneself to be a warm, folksy, regular ol' guy.

If a U.S. President's putting his feet up on the Oval Office desk is an indication that "he thinks of himself as a king" and should be "inundated" with mail "demanding he stop desecrating his office," then we seem to have missed the boat on that issue — identical actions by President Obama's predecessors in the White House provoked no such outrage, as demonstrated by the following unremarked-upon photographs of Presidents George W. Bush and Gerald Ford: This photograph became the subject of renewed interest after President Trump adviser Kellyanne Conway was photographed kneeling with her feet on an Oval Office couch.