A doctored video clip appeared at first glance to show the Florida governor arguing with Sean Hannity and Lara Trump about the propriety of the FBI's raid on Donald Trump's residence. 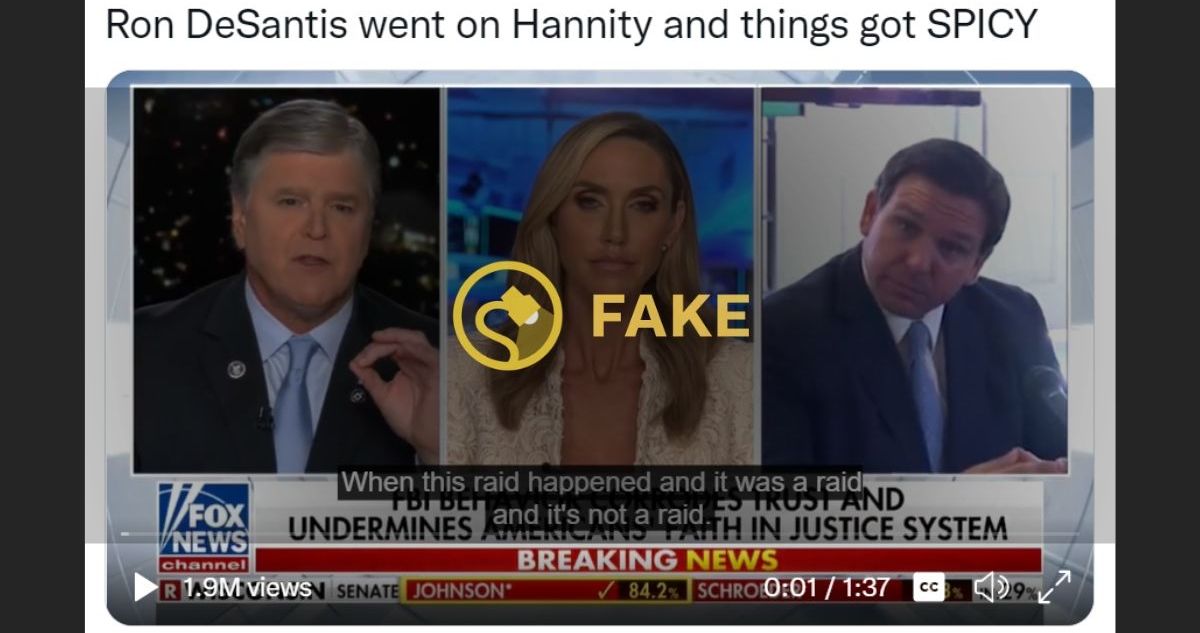 On Aug. 12, 2022, four days after the FBI conducted a search of former U.S. President Donald Trump's residence at his Mar-a-Lago resort in Florida for classified documents, a video clip went viral on Twitter that appeared to show Florida Gov. Ron DeSantis, a Republican, defending the FBI's actions. However, the clip had been digitally manipulated to create the false impression that DeSantis expressed approval of the execution of the search warrant. He did not.

The video clip, as originally shared on Twitter by its creator, Timothy Burke, ostensibly documented a segment of Fox News' "Hannity" show on which both DeSantis and Lara Trump were guests:

If you watch the video with a careful eye, however, it's easy to detect that it was pieced together from separate, unrelated clips of DeSantis, Trump, and Hannity to create the impression that the three debated one another on Hannity's show. But the DeSantis clip, which dates from 2020, has nothing to do with the Mar-a-Lago raid. Rather, it shows DeSantis speaking to a WPTV reporter about a law enforcement raid at the home of Rebekah Jones, a former Florida Department of Health data scientist.

In point of fact, DeSantis is on record condemning the FBI raid on Mar-a-Lago, calling it "another escalation in the weaponization of federal agencies against the Regime’s political opponents":

Uncharacteristically, Sean Hannity rushed to demand that Twitter delete the fake video. "This never happened!!" Hannity tweeted. "Twitter needs to step in and remove this immediately!!"

As of this writing, the video has not been removed.