Does Derek Chauvin Have a 'Three Percenters' Symbol on His Hand?

A blurry image of the former police officer taken as he was led away in handcuffs sparked speculation. 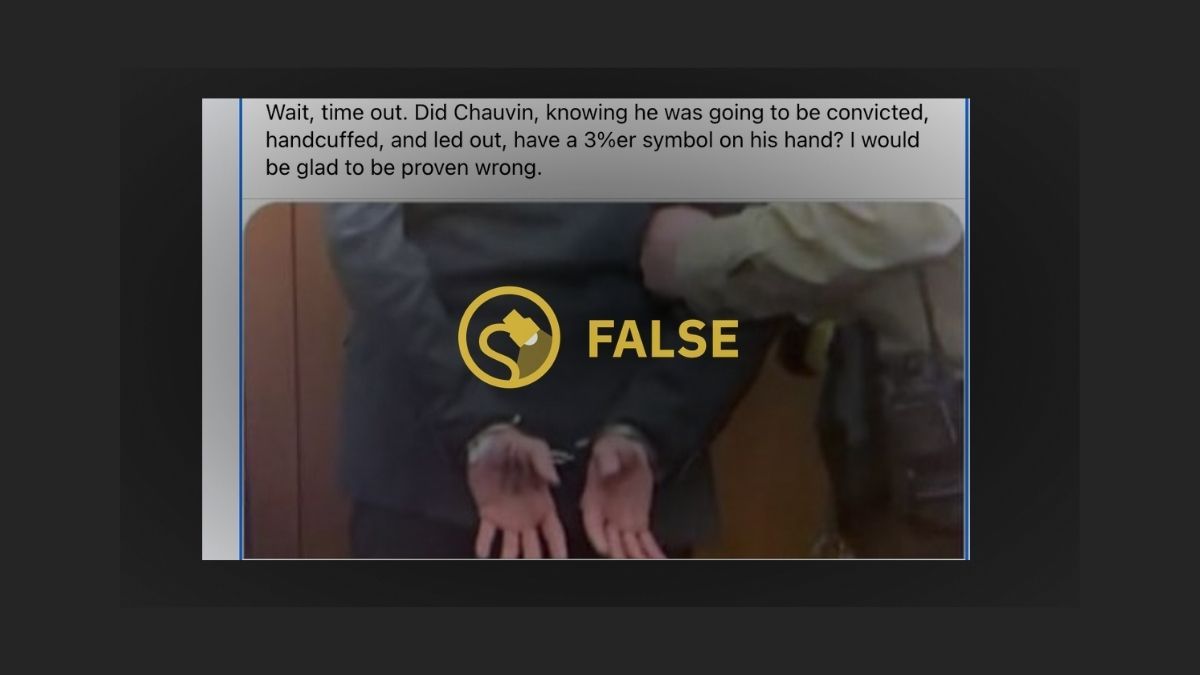 Claim:
A symbol for the extremist group Three Percenters could be seen on Derek Chauvin's left palm after he was convicted of murder in the killing of George Floyd.
Rating:

On April 20, 2021, some on social media shared a rumor that former Minneapolis police officer Derek Chauvin, who was convicted that day of murder and manslaughter charges in the killing of George Floyd, had a symbol on his left hand representing the extremist group Three Percenters. Here is one example post on Facebook, with the user's name cropped out for privacy:

We can't see what's on Chauvin's hand because the image is too blurry when blown up. But it appears to be two lines, and what some were interpreting as a third line actually appears to be a shadow, near his thumb. That said, some saw what they believed to be three parallel markings on his left palm, which, if true, could resemble the symbol for the Three Percenters, a right-wing extremist militia group.

Perhaps viewers had cause to suspect that after reports in 2020 that a St. Paul police officer decorated his personal vehicle with a Three Percenters sticker:

However, Chauvin's attorney, Eric Nelson, told TMZ otherwise. Chauvin had reportedly written Nelson's phone number on his hand before the verdict came down in case he was taken into custody — which he was.

Chauvin's lawyer, Eric Nelson, tells TMZ, his client wrote the number ahead of the conviction, because the convicted former cop knew if the jury found him guilty of second-degree murder he'd almost certainly have his bail revoked and he'd be remanded to custody.

Chauvin clearly knew given his former profession, he would have limited access to a phone but would be allowed to call his lawyer ... thus the scribble on his left hand. Chauvin has been in court many times, so he clearly knew a conviction would lead to swift incarceration, with no opportunity to speak to his lawyer in court after the verdict.

There is no evidence Chauvin is affiliated with the Three Percenters group. We have previously reported extensively on his background.

According to the Anti-Defamation League (ADL), which tracks and researches extremism, the Three Percenters is an anti-government militia movement that, perhaps counterintuitively, has appeared at rallies of former U.S. President Donald Trump "to provide armed 'security' against anti-Trump protesters." According to ADL, the Three Percenter concept, created in 2008, is based on an inaccurate historical claim that only 3 percent of Americans fought in the Revolutionary War against the British.