Can a Dentist Tell If You've Given Head? 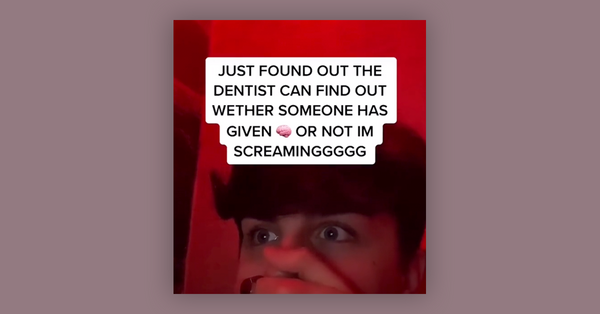 A TikTok video published by user "thyrants" opens with the assertion that "the dentist can find out whether someone has given [head] or not." It concludes with what appears to be a person, perhaps a medical professional, in a dental chair discussing the reality of "fellatio-associated erythema of the soft palate." A scientific paper on the topic is used as a backdrop. "Sometimes we can tell," the seated man says. "It's usually bruising on the soft palate called petechiae, but unless the patient's really young or we see signs of abuse, we don't care."

In 1928, the first report of fellatio-induced mouth lesions was published in the French Journal of Venereal Diseases. According to a 2017 paper revisiting the work, the paper was notable not only for that first, but also for the enthusiasm in which the corresponding doctor described the case, which involved a sex worker with what he determined to be a particularly strong work ethic. As described in that 2017 paper and translated from French, the doctor described this patient as a “conscientious partner” who "had attached herself to work like an octopus to its prey."

The TikTok video highlights a case report from 2018 that describes a 47-year-old-man with a lesion discovered during a dental exam:

While examining the oral cavity we found a circular-shaped erythematous lesion with a clear centre on the patient’s soft palate. The patient was asymptomatic and unaware of the lesion. ... The patient acknowledged ... being sexually active with men. His sexual activity included the practice of oral sex, with the last instance being 3 days prior to this visit. ... With this information, we concluded that the erythema on the soft palate was associated with the practice of oral sex.

Indeed, several case reports like these can be found in the scientific record. According to a 2013 report that summarized the literature on fellatio-associated oral lesions, there is likely more than one mechanism of injury from the sex act. "Direct and forceful contact of the distal penis against the palate may result in mucosal injury with rupture of submucosal vessels and hemorrhage," the authors reported in that paper. Another potential cause, as described in the 2018 paper, is the "the negative pressure created while sucking," which could also damage tissue in the mouth.

The observation of petechiae in the mouth could be the result of several non-fellatio related causes, as well. This is another reason why it is largely inaccurate to suggest dentists can tell if you have recently performed oral sex. More accurately, fellatio-related injuries could be diagnosed by a dentist when clinical observations are combined with their patients' stated medical and sexual history. "Because the fellatrix or fellator may be unaware of the etiology of the lesions or may be reluctant to provide these details of the sexual history," the 2013 case report argued, "the clinician needs to have a high index of suspicion based on the patient's clinical presentation and collaborating history of preceding fellatio."