Did Democrats Omit 'Under God' from the Pledge of Allegiance?

The phrase "under God" is still regularly recited by members of the Democratic party. 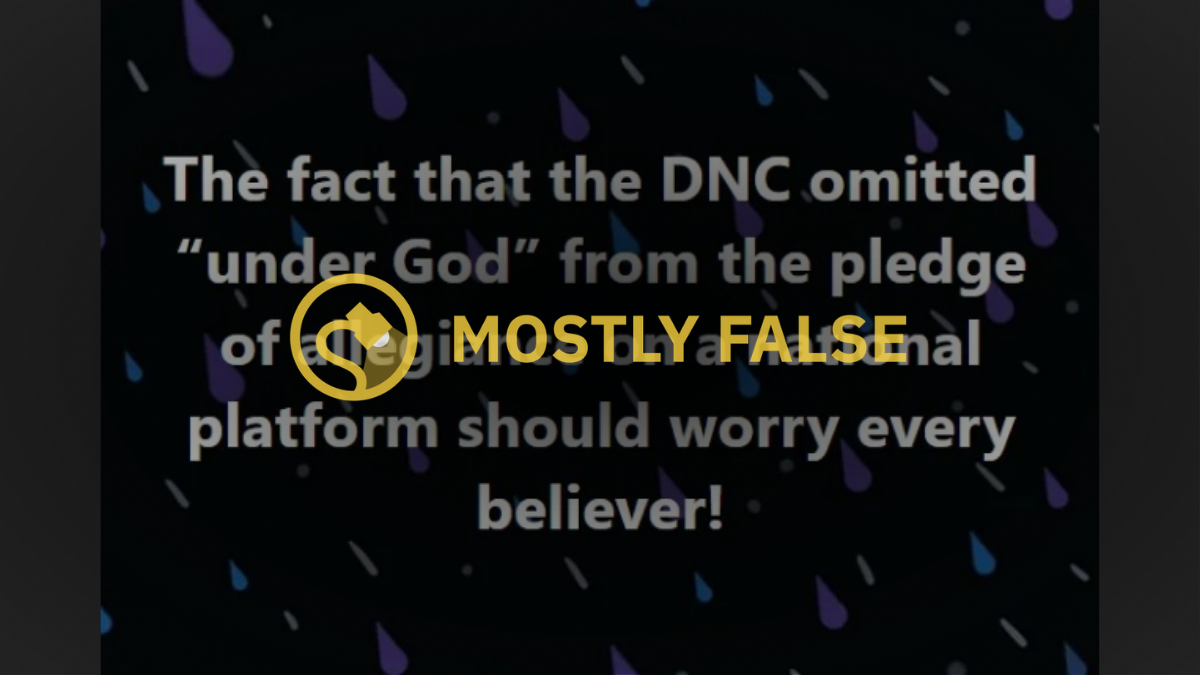 Claim:
The Democratic National Convention omitted the phrase "under God" from the Pledge of Allegiance in 2020.
Rating:

The phrase "under God" was omitted from at least two recitations of the Pledge of Allegiance at individual caucus meetings during the DNC in 2020.

The DNC did not issue any guidelines forbidding the use of the phrase. On the national stage, the phrase "under God" was used during the recitation of the Pledge of Allegiance at the start of each night of the 2020 DNC.

A rumor circulated on social media during the Democratic National Convention (DNC) in August 2020 alleging that the DNC had omitted the phrase "under God" from the Pledge of Allegiance. The following text (also shown in the above-displayed meme), for instance, was copied and pasted to multiple accounts on Facebook:

The fact that the DNC omitted “under God” from the pledge of allegiance on a national platform should worry every believer!

This statement is misleading at best. The DNC did not omit "under God" from the pledge, nor did they forbid its use. In fact, during every recitation of the pledge before each night's events — the 2020 DNC lasted four nights — the phrase "under God" was included.

Here, for example, is a video of Cedric Richmond Jr., the son of Rep. Cedric Richmond, D-La., reciting the pledge (and saying "under God") during the final night of the DNC.

Here are links to videos of "under God" being said during the pledge on nights one,  two, and three.

Political conventions are sprawling events. In addition to the "main events" that take place during the nationally televised program each night, individual caucuses and councils also meet throughout the week.

On Aug. 17, for instance, the first day of the DNC, the Hispanic Caucus, the Labor Council, the AAPI Caucus, the Black Caucus, the Interfaith Council, the Ethnic Council, the Youth Council, and the Women's Caucus all held meetings prior to the night's nationally televised program. In at least two of these meetings of smaller individual caucuses — the LGBTQ caucus meeting and the Muslim Delegates Assembly on Aug. 18 — the phrase "under God" was omitted from the pledge.

David Brody of the Christian Broadcasting Network brought attention to both of these instances on Twitter. Here's one of the videos posted by Brody: