Have Prominent Democrats Concealed Their 'Real' Names from the Public?

The American public deserves something better than ridiculously false memes. 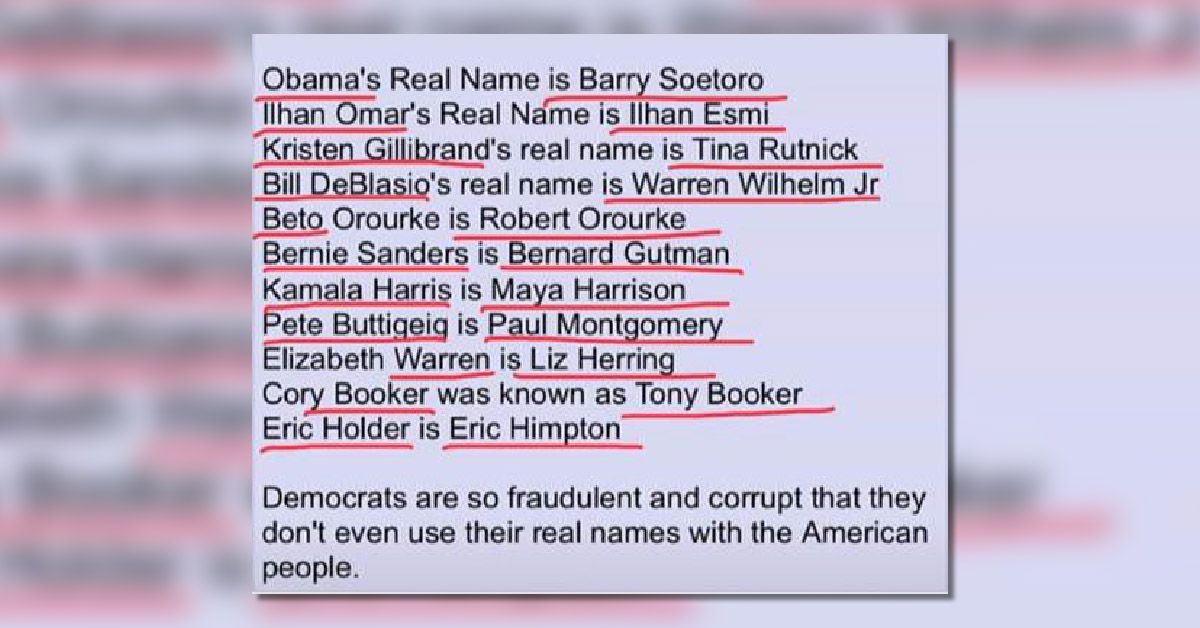 Claim:
A list offers several examples of Democratic politicians who have concealed their 'real names' from the public.
Rating:

Mid-2019 saw the social media emergence of a list of prominent Democratic politicians who were supposedly "fraudulent" and "corrupt," as exemplified by their concealing their "real" names from the American public: The list was so ridiculously over-the-top (primarily a collection of common nicknames, middle names, and women's maiden names) as to appear to be an attempt at humor, but many readers took it at face value and inquired about its truthfulness. So below we cover the "real" scoop on these politicians' actual names:

1) The "real" name of former president Barack Obama, as documented by his birth certificate, is Barack Obama (in full, Barack Hussein Obama II).

"Barry" was simply a childhood nickname for "Barack," and Soetoro is the surname of the Indonesian man (Lolo Soetoro) whom Barack's mother, Ann Dunham, married after divorcing Barack's biological father. (No evidence exists that Barack's surname was ever legally changed to Soetoro.)

2) The "real" name of U.S. Rep. Ilhan Omar of Minnesota is Ilhan Omar (in full Ilhan Abdullahi Omar). She was born in Somalia to Nur Omar Mohamed and Fadhuma Abukar Haji Hussein and arrived in the U.S. as a refugee when she was 9 years old.

3) The "real" name of U.S. Sen. Kirsten Gillibrand of New York is Kirsten Gillibrand. Her birth name was Kirsten Elizabeth Rutnik (not "Rutnick"), and "Tina" was a childhood nickname (supposedly adopted because her brother was unable to pronounce Kirsten), while Gillibrand is the surname of the man (Jonathan Gillibrand) whom she married in 2001.

"Bill" was his childhood nickname, and after his parents divorced, he legally changed his name to Warren de Blasio-Wilhelm in 1983, and then to Bill de Blasio in 2001.

6) The "real" name of U.S. Sen. Bernie Sanders of Vermont is Bernard Sanders, with "Bernie" being the familiar form of his first name. His parents were Elias Ben Yehuda Sanders and Dorothy Glassberg, and the false notion that his "real" surname is actually Gutman apparently stems from a ship's passenger list recording the arrival of his father in New York as a Polish immigrant in 1921 under the name Eliasz Gitman (born to a woman whose married name was Gutman).

Elias legally changed his surname to Sanders upon achieving naturalized U.S. citizenship status in 1927, and Sanders was the surname listed for Elias on his 1934 marriage certificate to Dorothy Glassberg, so his famous son's "real" surname is indeed Sanders.

7) The "real" name of U.S. Sen. Kamala Harris of California is Kamala Harris (in full Kamala Devi Harris). She was born in Oakland to Donald Harris (not "Harrison") and Shyamala Gopalan, and "Maya" is the name of her younger sister.

8) The "real" name of South Bend, Indiana, Mayor Pete Buttigieg (not "Buttigeig") is Peter Buttigieg (in full, Peter Paul Montgomery Buttigieg). The child of Joseph Buttigieg and Jennifer Anne Montgomery, Pete's middle names are Paul and Montgomery — neither of those names is his "real" first name or surname.

9) The "real" name of U.S. Sen. Elizabeth Warren of Massachusetts is Elizabeth Warren. She was born Elizabeth Ann Herring to Donald Herring and Pauline Reed, and Warren is the surname of the man (Jim Warren) whom she married in 1968.

The future senator divorced her first husband and was remarried to a man named Bruce H. Mann two years later, but she retained her first husband's surname (Warren) in the process. "Liz" is, of course, simply a common shortening of the name "Elizabeth."

10) The "real" name of U.S. Sen. Cory Booker of New Jersey is Cory Booker (in full, Cory Anthony Booker). His parents were Cary Alfred Booker and Carolyn Rose Jordan, and "Tony" is merely a common shortening of his middle name.

If we were to play this game of pretending that the use of common nicknames, middle names, and maiden names was indicative of fraud and corruption, then we could easily find several prominent Republican politicians who would similarly have to be categorized as "corrupt frauds":