Did a State Democratic Party Logo Once Feature the Slogan 'White Supremacy'?

Until 1966, the official logo of the Alabama Democratic Party featured a crowing rooster and a banner reading "White Supremacy." 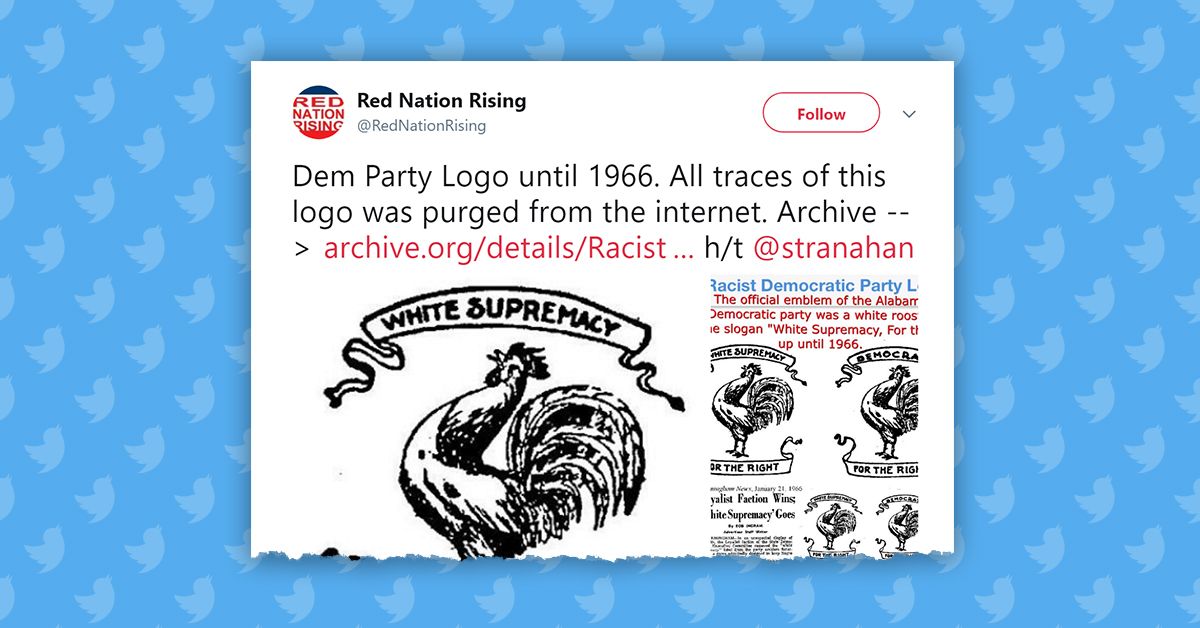 Claim:
The official logo of the Alabama Democratic Party, adopted in 1904 and not replaced until 1966, featured an illustration of a crowing rooster and the slogan "White Supremacy, For the Right."
Rating:

Amid political controversy engendered by the protests of National Football League athletes who refused to stand during pre-game renditions of the national anthem in late September 2017 to display solidarity with black victims of police violence — a gesture supported by many Democrats but condemned by President Trump and conservative Republicans — a meme was circulated via social media making the point that the Democratic Party was not always a standard bearer for racial equality.

The centerpiece of the post is a reproduction of an illustration typically captioned "Democratic Party Logo until 1966," featuring a drawing of a crowing rooster and the slogan "White Supremacy, For the Right." And although the description is somewhat misleading ("White Supremacy" was never a slogan of the national Democratic Party, for example, nor have we seen evidence that the image was "purged from the Internet"), this was, in fact, the emblem of the Alabama Democratic Party between 1904 and 1966.

First, regarding the rooster, it's often mistakenly assumed that the donkey was always the symbol of the Democratic Party, when in fact the party began using a crowing rooster as its mascot around 1840. This version of how that came to pass is from a biographical sketch of Indianapolis lawyer and Whig politician Thomas D. Walpole published in 1876:

In 1840 [Tom Walpole] was an ardent and enthusiastic Whig, and rendered great service to the Whig party, and contributed largely to the success of General Harrison. It was during this canvass that Tom gave to the Democratic party their emblem, which they have claimed ever since, the chicken cock, or rooster. George Patterson, then editing the Democratic paper, wrote, just before the August election of that year, to Joseph Chapman, of Greenfield, that the Democratic party would be beat, and that there was no hope, but, said he, "Crow, Chapman, crow." By some means Tom got possession of the letter, and exposed it. A year or two subsequent to this circumstance Messrs. George and Page Chapman became proprietors and editors of the Democratic paper and placed a rooster at the head of their paper, and from this circumstance it was generally supposed that they were the persons to whom the letter was addressed and the original crowers; but such is not the case. It is to Tom Walpole the Democratic party is indebted for the emblem of the rooster.

Other sources grant full credit to Joseph Chapman for dreaming up the rooster symbol, but in any case, although it was never officially adopted as the emblem of the national Democratic Party, it very quickly became an unofficial one and remained so until cartoonist Thomas Nast's depictions of Republicans as elephants and Democrats as donkeys captured the public imagination in the late nineteenth century (to date, the national Democratic Party has never officially adopted any animal as its symbol).

The forerunner of today's Democratic Party was born during the 1820s and '30s, coalescing around the populist presidential candidacy of national war hero and southern slaveholder Andrew Jackson. Although egalitarianism and freedom of the individual were much-touted ideals of "Jacksonian Democracy," in reality the Democratic Party of the time took white supremacy for granted and had little to no interest in defending the freedom and equality of African Americans, native Americans, or any other racial minorities. Still, the party was conflicted over the expansion of slavery and split in two during the 1860 elections, with the Northern Democrats opposing expansion and Southern Democrats favoring it. The Democratic Party remained dominant in the South after the Civil War, opposing Reconstruction and enacting laws to suppress black voters and enforce racial segregation.

The Alabama Democratic Party went further than most, calling for the adoption of a new state constitution in 1901 that explicitly disenfranchised black voters, and celebrating its success in that effort by officially embracing the slogan "White Supremacy" three years later. The Monroe Journal of Claiborne, Alabama reported on 2 June 1904:

The state executive committee adopted the game cock as the Democratic Party emblem. Above the bird will be the words "White Supremacy" and below "For the Right."

To be sure, there were a few Alabama Democrats who objected to the emblem after its adoption, though not for the reasons you might suppose. For example, Democratic Congressman J. Thomas Heflin was perfectly fine with the racist slogan, but felt the image of the rooster was undignified:

I think that the emblem is not what it should be, and that it fails to impress the people with the dignity of the Democratic Party. To my mind it would have been much better to have had, instead of the rooster, the picture of a handsome young woman, holding the Constitution in a scroll aloft, with the words "Here We Rest" prominently shown upon it. I see no objection to the use of the two expressions already adopted, but do not think that the design is worth of a great party like ours.

Dignified or not, that emblem would appear at the top of every Alabama state ballot for many decades to come, as noted, for example, in this November 1940 report by the Chicago Tribune:

In Alabama the disfranchisement of the Negro is proclaimed proudly by the Democratic party on the official ballot in all elections.

At the head of the Democratic column on the ballot appears the emblem of the rooster. Arched over the rooster's head are the words: "White Supremacy." Below the rooster appear the words: "For the Right."

By the early 1950s, however, the Alabama Democratic Party's proud embrace of white supremacy was becoming a liability for the national party. In 1952, New York Gov. Thomas Dewey, a Republican campaigning on behalf of Dwight D. Eisenhower, gave a speech laying the racist logo at the doorstep of Eisenhower's Democratic rival Adlai Stevenson (from the Dixon Evening Telegraph, 9 October 1952):

A rooster emblem, with the words "White Supremacy" above it and the words "For the Right" below it.

"There it is," Dewey said, "the rooster and the banner of White supremacy — Ku Klux Klan — Jim Crow banner — flying over the election for Stevenson and Sparkman in this ear 1952."

Though the Democrats lost that election, the emblem would remain intact on the ballot for another 14 years, until leaders of the Alabama Democratic Party finally modified the slogan in 1966 for purely pragmatic reasons: The party needed "Negro" voters. The Montgomery Advertiser reported:

In an unexpected display of strength, the Loyalist faction of the State Democratic Executive Committee removed the "white supremacy" label from the party emblem Saturday in a move admittedly designed to keep Negro voters in the fold.

The only change made in the emblem was removing the words "white supremacy" and substituting "Democrats." The rooster was untouched.

Charles W. McKay of Talladega offered the resolution changing the emblem. McKay gained fame a number of years ago when he authored the "Nullification Resolution" in the Legislature which sought to declare null and void the Supreme Court's school desegregation decision.

McKay made it clear that the emblem change was necessary if the Democrats were to attract Negro votes this year.

"We can't afford to spend a lot of money nominating candidates this spring and then take a stick and run off 150,000 to 175,000 voters who might vote Democratic," he declared.

Ironically (though the irony may well have been lost on McKay), it was only because the voter suppression measures instituted decades earlier by his own state party had been knocked down by the Voting Rights Act of 1965 that many of those potential new black voters would even have access to the polls.

As to the Alabama Democratic Party rooster, it, too, was finally sent into forced retirement, but not till 1996 (30 years later), when it was replaced with the image of a donkey.