Are These the Defense Ministers of Norway, Sweden, Netherlands, Germany and Russia?

A photograph showing four female defense ministers from Norway, Sweden, Netherlands and Germany and their male counterpart from Russia is real but outdated. 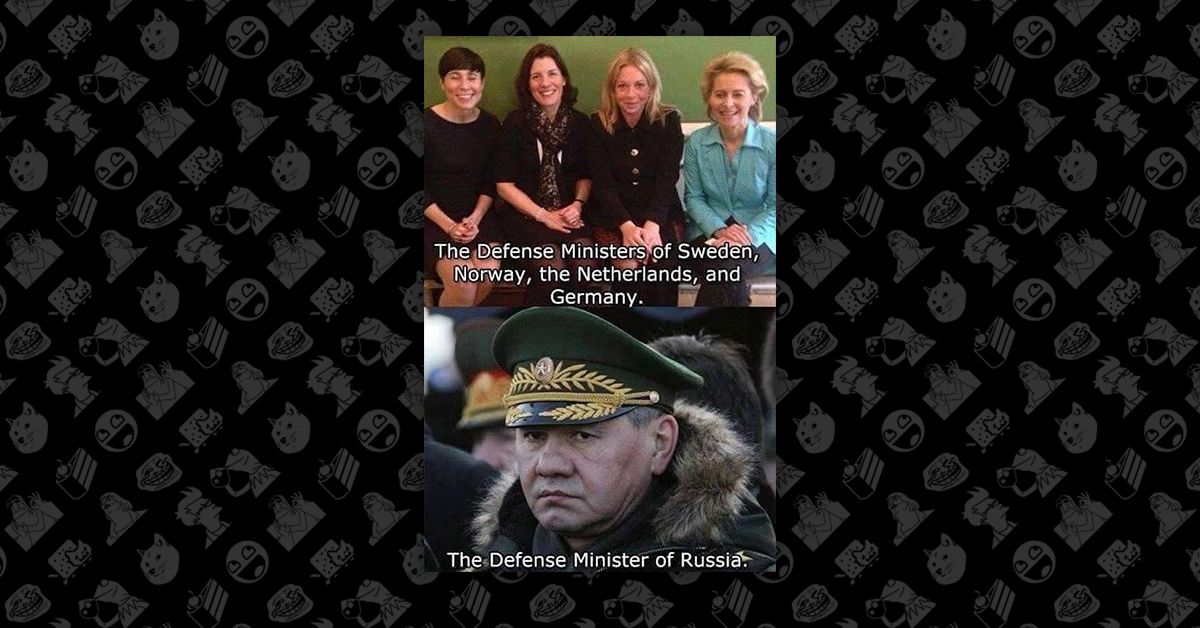 A set of images purportedly comparing the female Defense Ministers of Norway, Sweden, Netherlands, and Germany with the male Defense Minister of Russia is frequently circulated online along with disparaging and sexist remarks implying that women are somehow less capable of holding this government/military position than men are: Both the logic behind this argument and the images themselves are outdated.

The photograph was originally posted on Twitter by Hennis-Plasschaert:

The story behind the taking of the photograph was chronicled by The Guardian:

It happened at around 3pm on Saturday, in one of the conference rooms at Munich's Bayerischer Hof hotel, where politicians from around the world had gathered for an annual security conference. The female defence ministers of Norway, Sweden and the Netherlands had all met at previous conferences, so they decided to welcome Ursula von der Leyen, their new German counterpart.

When Belgium's (male) defence minister, Pieter De Crem, spotted the group of women, he quipped: "Oh, I'll better get out of the picture." That's when the Dutch defence minister, Jeanine Hennis-Plasschaert, asked someone to capture the scene on her phone.

Hennis-Plasschaert told the Guardian: "[The Dutch politician] Neelie Kroes once said to me that old boys' networks are the oldest form of cartels we have in Europe. She was right, but things are changing, and women can do similar things now."

Although Ine Eriksen Søreide (Norway), Karin Enström (Sweden), Jeanine Hennis-Plasschaert (Netherlands) and Ursula von der Leyen (Germany) were all the Ministers of Defense of their respective countries in 2014, that is no longer the case.

As of this writing, only Ursula von der Leyen still holds such a position. The Netherlands still has a female minister of defense (Ank Bijleveld), but men have since been appointed to those positions in Sweden and Norway (Peter Hultqvist and Frank Bakke-Jensen respectively).

The man in this meme is indeed the Russian minister of defense. Sergey Shoigu was first appointed to the job in 2012 and is still in his position as of this writing. The photograph of Shoigu was taken in December 2013 at a military funeral for Mikhail Kalashnikov, the man who designed the AK-47:

Norway, Sweden, the Netherlands, and Germany are hardly the only countries who have had women serve in defense ministry positions. A recent paper by Tiffany Barnes, an assistant professor at the University of Kentucky, and Diana O'Brien, an associate professor at Texas A&M, found that found that "by 2012, women had been appointed to the ministry of defense in 41 countries."