A supposedly deceased FBI agent was not caught breaking into Trump Tower with an illegally silenced pistol. 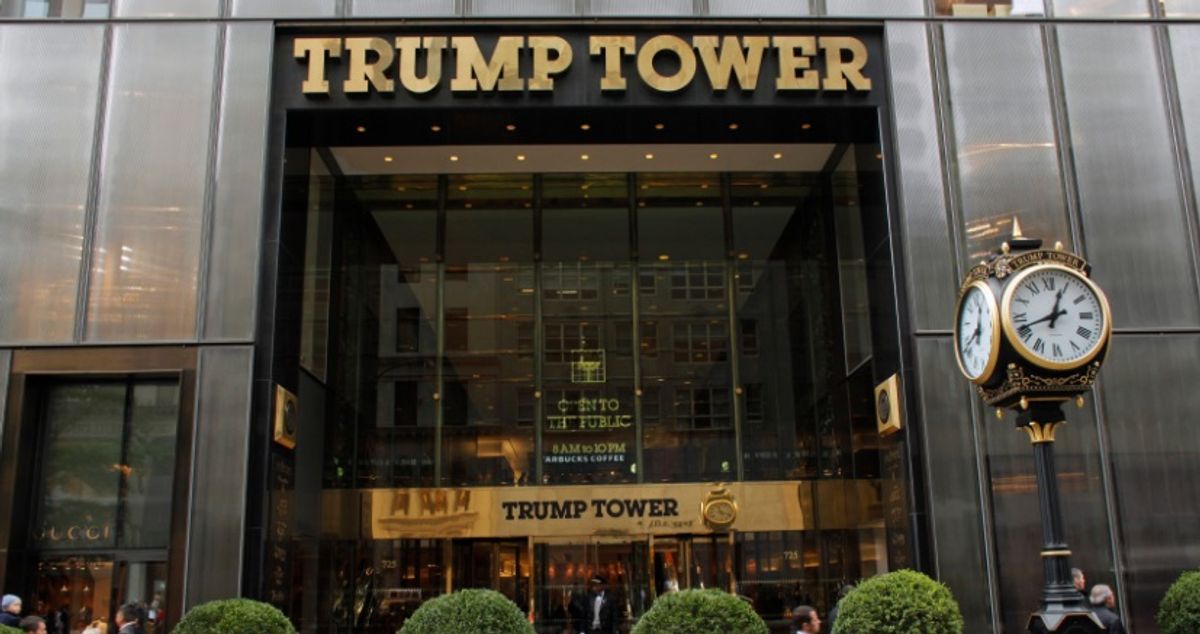 On 2 August 2016 the web site Get Off the BS published an article reporting that a Federal Bureau of Investigation (FBI) agent who had purportedly been killed in 2007 had just been captured during an attempt to sneak into Trump Tower that same day armed with an illegally silenced pistol:

A source within the NYPD has reported that an armed 62 year old man tried to sneak in to the Trump Tower late Tuesday night. Interestingly the suspect who was found with a semi-automatic handgun fitted with a silencer has been identified as Barry Lee Bush, a former Newark NJ FBI agent who has been dead since 2007.

According to the NYPD source, Bush was arrested for trespassing and for illegally carrying a pistol fitted with an illegal silencer. During his booking at the NYPD Jail, Bush’s fingerprints were submitted to the National Crime Information Center, which immediately reported Bush’s true identity.

“I wasn’t sure if our system had malfunctioned, so I rescanned his fingerprints to confirm that our system was working correctly. There was no system error. The man we have in custody was reported deceased in 2007 after being shot in an attempted bank robbery, “one source speaking on anonymity said.

The New York Times reported on April 6, 2007 that Barry Bush, a veteran F.B.I. agent on a bank-robbery detail was fatally wounded apparently when another agent’s weapon accidentally discharged during a confrontation with three gunmen outside a bank in a quiet town in central New Jersey.

The article contained a whole host of bizarre and difficult to parse claims, beginning with the inclusion of an FBI agent supposedly killed in the line of duty in 2007, suggesting that Bush's demise was faked and the agent subsequently went deep undercover to work for operatives of the U.S. government or other entities.

The New York Times reported on the death of agent Barry Lee Bush in April 2007:

While the circumstances were still under investigation, a statement by the F.B.I. said that the agent, Barry Lee Bush, 52, of the bureau’s Newark office, “may have been fatally wounded as a result of the accidental discharge of another agent’s weapon during a dynamic arrest situation.”

In the 99-year history of the Federal Bureau of Investigation, Mr. Bush, who was married and the father of two grown children, was the 51st agent killed in the line of duty, and the first to be fatally shot in 10 years. He had worked for the bureau for almost 20 years, in Newark, Kansas City, Mo., and elsewhere.

Get Off the BS also framed Trump Tower as if it were the private residence of Donald Trump rather than as a Midtown tourist attraction at which Trump himself is rarely present. If some shadowy figure had really been targeting Trump for a violent attack, he would have been better served making use of the candidate's campaign schedule (freely available via his social media feeds) rather than breaking into Trump Tower.

The article layered on additional nebulous conspiracy claims, asserting that an FBI page about Bush "went down" after Get Off the BS achieved their big scoop:

It is not clear what Bush’s intentions were for sneaking around security to presumably access the service elevators at the Trump Tower, however it does not take much imagination as to why Bush was carrying a silenced pistol at the time of his arrest.

Trump is in Florida today for rallies in Daytona Beach and Jacksonville. Trump has informed us that he was not at the Trump Tower yesterday evening and did not have any information about the incident, other than an armed man had been arrested at his building and that it was not clear about what Bush’s intentions were.

Contrary to those claims, a page memorializing Barry Bush is accessible on the FBI's web site.

Get Off The BS doesn't advertise itself as a fake news site, but the site does include a satire category and an "About" page that states:

Neither my wife and or I have any experience as writers. Although I have wrote and been highly praised on several of the articles I have written on this site, the majority of the articles you will find on this web site are articles from main stream media sources, that my wife and I have removed the bullshit about Donald Trump from and replaced the same with the actual truth.

Of course, any time we find the opportunity to bash his opponents, we definitely take advantage of all the liberties afforded to us by our Free Speech rights ... the same rights these scumbags take advantage of to heap a mound of bullshit on Mr. Trump.

Shoveling up the bullshit, while informing the general public of the truth about Donald J. Trump and having some fun in the process, is the primary mission of Get off the BS. Thank you so much for stopping by. Trump for President 2016.

Frankly, we don’t give a damn if you believe what we write or not. We challenge you to call BS if you have concrete proof we have published bullshit. In fact, we encourage all of our friends and family members not believe anything coming from mainstream, alternate and government media sources.

And for record, we are the people responsible for tipping off ABC, that Clinton would be meeting with Loretta Lynch at the Skyharbor Airport In Phoenix Arizona. The chances of the world hearing about the meeting without our tipping off the ABC reporter who busted them, is very slim.

We contacted the NYPD to ask whether any arrests were made at Trump Tower on 2 August 2016, or if any other recent arrests matched the one reported by Get Off the BS. A public information officer confirmed to us that no such incidents had been reported or responded to by the NYPD, despite Get Off the BS's claim that Barry Bush was arrested and booked by the NYPD on 2 August 2016.

What did happen was that an inebriated security guard with a concealed carry permit (and no ill intent) was briefly taken into custody for intruding into a security area outside Trump Tower:

He wasn’t gunning for The Donald — he was just drunk and didn’t want to be told where to walk.

The armed man taken into custody outside Trump Tower with a gun as Donald Trump walked nearby was a retired cop who had no plans to shoot the blowhard billionaire, officials said.

Anthony Shark, 54, was “walking through a secured area” along the sidewalk outside of Trump Tower on Fifth Ave. and E. 56th St. just after 10 p.m. when he was busted, officials said.

Shark, a retired NYPD officer, works as a security guard at tony Harry Winston jewelry, which has a store across the street from Trump Tower, prosecutors said.

He has a permit to carry a concealed weapon, officials said.

Sources said he tried to barge through a frozen zone set up for the GOP presidential nominee’s approaching motorcade.