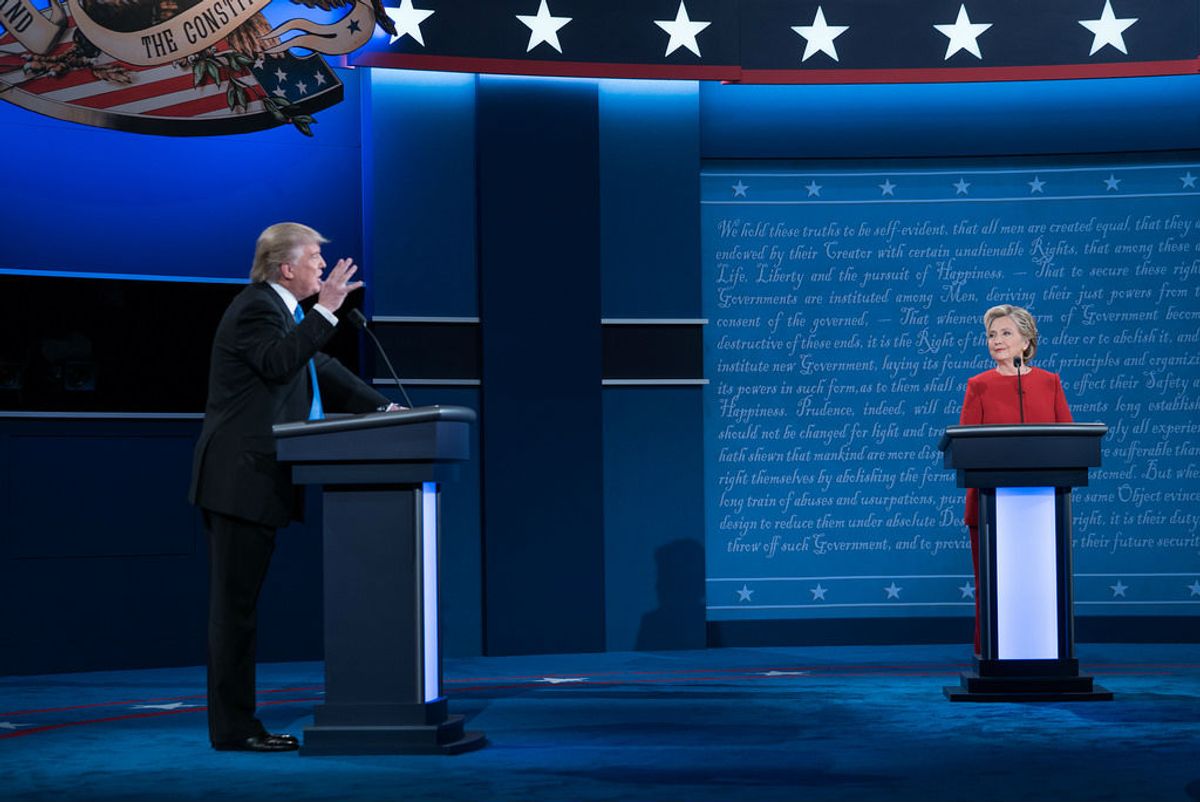 Just when we thought we'd had our fill of debate-related conspiracies, a new one came along, this one in the form of a video purportedly documenting that Democratic presidential candidate Hillary Clinton and moderator Lester Holt had colluded to rig the first presidential debate through a system of secret hand signals:

Scratching one’s face is one of the oldest signals in the book. You can be sure if this was a blackjack table and the house noticed a player making similar signals to a dealer they’d be investigated.

When the alt-right web site True Pundit shared the video, they did so along with the additional claim that Clinton had never made similar gestures in previous debates, campaign appearances, or speeches:

Before critics view this video and scream Conspiracy, True Pundit cross referenced Clinton’s speeches, campaign appearances and her 2008 debate performances against President Obama. According to that analysis, Clinton never previously used these hand motions to supposedly scratch her face. In fact, she rarely touches her face at all. (So, you haters can save the trouble of instructing people to remove their tin-foil hats.)

The above-displayed video does not provide any evidence that Hillary Clinton and Lester Holt communicated via hand signals so that Clinton could indicate to Holt when she wanted him to call on her so she could get in a "zinger." The creator of the video simply strung together several unrelated events — Clinton scratching her face, Holt making a comment, Clinton replying to Trump — and then claimed that they were somehow connected to a furtive signaling plot without providing any proof.

But before we dig deeper into the video, let's look at the accompanying claims about it from True Pundit and Infowars.

Hillary Clinton has been in the public eye for decades. She was the First Lady of Arkansas in 1983, the First Lady of the United States in 1993, a U.S. Senator in 2001, a presidential candidate in 2008, Secretary of State in 2009, and and a presidential candidate again in 2016. It is simply ridiculous to claim that Clinton never once touched her face during a speech, campaign rally, or debate:

It should be noted that Hillary Clinton was not the only one making these gestures during the first presidential debate: It should also be noted that (as shown in the image at the head of this page) the two candidates were physically separated on the stage, and therefore in order to catch the supposed "signals" from Hillary Clinton, moderator Lester Holt — who didn't have the advantage of the split-screen shot presented to television viewers — would had to have been rather obviously watching her even when she was not speaking.

If Donald Trump truly "dominated the early part of the debate" but then lost his advantage, the more logical explanation is that his opponent's strategy to throw him off his game simply worked as expected:

The quiet Mr. Trump took the first shift, presenting a general-election version of his forceful campaign persona minus the bluster, insults and defenses of his anatomy. He pushed his case firmly, hitting his campaign’s focal points on the economy and trade.

But it didn’t take long for Mrs. Clinton to find the other Mr. Trump under that thin second skin. Her needling began immediately. She referred to her opponent as “Donald,” where he pointedly called her “Secretary Clinton.” (“Yes, is that O.K.?” he asked at his first reference to her.) She referred to his starting a business with a “$14 million” loan from his father, which Mr. Trump preferred to call a “very small loan.”

The digs targeted Mr. Trump’s status and founding mythos, triggering his image-protection reflex. He became combative and rattled, letting his opponent lead him down rhetorical detours (at one point he revived an old feud with Rosie O’Donnell) knowing that he would follow his ingrained ABCs: always be counterpunching.

It was Tony Soprano vs. Dr. Melfi, TV’s biggest antihero blustering against the woman who had gotten inside his head.

This conspiracy theory also doesn't account for the much more obvious approach that if Hillary Clinton really wanted to say something during the course of the debate when it wasn't her turn to speak, she could simply have interrupted her opponent rather than invoking secret hand signals and waiting to be called upon by the moderator — as she did in fact do multiple times ... while Donald Trump also did so, but three times as often.