Jockey Frank Hayes did indeed win a race at Belmont Park in New York in 1923 despite suffering a fatal heart attack. However, photographs frequently attached to this claim do not feature Hayes or this 1923 race.

An interesting (and morbid) piece of trivia about a dead jockey winning a race at Belmont in 1923 is frequently circulated on social media. One popular iteration of this claim states: “In 1923, jockey Frank Hayes suffered a heart attack half-way through the race at Belmont Park in New York and won despite being dead.” The story about Hayes is true, but this photograph does not come from that 1923 race. It actually shows jockey Jim Pike riding a horse named “Peter Pan” during a 1933 race at the Randwick Racecourse in Sydney.

We have not been able to find any photographs from Hayes’ fatal race. On June 8, 1923, the New York Daily News published a picture of people mourning Hayes’ death: 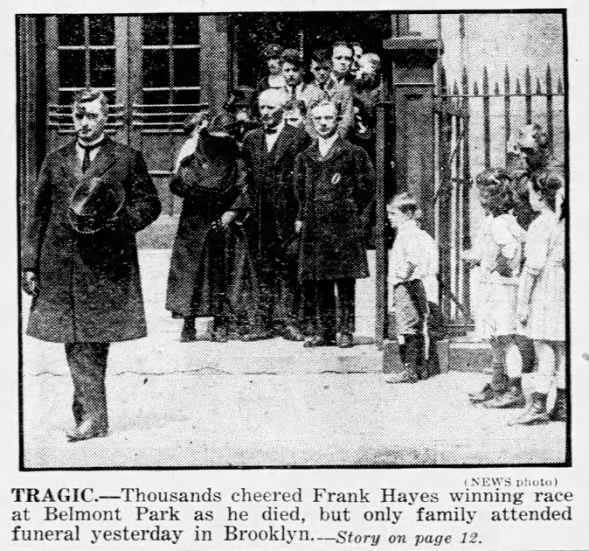 Hayes was an apprentice jockey, someone at the start of a jockeying career who earns his keep by maintaining stables, training horses, and doing other stable work, when he was given the chance to ride a horse named Sweet Kiss during the steeplechase event at Belmont Park in New York. Sweet Kiss was given 5-1 odds, but Hayes managed to pilot the horse to an early lead. As the finish line approached, Hayes was seen to slump over in his saddle. While Sweet Kiss and Hayes finished the race in first, the jockey soon fell to the track from an apparent heart attack.

The Buffalo Courier reported at the time:

After piloting Sweet Kiss to an easy victory in the steeplechase at Belmont park today, Rider Frank Hayse rode to the judges stand and fell from the saddle, dead. It was the first time he had jockeyed a winning jumper. When Sweet Kiss gracefully leaped the last barrier and straightened out for the run to the wire, Hayes was seen swaying in the saddle. He slipped to one side, then recovered. Attendants hurried toward him when the race ended but he toppled to the track before they reached him.

As noted in the article above, Hayes’ heart failure was likely spurred by his efforts to lose weight before the race.

Hayes was 22 years old and it appears that this fatal race was both his first and last. The Times Union reported that Hayes had been working as a horse trainer for about three years and that his “highest ambition” was to become a jockey. When he was given the chance to ride Sweet Kiss, Hayes jumped at the chance:

He died a victim of his almost fanatic enthusiasm and worship of horsemanship. According to his mother, Frank had been interested in horses from his earliest childhood and his highest ambition was to be a jockey, and he had entered the field contrary to her advice. He had been employed as a trainer for three years before Mr. Frayling assented to his plea to let him ride Sweet Kiss in the race.

Hayes was tasked with losing more than 10 pounds in 24 hours before his debut race. Buffalo Morning Express reported that Hayes jogged for several hours before the race and denied himself water. When he finally took the saddle, he was weak and tired. 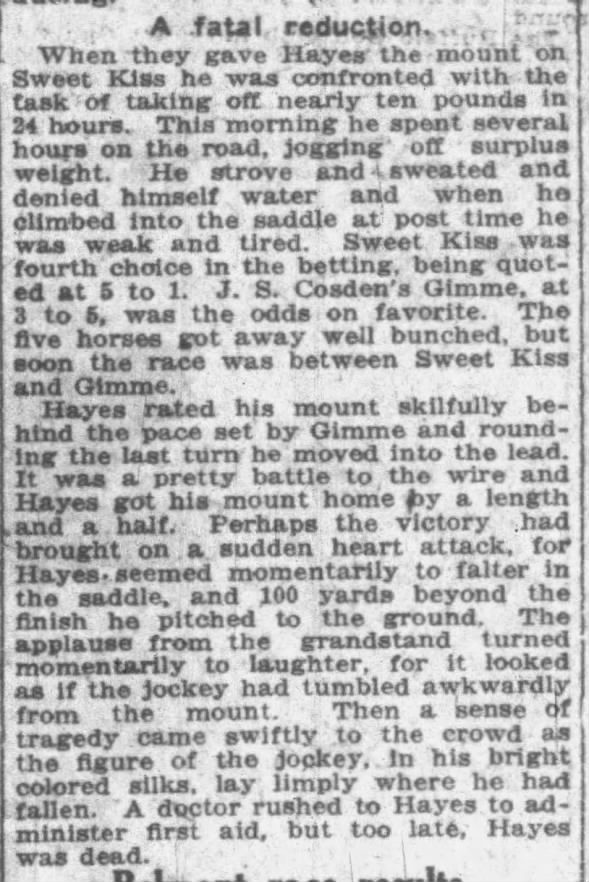 While we have not been able to find any photographs of Hayes riding Sweet Kiss, we did find one picture of this young jockey that was published by the New York Daily News: