Did Dave Ramsey Write This 'Wake Up America' Op-Ed?

A months-old opinion piece was recirculated on social media in January 2021, this time with a famous name (incorrectly) attached to it. 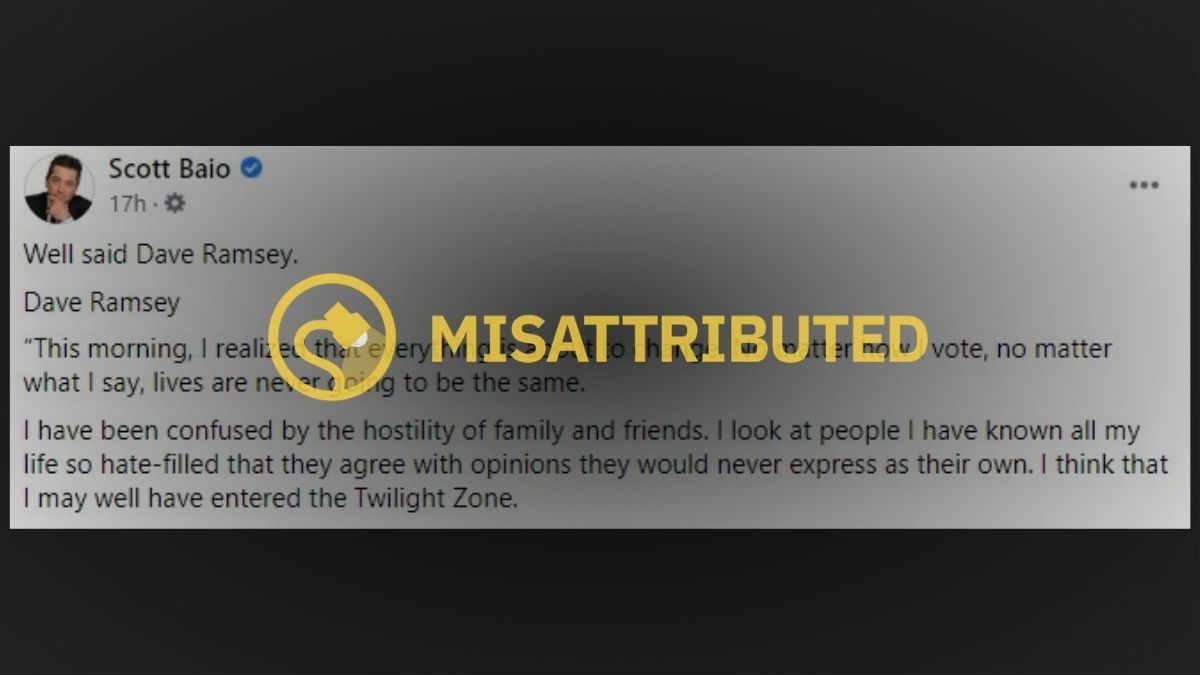 On Jan. 7, 2021, a lengthy piece of text urging Americans to "wake up" was widely circulated on social media along with the claim that it had been penned by radio host Dave Ramsey. Scott Baio, a conservative pundit best known for playing Chachi on the 1970s sitcom "Happy Days," was one social media user who misattributed this text to Ramsey: The radio host posted a message to Facebook on Jan. 7 to clarify that he did not author this post:

In addition to Ramsey's denial, we found versions of this text posted on the internet as far back as October 2020. At the time, Ramsey was not credited as the author.

This text was originally penned by "Bruce Hendry" and published on the right-wing website FrontPageMag.com on Oct. 7, 2020, under the title "Living in the Left's Upside Down World."

Here's an excerpt from the article, which is basically a list of grievances that Hendry finds confusing or hypocritical:

This morning, I realized that everything is about to change. No matter how I vote, no matter what I say, lives are never going to be the same.

We see other countries going socialist and collapsing, but it seems like a great plan for us.

Somehow it’s un-American for the census to count how many Americans are in America.

If a dude pretends to be a woman, you are required to pretend with him.

It was cool for Joe Biden to "blackmail" the President of Ukraine, but it’s an impeachable offense if Donald Trump inquiries about it.

And, pointing out all this hypocrisy somehow makes you a "racist".

Nothing makes sense anymore. No values, no morals, no civility and people are dying of a Chinese virus, but it is racist to refer to it as Chinese even though it originated in China.

Wake up America, the great unsinkable ship Titanic America has hit an iceberg, is taking on water and sinking fast.

While Hendry prefaced this article with a paragraph insisting that this information was "factual," not "political," many of the items listed above are based on misinformation. For example, President-elect Joe Biden did not blackmail the President of Ukraine, viruses don't have nationalities, transgender people are not "pretending," and the U.S. Census counts "every resident in the United States."

So, what does Dave Ramsey have to do with this?

One common tactic of purveyors of disinformation is to falsely claim that an extreme view was espoused by a well-known and respected voice. This gives the extreme opinion an air of credibility, and makes it more palatable to a mainstream audience.

The article above originated on a right-wing website and initially gained currency among a similar-minded crowd on conservative forums and social media networks like 4chan. In January 2021, someone tried to get this article in front of a larger audience by falsely claiming that this opinion originated with Ramsey, a popular radio host and finance guru with mainstream appeal. By attaching Ramsey's name to these opinions, the article was spread as if it had been "endorsed" by someone in the mainstream, therefore making it more palatable to people who might have initially balked at this article if they encountered it on a hyperpartisan website.

But Ramsey, of course, did not actually write this article.