The ice cream brand has been no stranger to speaking out on a number of issues. 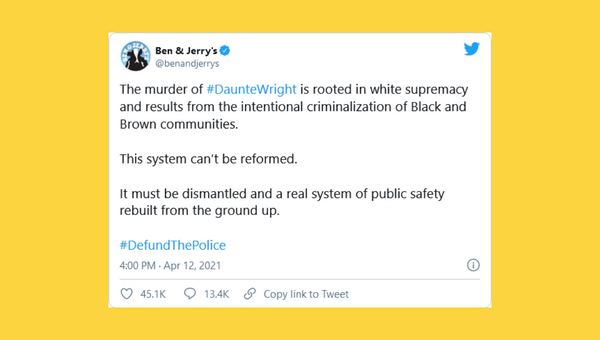 Since April 12, 2021, various political blogs shared a purported tweet from the Ben & Jerry's ice cream brand that mentioned the killing of Daunte Wright in connection with white supremacy. The message included a hashtag referring to the defunding of police departments, #DefundThePolice.

The tweet about Wright's killing being "rooted in white supremacy" was a genuine message from the Ben & Jerry's ice cream brand. They also called for the dismantling and defunding of police departments.

The Chicks On The Right Facebook page said of the Ben & Jerry's tweet: "Look what the leftists at Ben & Jerry are saying..."

A top-voted comment said: "I quit buying their crap long ago when they first started their liberal BS!"

Another comment read: "No more Ben & Jerry's in this house."

The conservative blog The Daily Caller also posted: "An ice cream brand is now calling for the dismantling and defunding of police..."

One of the most liked comments said of the story: "I call for the dismantling and defunding of Ben and Jerry's ... and I wouldn't touch their ice cream if it was the last one in the freezer."

Another comment said: "So instead of telling criminals to stop committing crimes and stop resisting arrest and stop running from the police ... let's get rid of the police ...? half this country has no common sense."

This was far from the first time that Ben & Jerry's has commented on societal issues. For example, in June 2020, the company tweeted and blogged about defunding police departments following the death of George Floyd.

The Associated Press previously published an explainer on the intent of the grassroots campaign to defund police departments.

On the subject of police officers, the two Ben & Jerry's founders, Ben Cohen and Jerry Greenfield, were once the subject of a digitally manipulated sign hoax. In 2016, a sign supporting Bernie Sanders for president was doctored to instead say "We Hate Cops."

In sum, it was true that Ben & Jerry's said the killing of Daunte Wright was "rooted in white supremacy" and called for the dismantling and defunding of police departments.