Are These Daredevils Playing Tennis on an Airplane?

A photograph of two wing walkers holding tennis rackets on top of an airborne airplane is genuine, but they weren't playing a real game of tennis. 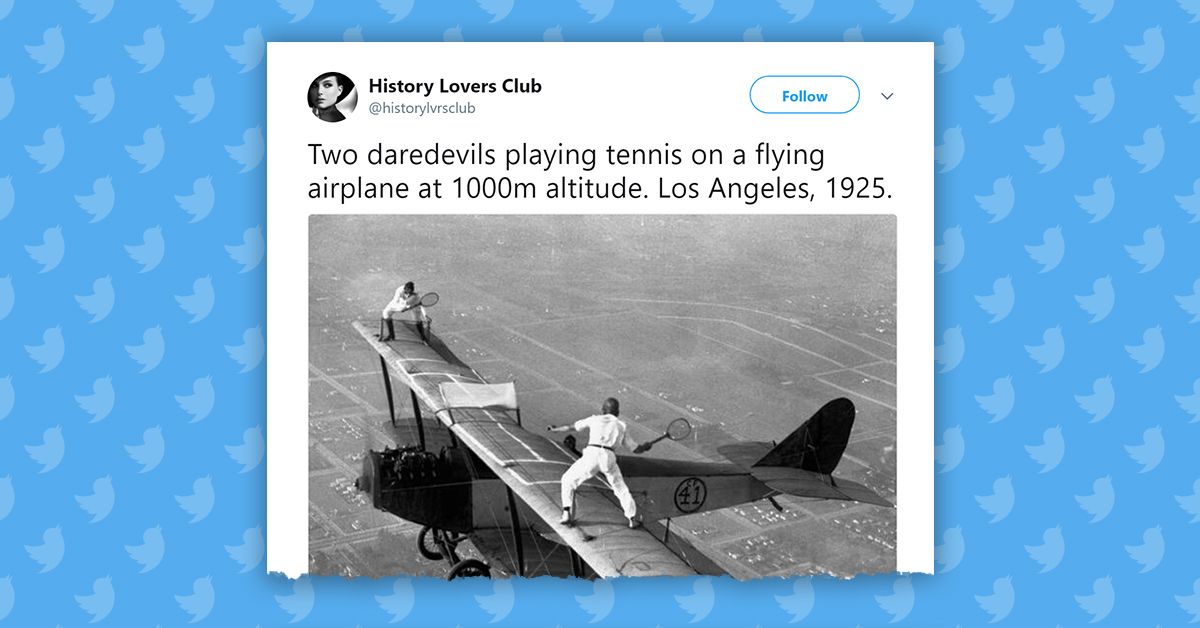 Claim:
A photograph shows two daredevils playing tennis on the wings of an airplane.
Rating:

An image of two daredevils purportedly playing a game of tennis on the wings of an airplane soaring high above the city of Los Angeles may appear at first glance like the work of some sort of editing trickery.

This photograph, however, is real; it documents a genuine act of aerial acrobatics performed by Gladys Roy and Ivan Unger in November 1925: Gladys Roy and Ivan Unger were both "wing walkers" or "barnstormers" and frequently performed high-flying stunts at state fair type events. Although news reports at the time reported that Roy and Unger "played" a game of tennis, we are slightly skeptical, given the laws of physics, that they were actually hitting and returning serves.

Here is a blurb about the stunt published in the Tampa Morning Tribune in November 1925: On the wings of a speeding plane, 3,000 feet in the air above Los Angles Glady Roy, aviatrix, and Ivan Unger attempted a tennis match. There was no umpire, and the players did not say whether they went after the balls that were batted out of bounds.

The stunt was performed on the wings of an Curtis JN-4 "Jenny" plane piloted by Jack Tomac, which had a top speed of about 80 mph. Even at this relatively low speed, however, the physics of hitting a ball back and fourth would be problematic. Furthermore, since this stunt was performed thousands of feet above the spectators, there was no real need to use a tennis ball, as it would be difficult to see from the ground.

Indeed, a site dedicated to aviation pioneers Jack and Helen Fryer noted that this tennis match was played without a ball:

Tennis anyone? Well Gladys Roy and Ivan Unger did so regularly- just at 3000 feet, where it was assumed the air was crisper. Of course, sans the tennis balls, as retrieving an “out of bounds” tennis ball meant landing first. Frank Tomac was the pilot on many of these matches, one recorded on October 25, 1925, for the Movie house Newsreels.

The tennis game may have been staged, but the stunt was real. A second photograph available via Getty Images shows Unger (foreground) and Roy (background) in slightly different positions (a tennis ball can't be spotted in either picture):

Unger was a member of the well-known barnstorming troupe known as the 13 Black Cats. It's unclear if Roy was ever considered an official member of the group, but she did perform alongside them on occasion and made a name for herself by doing the Charleston on the wings of a plane. According to her letterhead, Roy also held the record for the "world's lowest parachute jump" from just 100 feet.

Roy talked about some of her stunts in a May 1926 profile published in the Los Angeles Times:

I do everything from the Charleston to playing tennis on the wings of a speeding ship, to hanging by my legs from the landing gear as the ship comes to earth. The moment my fingers touch the earth i snap my body upwards and the plane alights in a cloud of dust.

It looks ten times more thrilling than it really is because the crowd cannot see me on account of the dust cloud. Of late, the crowds are beginning to tire of even my most difficult stunts and so I must necessarily invent new ones, that is, if I want to hold my reputation as a dare-devil.

Eventually an accident will occur and then ...

The exhibitors know and welcome these accidents, for their ears are turned to the clink of gold as it falls into their strong boxes. Thus does the event spell success or failure.

Were one to turn back the pages of this world they would have probably found me again in the Roman circus. I would have been crying: "Hail, Caesar! We who are about to die, salute thee! And promoter Caesar would have turned 'thumbs down.'"

Sadly, after all of her high-flying stunts, Roy's life was cut tragically short in 1927 when she was struck by a propeller at the end of a photoshoot:

Miss Roy had climbed into the plane to have her picture taken with an Ohio bathing beauty who won a place to compete in the Atlantic City annual bathing beauty contest. The picture was nearly finished being taken when the woman flyer started the engine. She stepped down from the fuselage and unconsciously walked into the propeller.

We couldn't find any footage of Roy and Unger's tennis match, but we did find this video of another woman associated with the Black Cats, Gladys Ingle, changing a tire mid-flight: