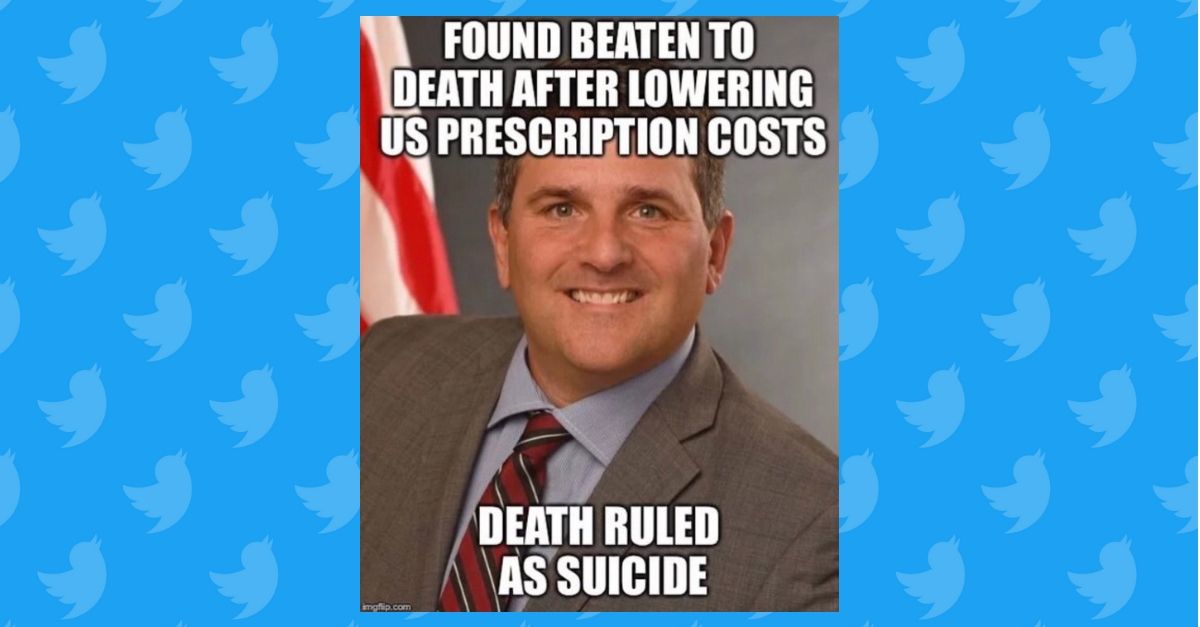 On 1 November 2018, the Trump administration's senior adviser on drug pricing reform, Daniel Best, was found "unresponsive" near the garage door exit of a Washington, D.C., apartment building. He was pronounced dead at the scene by first responders.

A statement released the same day by Health and Human Services Secretary (HHS) Alex Azar mourned Best as a "friend and colleague" but addressed neither the circumstances nor the cause of his death. No other details were released to the public.

Two weeks later, on 15 November, the office of Washington, D.C.'s chief medical examiner announced that Best had died of "multiple blunt force injuries." His death was ruled a suicide. No other information was provided.

Internet conspiracy theorists questioned that ruling. Noting the pharmaceutical industry's objections to the very task Best was hired to accomplish (i.e., lowering prescription drug costs), not to mention President Trump's announcement days before Best's death of a plan to reduce Medicare drug prices and the fact that Best died of blunt force injuries, the theorists took to social media to float the idea that Best was the victim of foul play and not suicide:

BREAKING: Death of Trump HHS official, Daniel Best, tasked with getting lower drug prices from pharmaceutical companies is ruled a suicide, even though he died from "multiple blunt force injuries."

Nothing to see here folks. pic.twitter.com/qiWNH0epeQ

Far-right conspiracist websites followed suit. An 18 November article on Neon Nettle suggested that the the public was being asked to believe that Best had beaten himself to death:

The Chief Medical Examiner’s verdict raised questions among the health community, with many people refusing to believe Best killed himself by repeatedly hitting himself with a blunt object until he died.

“How does one kill themselves by hitting themselves with a blunt object? Repeatedly?”

So did he lie down under a garage door and let it hit him “multiple times” or did he beat himself to death with a baseball bat? How does that work? Add to the very few actual articles on his death -- this man was described as one of Trump’s “senior” HHS officials working with Alex Azar. Things that make you go hmmmm.

There's a fallacious assumption underlying this notion, however: namely, that blunt force injuries can only be sustained in the course of a physical attack by an assailant (or oneself). But that isn't how forensic pathologists define "blunt force injury." According to Prahlow and Byard's Atlas of Forensic Pathology, a blunt force injury is any "resulting from impact with a blunt object, i.e., one that does not possess any sharp edges":

Examples of blunt objects include hammers, baseball bats, fists, the interior surfaces of vehicles, roads, trees, floors, walls, furniture, and even fluid objects such as bodies of water (if the speed of impact is sufficiently high).

Medical University of South Carolina pathology professor Nicholas I. Batalis observes in "Forensic Autopsy of Blunt Force Trauma" (Medscape, 2016) that blunt force injuries can be caused in myriad ways that have nothing to with assault and battery (emphasis added):

Blunt force trauma is routinely involved in cases classified as accidents, as well as in cases of suicide and homicide.

Finally, we put the known facts of the case to Thomas Sporn, M.D., Chief of the Section of Pulmonary and Thoracic Pathology at Duke University Medical Center, and asked him if a ruling of suicide makes sense. He responded via e-mail to say:

To date, we aren't privy to a full account of how Daniel Best sustained his injuries, nor their precise nature, nor any other evidence (such as a suicide note, if one exists) that prompted medical examiners to conclude that he killed himself. But there is clearly nothing contradictory about his having suffered blunt force injuries during the commission of a suicide. Given the facts at hand, there is no reasonable basis for speculation to the contrary.

Correction [21 November 2018]: A previous version of this article incorrectly attributed a slogan to Neon Nettle.