Did Damar Hamlin Die from the COVID Vaccine and a 'Body Double' Take His Place? 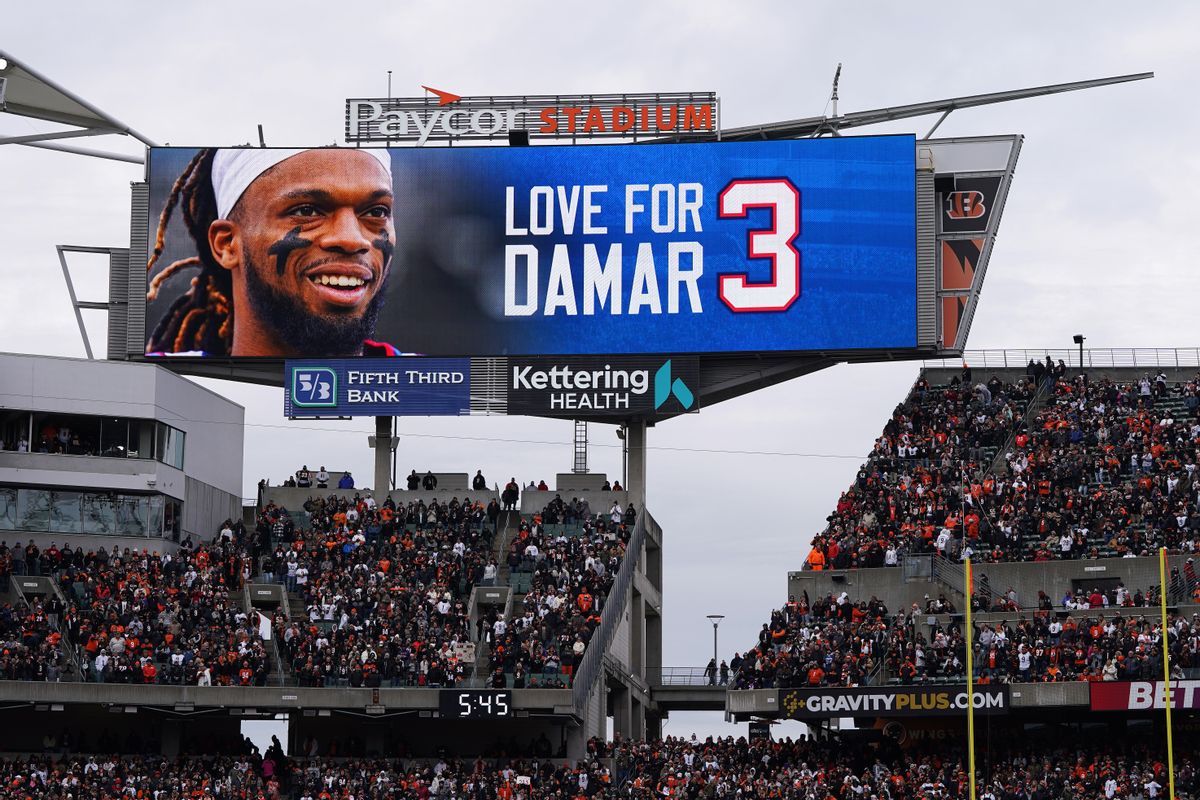 Claim:
After Damar Hamlin collapsed from cardiac arrest during an NFL game on Jan. 2, 2023, he died due to the COVID-19 vaccine, and a "body double" began standing in for him at public appearances.
Rating:

On Jan. 22, 2023, weeks after collapsing during an NFL game and being hospitalized for cardiac arrest, Damar Hamlin returned to the team's stadium to watch a playoff game. Wearing a red outfit, his head covered with a hoodie, a mask, and glasses, the first public appearance at a game since his medical emergency sparked numerous online rumors that he was not really there — rather, according to one conspiracy theory, an individual was standing in for him after the "real" Hamlin had died due to the COVID vaccine.

However, that claim was nothing more than a baseless conspiracy theory. The social media posts did not say how, or where, they got their information about Hamlin's purported death and many came from accounts with histories of spreading misleading stories about the effects of COVID-19 vaccines. Furthermore, reputable news outlets, official social media accounts for the Bills and NFL, and the team's coach confirmed the football star attended the Jan. 22 game. For those reasons, we rate this claim "False."

Many social media posts attempting to ring the alarm on the conspiracy pointed to video footage of Hamlin entering the Jan. 22 game with his head covered. Other videos from the game, including clips from CBS and the NFL, also did not show his face.

The concept of "body doubles" is a popular type of conspiracy theory on the internet that we have debunked numerous times. It often pops up after a famous personality dies or suffers from a medical emergency.

As far as the rumors about Hamlin, some social media posts took the theory a step further: Not only did they promote the idea that an individual was supposedly standing in for the real "Hamlin," but they blamed the COVID vaccine for allegedly killing him or making him unresponsive. (We previously addressed unfounded rumors about the vaccine supposedly causing his cardiac arrest.)

If, hypothetically speaking, Hamlin had died for any reason, much less because of complications from vaccination, there would be public records documenting his cause and manner of death, and when it supposedly happened. Those files, if they existed, would be eminently newsworthy — that is, journalists would see them during their routine scans of medical investigators' rosters of recently deceased people and then use their contents to let the public know about Hamlin's purported passing.

Hamlin himself seemingly addressed the theories by tweeting a photo of himself next to a wall mural and doing his signature "heart" gesture, with the caption "Clone."

As far as the Jan. 22 game, the official Buffalo Bills Twitter account posted a video of Hamlin arriving at the stadium, his face still covered, and his mother and brother in attendance, as well. "Welcome home, @HamlinIsland," the tweet read.

He was also seen watching the game from a private room, gesturing to the crowd and making his signature "heart" sign with his hands. The NFL tweeted a video of that moment, footage in which Hamlin was not totally visible, in part, due to the game's wintery weather conditions.

From another angle inside that room, the Buffalo Bills' Twitter account showed him standing alongside his brother.

Bills coach Sean McDermott told reporters that Hamlin had been coming to the stadium, meeting his teammates, and showing signs of recovery since his cardiac arrest on the field weeks ago. "It's limited, just overall. But he comes in and really just started really today or yesterday and just trying to get back to a little bit of a routine and just get himself acclimated again and taking it one step, one baby step, at a time here," McDermott told reporters.

It's unclear why Hamlin seems to have chosen not to show his face in any of the photographs or videos. We have reached out to the Buffalo Bills for comment and will update this article if and when we hear back.