Did Dakota's Steakhouse in Texas Defend an LGBTQ Server?

A woman named Debbie posted a negative review on Facebook. Then the owner responded. 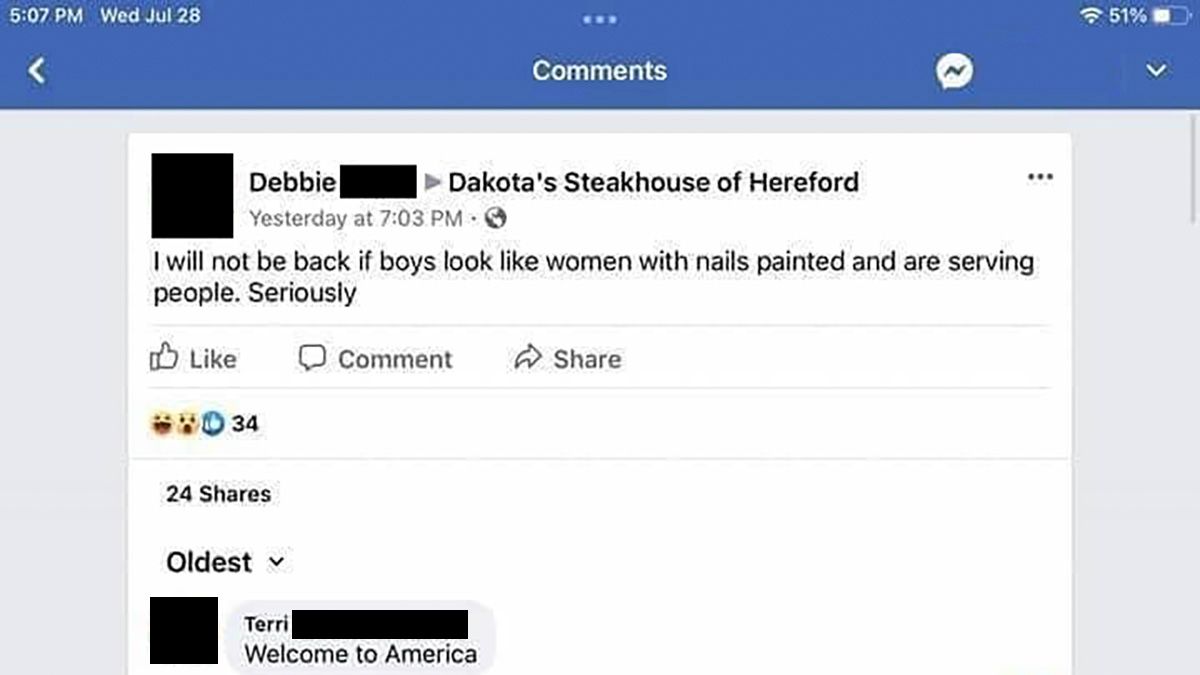 It's true that Dakota's Steakhouse in Hereford, Texas, defended a server after a Facebook user named Debbie posted what appeared to be anti-LGBTQ thoughts. However, a manager told us that while the employee was part of the LGBTQ community, that person did not identify as transgender, despite what a popular Reddit post claimed.

On Dec. 6, 2021, a new post was created in the r/insanepeoplefacebook subreddit on Reddit that read: "Debbie refuses to be served by trans wait staff; husband even comes unglued at the thought! Restaurant does not care." Included with the new thread was a screenshot from Facebook. We traced the focus of this story about a woman named Debbie and her complaint about a server to Dakota's Steakhouse in Hereford, Texas.

In the post, a Facebook user named Debbie wrote: "I will not be back if boys look like women with nails painted and are serving people. Seriously." The post received tens of thousands of upvotes with an upvote percentage of 98%, making it one of the most popular threads on Reddit for the entire day.

This was followed by a comment that read: "Welcome to America."

Later, Josh Murray, the owner and operator of Dakota's Steakhouse of Hereford, responded to Debbie: "At Dakota's Steakhouse, we support our staff 100%. No matter their religion, race, criminal history, or sexuality; I don't judge. I choose to provide an opportunity of employment for everyone. If this offends you, then please stay at home. After all, if you could cook Debbie, then maybe Scott wouldn't be looking at his server all night."

A manager at Dakota's Steakhouse told us by phone that the post and response were both real and that it all happened many months before the December 2021 Reddit post was created.

Also confirmed was the fact that the Dakota's Steakhouse server referred to by Debbie was part of the LGBTQ community. However, the employee did not identify as transgender, according to the manager, contrary to the Reddit poster's claim that the server was "trans." For privacy reasons, we did not receive any further information about the employee.

The post from the Facebook user named Debbie led to a wave of support for the Dakota's Steakhouse location.

Lorelei posted: "Love the support they give their staff." Kasey remarked: "We will be headed here soon! Thank for FULLY supporting your staff!" Penny also said: "Planning a trip, just so I can come support your business and staff! Dakota’s is a wonderful example of standing with ALL their employees!"

While looking for the facts behind this true steakhouse story, we found that the town of Hereford just so happened to be dubbed the "Beef Capital of the World." According to the U.S. Census Bureau, its population in 2010 was just over 15,000 residents. In sum, it's true that Dakota's Steakhouse in Hereford, Texas, defended a server at the restaurant who was part of the LGBTQ community after a woman named Debbie made a negative post.