Republican lawmakers and right-leaning commentators seized upon remarks made by the New York Democrat during an interview on "Good Morning America." 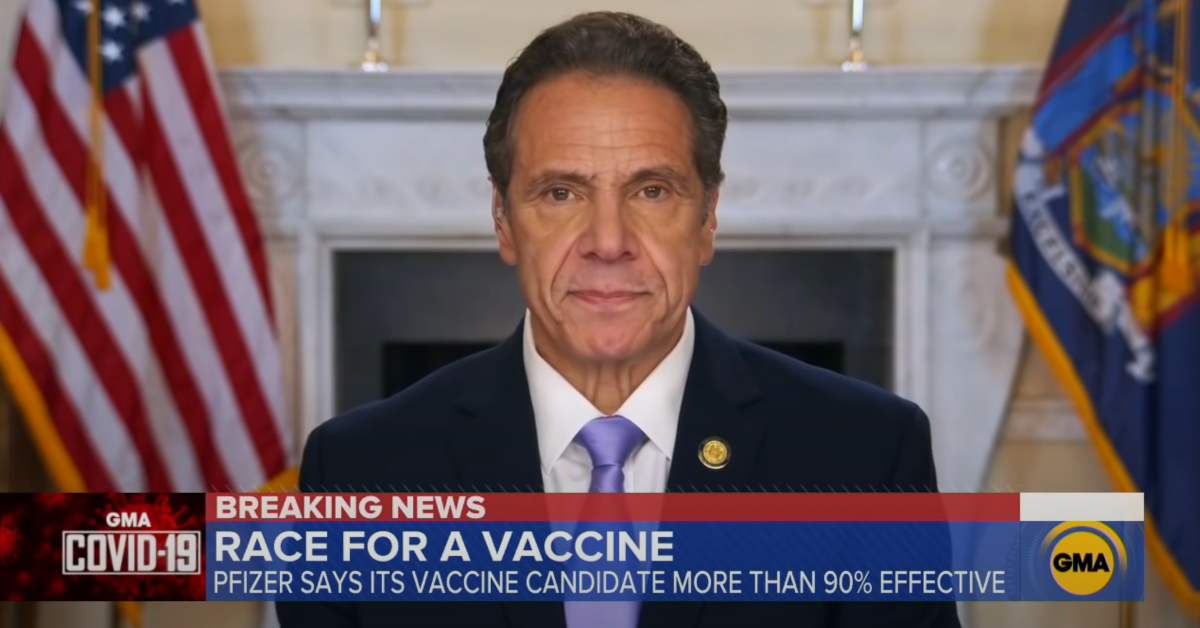 Claim:
On Nov. 9, 2020, New York Gov. Andrew Cuomo said it was "bad news" that Pfizer had developed what appeared to be a successful COVID-19 vaccine, during U.S. President Donald Trump's tenure.
Rating:

Cuomo said it was "bad news" that the administration of outgoing President Donald Trump would be responsible for creating a plan for distributing a COVID-19 vaccine, because he believed they would mishandle that planning.

Cuomo did not say Pfizer's announcement of positive testing data for their COVID-19 vaccine candidate was, itself, bad news, and he explicitly welcomed that development. He also did not say he would prefer distribution of a vaccine be delayed until President-elect Joe Biden was in office; nor did he articulate the position that he was dismayed that Trump would garner credit or plaudits for being in office when Pfizer made its announcement.

In November 2020, a raft of Republican lawmakers and right-leaning commentators condemned Democratic New York Gov. Andrew Cuomo for, according to them, politicizing Pfizer's announcement that the COVID-19 vaccine it had been developing appeared to be 90% effective.

On Nov. 9, Tom Elliott, the right-leaning founder of the media company Grabien, tweeted out a short clip of Cuomo's appearance on ABC's "Good Morning America," earlier that day. In the clip, Cuomo says:

"Well, it's good news-bad news, George [Stephanopoulos]. The good news is the Pfizer tests look good, and we'll have have a vaccine shortly. The bad news is that it's about two months before Joe Biden takes over, and that means this administration is going to be implementing a vaccine plan."

Republican lawmakers seized upon Cuomo's remarks as evidence that he was expressing dismay that outgoing U.S. President Donald Trump, and not President-elect Joe Biden, would earn political plaudits from the rollout of the vaccine.

Sen. Rick Scott of Florida retweeted Elliott's video clip, adding: "This is everything the American people hate about politics. @NYGovCuomo is upset we’re making progress on a COVID vaccine under @realDonaldTrump. The goal should be to develop a vaccine as quickly as possible & get it distributed to as many people as possible. Period. Full stop."

In a statement, Sen. Ben Sasse of Nebraska wrote:

What on earth is Governor Cuomo talking about? This is great news and everyone - Republicans and Democrats and apolitical folks - should all be jointly thrilled about the possibility of an effective vaccine. After this nasty virus has killed hundreds of thousands of Americans and put millions out of work, it is beyond disgusting that Governor Cuomo would use a glimmer of hope for another worn-out ‘Trump is bad’ talking point. When we get a vaccine, we’re going to need all hands on deck distributing it as fast as possible - shamelessly politicizing this is dangerous and stupid."

On the floor of the Senate, Majority Leader Mitch McConnell said of Cuomo, "I guess he would have preferred the life-saving breakthrough be delayed longer...with more American deaths in the meantime."

"Let me get this straight: Huge, potentially life-saving news for Americans is announced—COVID vaccine is 90% effective in trials. And the Left reacts by saying it's 'bad news' because it happened while Trump is in office? Unbelievable. They're beyond parody at this point."

Similar sentiments were expressed by Sen. Lamar Alexander of Tennessee, and Mississippi Gov. Tate Reeves claimed Cuomo was "jealous that the Trump administration got us here."

Cuomo's remarks also formed the basis of an article on the right-wing Blaze website, whose headline read "'Bad news'? Gov. Cuomo's response to groundbreaking COVID-19 vaccine shows just how much he REALLY cares about human lives." On Facebook, Fox News host and Trump ally Sean Hannity posted a clip from Cuomo's interview, along with the headline "Gov. Cuomo: Pfizer’s Covid Vaccine Is ‘Bad News’ as It Will Be the Trump Admin. Distributing It."

Those criticisms were premised upon misleading characterizations of what Cuomo said. Cuomo was not expressing dismay that Trump, rather than Biden, would get the credit for rolling out the vaccine. Rather, he expressed concern that the Trump administration would mishandle planning for the distribution of the vaccine whereas, in his view, a Biden administration would not.

The Blaze's and Hannity's characterization of Cuomo's remarks were also misleading on a more basic level, since they described him as saying Pfizer's announcement was "bad news," even though a cursory look at his remarks would show that he also said "The good news is the Pfizer tests look good, and we'll have have a vaccine shortly."

Cuomo's comments came during an interview with George Stephanopoulos on the Nov. 9 episode of "Good Morning America." In the interest of providing context, the following is a transcript of the relevant section of the exchange, which can also be viewed in full, below:

Stephanopoulos: We were talking yesterday about the importance of vaccine distribution in the next two months. What do you make of this news?

Cuomo: Well, it's good news-bad news, George. The good news is the Pfizer tests look good, and we'll have have a vaccine shortly. The bad news is that it's about two months before Joe Biden takes over, and that means this administration is going to be implementing a vaccine plan. The vaccine plan is very important and it's probably the most ambitious undertaken since COVID began. Just to put it in focus, we did 120 million COVID tests in this nation, over seven months — scrambling, doing everything we can. We now have to do 330 million vaccinations, maybe twice. My state does more testing than any state in the United States, we did 12 million tests. We have to do 20 million vaccines, and the Trump administration is rolling out the vaccination plan, and I believe it's flawed. I believe it learns nothing from the past. They're basically going to have the private providers do it, and that's going to leave out all sorts of communities that were left out the first time, when COVID ravaged them.

Stephanopoulos: So what needs to be done, that the Trump administration won't do, that President-elect Biden could do?

Cuomo: The Biden administration — when you deny, when you deny a problem the way Trump did, you can never solve it. And that's true in life. The Trump administration denied COVID, so they were never ready for it. There was no mobilization of the government. And they're still doing the same thing. They're going to take this vaccine and they're going to go through the private mechanism, through hospitals, through drug market chains, et cetera. That's going to be slow, and that's going to bypass the communities that we call healthcare deserts. If you don't have a RiteAid or a CVS, then you're in trouble. And that's what happened the first time with COVID. Why do we have such a disparity in the infection rate and mortality rate in COVID? Because some communities don't have the same access to heathcare. I'm sure the Biden administration is going to address that. I think his first step, saying "Let's focus on the science, let's depoliticize, testing data, listen to the science" is the exact opposite of Trump. But you have two months and we can't let this vaccination plan go forward the way the Trump administration is designing it, because Biden can't undo it two months later. We'll be in the midst of it. And I'm going — I've been talking to governors across the nation about that — how can we shape the Trump administration vaccine plan, to fix it or stop it before it does damage.

A few points are immediately clear from watching the full interview.

Firstly, Cuomo welcomed Pfizer's announcement, saying "The good news is the Pfizer tests look good, and we'll have have a vaccine shortly." Secondly, Cuomo did not say that Pfizer's announcement of positive early testing data was itself "bad news." He said the bad news was that planning for the distribution of the vaccine would be overseen by the Trump administration, rather than Biden's administration, which will take office in January 2021.

Whether or not one agrees with his reasoning or his claims, Cuomo explained that he believed the Trump administration had mishandled the distribution of COVID-19 tests, and on that basis, he believed they would do the same when planning the distribution of the vaccine. While he made it clear he would, in principle, prefer the national vaccine plan to be overseen by a Biden administration, he did not say he would therefore rather see a delay in the public receiving vaccinations. It was therefore particularly disingenuous of McConnell to suggest, as he did in the Senate, that Cuomo "would have preferred the life-saving breakthrough be delayed longer ... with more American deaths in the meantime."

Similarly, Cuomo also did not say he intended to block distribution of the vaccine itself, contrary to Elliott's false claim that he "says he’s going to work w/ other governors to 'stop' distribution 'before it does damage.'" In reality, Cuomo said "we can't let this vaccination plan go forward the way the Trump administration is designing it," and vowed to "fix" what he saw as the Trump administration's likely vaccine distribution plan, or stop it. That does not mean he would prefer that the vaccine not be distributed at all, simply that he was strongly opposed to what he saw as the likely manner in which Trump would distribute the vaccine.

Taking into account the full extent of what Cuomo said, it's clear that Republican lawmakers and right-leaning commentators grossly distorted his remarks, and falsely claimed he had said Pfizer's Nov. 9 announcement was "bad news" simply because that positive development had come during Trump's tenure in office.