Is this Crystal Methodist Church Sign in Effing, SC, Real?

This fictional town certainly seems like an interesting place to live. 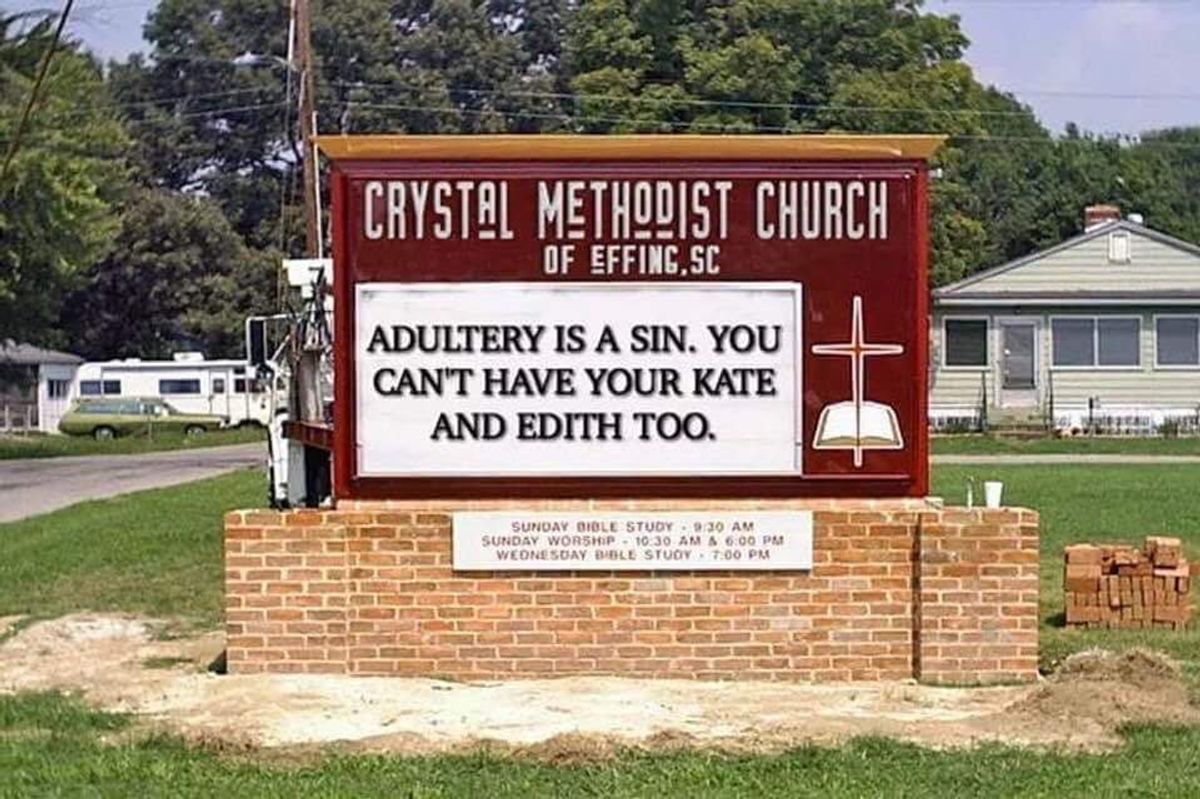 Claim:
A photograph shows a church sign outside of Crystal Methodist in Effing, South Carolina, that reads "Adultery is a sin. You can't have your Kate and Edith too."
Rating:

In March 2019, we started receiving queries about a church sign supposedly found outside of the Crystal Methodist Church in Effing, South Carolina, reading, "Adultery is a sin. You can't have you Kate and Edith Too": This image racked up tens of thousands of shares as it was posted by a variety of Facebook pages, such as "IntelligentRedneck" and "Completely Offensively," but it originated on the "Crystal Methodist Church of Effing SC" Facebook page in February 2019.

For starters, there simply is no city of "Effing" in South Carolina. This fictional town serves as the backdrop for humorous posts from "The Crystal Methodist Church of Effing SC" Facebook page, as well as its apparent sister Facebook page, "Effing SC."

We have not been able to locate the original source of this church sign, and when we inquired about the matter with the The Crystal Methodist Church of Effing SC," they told us that the church was "built originally in the 1960s by the congregation at the time and was converted sometime in the late 80s. It is being updated again this year." While we applaud this Facebook page's commitment to the joke, we're a wee bit skeptical of their claims.

In addition to the fact that this city simply doesn't exist, the text on this sign was clearly created with digital editing software. While this single image may pass muster, the digital trickery becomes more obvious when you realize that this Facebook page has created dozens of different versions of the same sign: When we viewed these church signs together, we noticed two very curious things. First, the exact same lighting conditions are present in each one of these images, suggesting that linear time simply does not exist in the fictional city of Effing, South Carolina. Second, while the wording on this sign clearly changes from day to day, it appears that nothing else in this town ever moves. The pile of bricks next to the sign, as well as the RV in the background, have been in the same spot since this Facebook page posted their first "Crystal Methodist Church" sign in May 2018: