Repeating something countless times over the course of a year does not actually make it a fact. 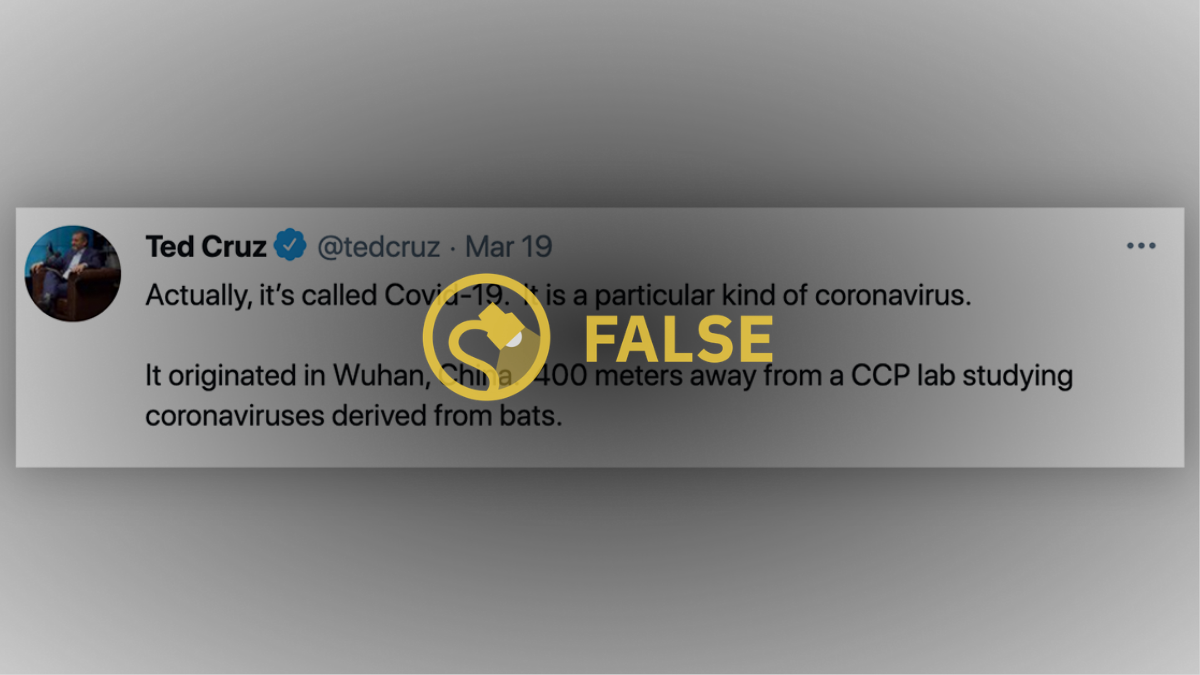 Claim:
A "CCP lab studying coronaviruses derived from bats" is located 400 meters away from the Huanan seafood market in Wuhan, China, that saw some of the earliest cases of COVID-19.
Rating:

The notion that a laboratory involved in coronavirus research exists in extreme proximity to the Huanan seafood market that was originally implicated in the initial spread of COVID-19 has been repeated ad nauseam since the start of the pandemic, despite its being demonstrably false. The claim was most recently made on Twitter by U.S. Sen. Ted Cruz, who wrote:

"[Covid-19] originated in Wuhan, China. 400 meters away from a CCP lab studying coronaviruses derived from bats."

Proponents of a suite of controversial hypotheses asserting that SARS-CoV-2 escaped from a lab in Wuhan implicate a biosecurity level 4 lab (BSL-4) housed on the campus of the Wuhan Institute of Virology. Cruz himself has explicitly blamed this laboratory for a potential leak. On an episode of his podcast "Verdict with Ted Cruz" titled "The Wuhan Coverup," for example, he describes "a shocking new revelation about the Wuhan Institute of Virology."

The Wuhan Institute of Virology is not 400 meters away from the Huanan seafood market. It is roughly 26,912 meters (or about 17 miles) away. The confusion stems from a so-called "scientific paper" (self-published in February 2020 on the academic networking site Research Gate with no peer review) that asserted with deeply flawed reasoning that "Wuhan Disease Prevention and Control Center" was involved in bat coronavirus research. The authors of that paper pointed to a building identified on Google Maps as the "Wuhan Jianghan Disease Prevention and Control Center" in close proximity to the market as a potential lab-derived source of the COVID-19 pandemic.

The video below shows the relative locations of the Huanan seafood market, the Wuhan Jianghan Disease Prevention and Control Center, and the Wuhan Institute of Virology:

A quick note on using Google or Bing maps to identify locations in China: The satellite imagery and the map data do not line up. This is the result of draconian policies that require anyone mapping anything in China to license a proprietary coordinate system owned by the government. For this reason, we used only satellite images, guided by existing maps and on-the-ground photos, to generate the above video in Google Earth. The location identified as the "Wuhan Jianghan Disease Prevention and Control Center" is based on a map contained in the February 2020 self-published paper, and Snopes cannot confirm the accuracy of the identification of that building.

The paper, which was almost immediately deleted by its authors, asserted that the Wuhan Disease Prevention and Control Center partook in bat coronavirus research based on the fact that a man named Jun-Hua Tian is employed by the "Wuhan Center for Disease Control and Prevention" and because he researches viruses in bats.

While this was a factual observation, as we discussed in an April 2020 investigation, it is not evidence that his — or any — work on bat viruses physically took place at the "Wuhan Disease Prevention and Control Center," near the market.  For one thing, there are at least eight "Wuhan Disease Prevention and Control Center" locations in the Jianghan district of Wuhan (where the market is located) alone. For another, Tian's work on these projects has been done in collaboration with the Wuhan Institute of Virology — a lab actually constructed for the purpose of analyzing such viruses that would have, therefore, handled any sample storage or experimentation.

Because the "CCP lab studying coronaviruses derived from bats" is located 17 miles away from the Huanan market, however, the claim that it is located "400 meters" away is "False."