Images from Ukraine in 2022 have reminded many of the scenes during the start of the Holocaust in 1941. 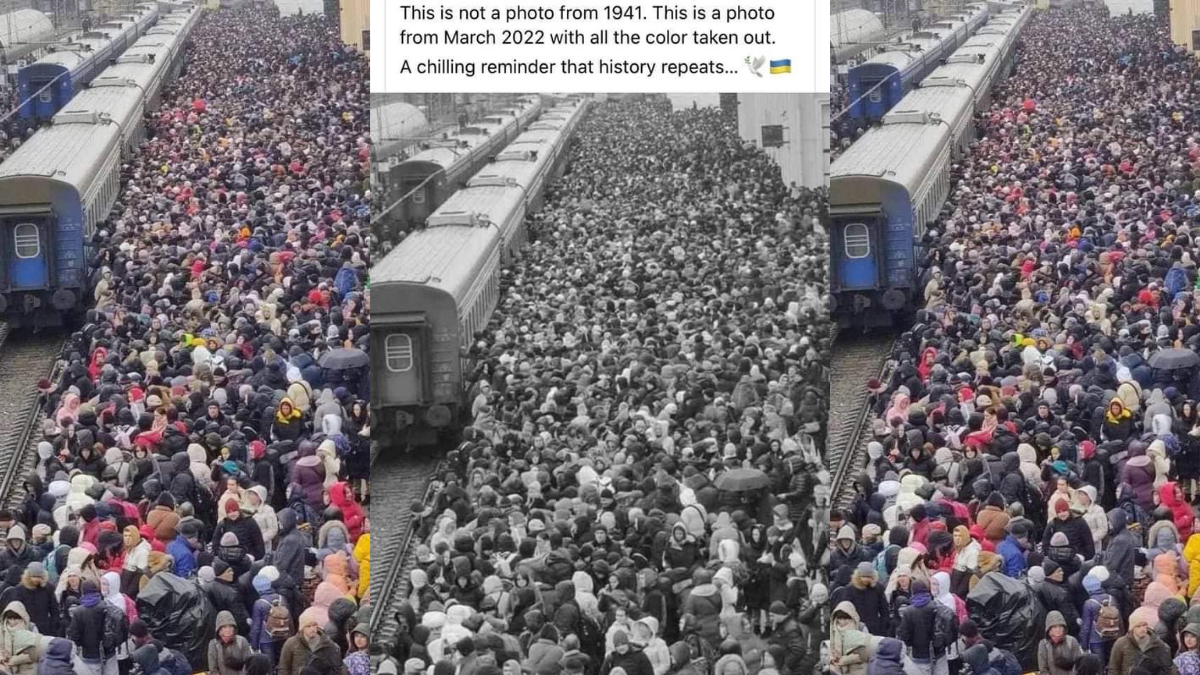 Claim:
A 2022 photograph shows a crowded train station as thousands of Ukrainians attempted to flee after Russia's invasion of the country.
Rating:

In the days after Russia launched a deadly invasion on Ukraine, a photograph started circulating on social media that supposedly showed hundreds people on a crowded train station platform attempting to flee the country. The photograph was frequently shared with a caption stating: "This is not a photo from 1941. This is a photo from March 2022." This photograph was truly taken in early 2022 during Russia's invasion of Ukraine.

The caption accompanying the photograph appears to compare the current situation in Ukraine to the millions of people across Europe who were forced to flee Nazi aggression during World War II and the Holocaust. In the BBC's March 2022 coverage of Ukraine's modern-day refugees, they noted that the scene was reminiscent of what these people's grandparents experienced roughly 80 years ago:

On the westbound platforms, the refugees huddle in crowded corridors and stairwells hoping to board trains that will take them to safety in Poland, Hungary or Slovakia.

Among them are groups of Roma Gypsies who come from Kharkiv, where Russian shelling is killing civilians. Like everybody else they fled only with what they could carry, an assortment of holdalls and rucksacks.

In Lviv, these scenes summon up the restive ghosts of Europe's past. The city is filled with people whose parents or grandparents experienced genocide and totalitarianism in the last century. Tens of thousands of Roma were murdered by the Nazis during World War Two.

The above-displayed photograph was taken in Kharkiv, Ukraine, as millions of people were attempting to flee the country. Tim Mak, NPR's investigative correspondent in Ukraine, was one of the first to share the picture online. Mak said the news organization received the picture from an aide to the Ukrainian Ministry of Internal Affairs:

Here's another report from NBC News:

NBC News reported that more than 2 million people have fled Ukraine following Russia's invasion. It's unclear how many passed through this specific train station.

The exact death toll in Ukraine is also hard to pin down. A U.S. official told CBS News on March 10, about two weeks after Russia invaded Ukraine, that thousands of Ukrainians civilians and soldiers had already been killed.

Thousands of Ukrainian civilians and soldiers are also believed to have been killed over the past two weeks. The U.S. official said 2,000-4,000 Ukrainian troops have been killed. In the city of Mariupol — where an airstrike hit a maternity hospital on Wednesday — some 1,200 people have died over the course of Russia's nine-day siege of the city, Ukrainian President Volodymyr Zelensky's office said, according to The Associated Press.

A similar rumor was circulated online about Ukraine's Odessa Opera and Ballet Theater. That rumor featured two photographs, one taken recently in 2022 and another taken during World War II:

These photographs are both real and taken during the referenced times. Another photograph showing defense measures outside of the Odessa Opera House in Ukraine during World War II can be seen here. Several news reports have featured the defensive measures outside of this historical building in 2022, including the following video of Odessa opera singers taking a moment to sing in between filling up sand bags and handing out rations:

Up to 6,000 Russians May Have Been Killed in Ukraine so Far, U.S. Official Estimates. https://www.cbsnews.com/news/ukraine-russia-death-toll-invasion/. Accessed 11 Mar. 2022.