Did NY Times Publish What Some Said Was a 'Swastika-Shaped' Crossword Puzzle?

The puzzle's designer said that he was simply going for a "fun whirlpool shape." 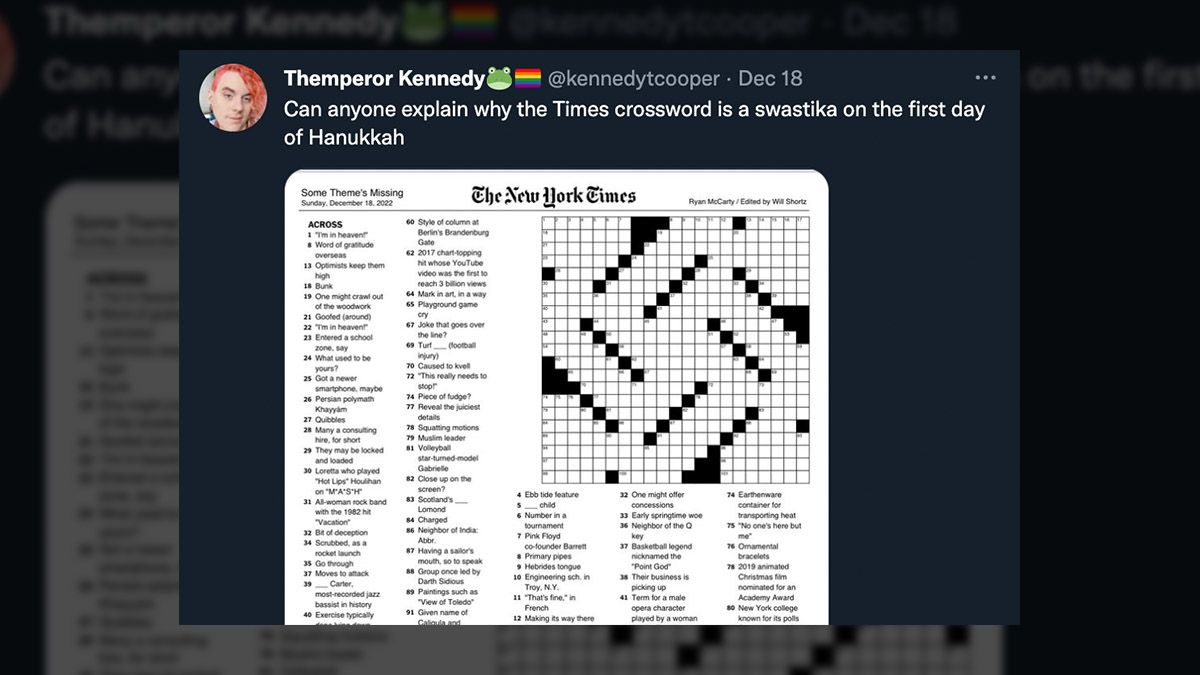 Claim:
An image of a crossword puzzle that somewhat resembled a swastika shape was printed by The New York Times on the first night of Hanukkah in December 2022.
Rating:

By email, a spokesperson for The New York Times said: "This is a common crossword design: Many open grids in crosswords have a similar spiral pattern because of the rules around rotational symmetry and black squares."

On Dec. 18, 2022, we received reader mail that asked if The New York Times really had printed, on the first night of Hanukkah, a crossword puzzle with a design that somewhat resembled a swastika shape. Readers asked us about the subject after seeing what was purported to be an image of the crossword puzzle that was posted on social media.

One tweet that received thousands of retweets and likes read, "Can anyone explain why the Times crossword is a swastika on the first day of Hanukkah?"

A picture of the print edition of the Times was shared on Facebook:

It's true that this image showed the Sunday crossword puzzle from The New York Times, and that it did somewhat resemble a swastika shape.

By email, a spokesperson for The New York Times shared the following statement: "This is a common crossword design: Many open grids in crosswords have a similar spiral pattern because of the rules around rotational symmetry and black squares."

When the crossword puzzle was first published, the design was described on the Times' website by editor Will Shortz. Shortz said that the creator of the puzzle simply "started this grid in the middle and worked his way out":

Ryan McCarty of Washington, D.C., is a principal consulting manager at a company specializing in data analytics for clients in the federal government. He is also a baritone in several vocal ensembles. Weekend solvers will be very familiar with his name, even though this puzzle is Ryan's Sunday debut. This is his 23rd Times puzzle, and nearly every one has been a Saturday themeless construction.

He started this grid in the middle and worked his way out, stirring in a heap of fresh, lively vocabulary, including 20 debut entries.

McCarty also initially noted that the idea behind the crossword puzzle was simply to create a "fun whirlpool shape":

Thrilled to have my first Sunday puzzle in The Times! This grid features one of my favorite open middles that I've made as it pulls from a variety of subject areas. I had originally tried to make it work in a 15x15 grid but then decided to expand the grid out to a Sunday-size puzzle with a fun whirlpool shape. Hope you enjoy!