A personal account concerning the spread of COVID-19 in Italy went viral in March 2020. 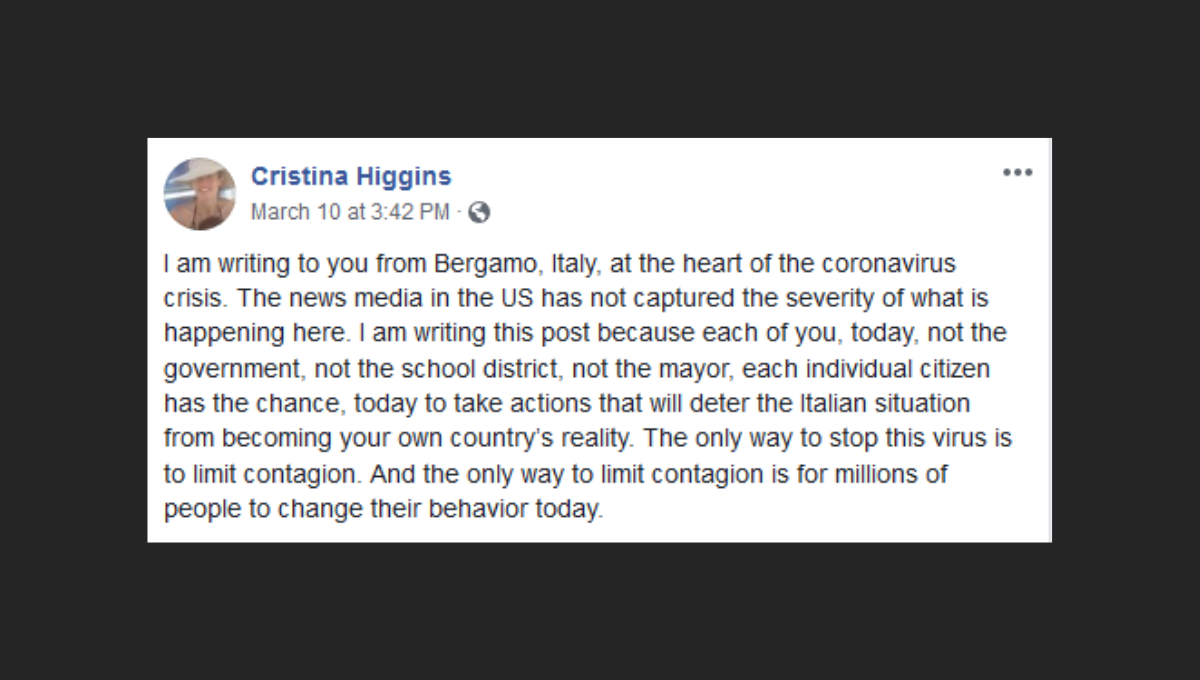 Claim:
Cristina Higgins authored a personal account about the spread of COVID-19 in Italy.
Rating:

On March 10, 2020, Facebook user Cristina Higgins posted a message from Bergano, Italy, or as she described it the "heart of the coronavirus crisis." Higgins' post described how the country was dealing with the spread of COVID-19, the disease caused by the new coronavirus, and claimed that "the news media in the US has not captured the severity of what is happening here."

Many Snopes readers inquired about Higgins' post, which racked up more than a half-million shares within two days, so we have reproduced it in full at the end of this article, and we'll address a few of the claims made in the post.

But first let's verify that Higgins is the author of this post and that she truly lives in Italy.

Attribution on the internet can be a difficult thing. Facebook posts like this are often copied, pasted, and spread across social media where they get attributed to a variety of sources. An unattributed version of this post, for instance, was viewed more than 100,000 times after it was posted to Imgur.

Higgins does appear to be the true author of this post, however. NBC News contacted her after the post went viral and reported that she is an American currently living in Italy.

For nearly two weeks, Cristina Higgins, an American who lives in Italy, has traveled no farther from her apartment building than the driveway. Her days begin at the breakfast table with her husband and three children before the kids log online to do their schoolwork from home. The family spends their evenings playing Monopoly in their apartment.

"We have friends who are getting sick. It's very stressful," Higgins told NBC News over the phone from her home in Bergamo, where she, like everyone else, is under government-ordered home isolation, even though she and her family are not sick. "I am nauseous all day long, because every time I look at the news or talk to somebody else, something terrible has happened. And I don't know what's going to happen next."

Higgins said she rarely posts to Facebook but felt it was important to convey to those outside of Italy who can't comprehend how bad the situation is that they need to do whatever they can to not pass on the disease.

Higgins appears to be the true author of this post. Furthermore, the claims she made in the post, generally speaking, are accurate. Let's examine a few of her assertions.

While COVID-19 has been compared to the flu and has similar symptoms, Anthony Fauci, the director of the National Institute of Allergy and Infectious Diseases, told the House Oversight and Reform Committee that COVID-19 was at least "10 times as lethal" as the seasonal flu.

Here's a clip of Fauci's testimony:

We transcribed the relevant portion below:

For the practical understanding of the American people, the seasonal flu that we deal with every year has a mortality of 0.1%. The stated mortality overall of this [coronavirus], when you look at all the data including China, is about 3% [...]. If you count all the cases of minimal symptomatic or asymptomatic infection, that probably brings the mortality rate down to 1%. Which means that it is 10 times more lethal than the seasonal flu.

Is Italy Under Lockdown?

In general, yes. Italy has restricted public gatherings and travel for all 60 million of its residents. Nonessential businesses such as restaurants and bars have been closed, and the country is encouraging social distancing. Food stores and pharmacies are about the only businesses that will be allowed to stay open until restrictions are lifted.

Italy has imposed sweeping nationwide restrictions on travel and public life, a desperate attempt to contain the coronavirus outbreak that looks set to plunge the world's eighth largest economy into a steep recession.

The measures announced late Monday include travel restrictions on 60 million residents, a ban on public events, the closure of schools, movie theaters, museums and gyms, and limits on opening hours for restaurants, bars and shops.

The government took action as the number of deaths caused by coronavirus reached 463 and infections topped 9,000, more than double the number reported in China as a share of the population. The restrictions are in place until at least April 3.

Are Intensive Care Units in Italy Operating at Capacity?

One major concern about a viral outbreak is that there won't be enough beds and supplies to treat sick people. Although Italy may have adequate space to treat people during a normal year, hospitals can become overwhelmed when there is a surge of patients. That is currently the case in Italy.

The coronavirus has overwhelmed the country’s health system, particularly in the north. More than 80 percent of the hospital beds in Lombardy, the hardest-hit province, are being occupied by coronavirus patients, according to Bloomberg. Intensive care units are overloaded while elective surgeries have been canceled in the process to free up beds. Stories abound on social media about doctors struggling to meet their patients’ needs, even rationing care.

Can Young People Get the Coronavirus?

Although older generations are certainly at higher risk of dying from this disease, young people are not immune to COVID-19. The CDC writes that "infections in children have been reported, including in very young children." While many younger people may have a strong enough immune system to survive the disease, they can catch it, carry it, and spread it to more people.

Most people who are young or healthy and who contract the virus don’t get severely ill. But if you have the virus, even if you don’t get that sick, you might come into contact with people who are more at risk — and pass the virus to them. That’s why it’s so important to stay home if you’re not feeling well. Minimizing the number of people each sick person infects is low-tech, but it’s the best way to slow the spread of a disease like COVID-19. It’s the goal of policies like school closures and event cancellations and why people who might have been exposed to the illness are asked to isolate themselves.

I am writing to you from Bergamo, Italy, at the heart of the coronavirus crisis. The news media in the US has not captured the severity of what is happening here. I am writing this post because each of you, today, not the government, not the school district, not the mayor, each individual citizen has the chance, today to take actions that will deter the Italian situation from becoming your own country’s reality. The only way to stop this virus is to limit contagion. And the only way to limit contagion is for millions of people to change their behavior today.

If you are in Europe or the US you are weeks away from where we are today in Italy.

I can hear you now. “It’s just a flu. It only affects old people with preconditions”

There are 2 reasons why Coronavirus has brought Italy to it’s knees. First it is a flu is devastating when people get really sick they need weeks of ICU – and, second, because of how fast and effectively it spreads. There is 2 week incubation period and many who have it never show symptoms.

When Prime Minister Conte announced last night that the entire country, 60 million people, would go on lock down, the line that struck me most was “there is no more time.” Because to be clear, this national lock down, is a hail mary. What he means is that if the numbers of contagion do not start to go down, the system, Italy, will collapse.

Why? Today the ICUs in Lombardy are at capacity – more than capacity. They have begun to put ICU units in the hallways. If the numbers do not go down, the growth rate of contagion tells us that there will be thousands of people who in a matter of a week? two weeks? who will need care. What will happen when there are 100, or a 1000 people who need the hospital and only a few ICU places left?

On Monday a doctor wrote in the paper that they have begun to have to decide who lives and who dies when the patients show up in the emergency room, like what is done in war. This will only get worse.

There are a finite number of drs, nurses, medical staff and they are getting the virus. They have also been working non-stop, non-stop for days and days. What happens when the drs, nurses and medical staff are simply not able to care for the patients, when they are not there?

And finally for those who say that this is just something that happens to old people, starting yesterday the hospitals are reporting that younger and younger patients – 40, 45, 18, are coming in for treatment.

You have a chance to make a difference and stop the spread in your country. Push for the entire office to work at home today, cancel birthday parties, and other gatherings, stay home as much as you can. If you have a fever, any fever, stay home. Push for school closures, now. Anything you can do to stop the spread, because it is spreading in your communities – there is a two week incubation period – and if you do these things now you can buy your medical system time.

And for those who say it is not possible to close the schools, and do all these other things, locking down Italy was beyond anyone’s imagination a week ago.

Soon you will not have a choice, so do what you can now.