Did Crisis Actors Make a Propaganda Video in Ukraine?

This claim definitely involves propaganda, but not in the direction a propagandist would have you believe. 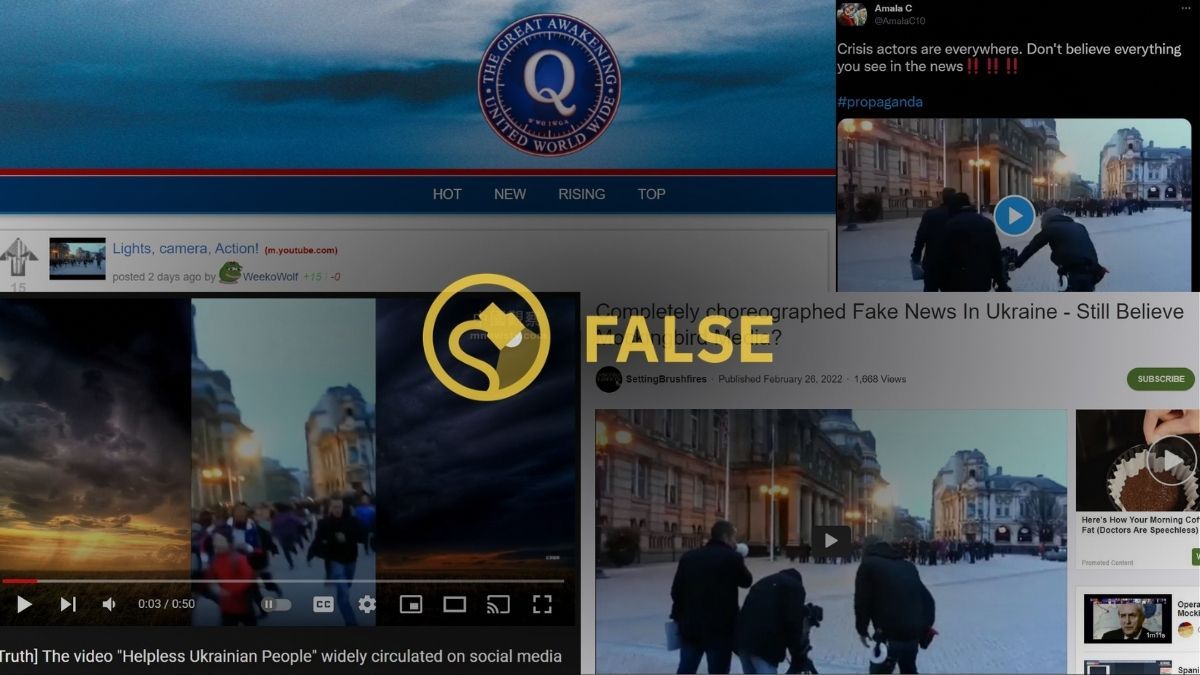 In February 2022, Russian propagandists went into overdrive in an attempt to justify their unprovoked attack on Ukraine. They claimed that Ukraine was run by Nazis (false), that Ukraine was committing genocide on its own people (false), and that Russia was attacking biolabs to prevent "COVID-2" (false).

Another line of disinformation attempted to downplay violence in Ukraine. This was largely done when people posted photographs and videos that supposedly showed "crisis actors," or people pretending to be in crisis there. A video of a camera crew filming people running through the street, for example, was posted to Bitchute (a video platform known for hosting far-right, conspiratorial, and hate content) along with the title  "How to Make a Propaganda Video?" and the hashtags #UKRAINE #RUSSIA and #PROPAGANDA. Rumble, another video platform known for hosting far-right content, posted this video under the caption "completely choreographed Fake News In Ukraine - Still Believe Mockingbird Media?" On "TheGreatAwakening," a conspiratorial website dedicated to the debunked QAnon conspiracy theory, this video was shared with the caption "Lights, Camera, Action!" and on Twitter it was shared as if it showed "crisis actors" filmed "in the middle of the 'massive and scary' Russian invasion." Was this Video Filmed in Ukraine?

This video was originally posted in 2013 and shows a behind-the-scenes look at the making of "Invasion Planet Earth" (originally titled "Kaleidoscope Man"), a sci-fi adventure movie about an alien invasion. The above-displayed scene was filmed in Birmingham, England, not Ukraine. But we have not found a single post from a genuine news outlet that presented this footage as if it were real. The "news outlet" included the above-displayed screenshot is a weeks-old Twitter account, @mightyfarooz200, that has no apparent connections to any credible news outlet.

How to Make a Propaganda Narrative

This video was not filmed in Ukraine during Russia's invasion of the country. It does not show crisis actors and it was not shared as if it were genuine footage of Russia's invasion as reported by credible media news outlets. However, this is still a good example of propaganda, just not in the way that it's being presented online.

This footage was widely circulated on social media with one of two claims: First, that it showed Ukrainian "crisis actors" filming a propaganda video, and second that the news media was using miscaptioned footage to misrepresent the situation in Ukraine. Neither of these claims were true.

Hinton, Alexander. “Putin’s Claims That Ukraine Is Committing Genocide Are Baseless, but Not Unprecedented.” The Conversation, https://theconversation.com/putins-claims-that-ukraine-is-committing-genocide-are-baseless-but-not-unprecedented-177511. Accessed 28 Feb. 2022.