Claims that newly-arrived asylum seekers are causing a crime wave in Sweden are not supported by data or local officials. 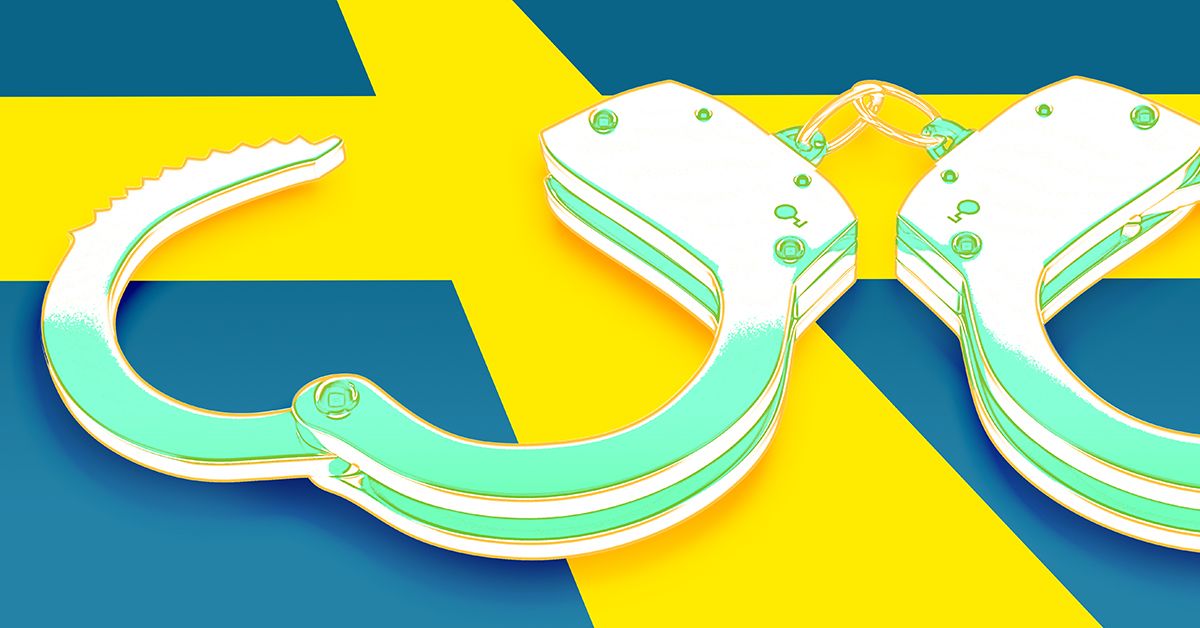 Claim:
Recently-arrived asylum seekers are perpetrating the majority of crime in Sweden.
Rating:

This is Part II of a three-part series on crime in Sweden. Read Part I:"Is Sweden the 'Rape Capital' of Europe?"

Recently, conspiracy and tabloid web sites have been filled with horror stories about refugees in Sweden, accusing them of everything from rape and murder to sheer bad manners. Writing for the British tabloid The Daily Mail on 3 March 2017, Katie Hopkins described the situation in breathless terms:

The fears are real. The areas migrants inhabit have become sink suburbs, riddled with no-go zones, even for the police, where hand-grenade attacks are the accepted norm, women stay indoors, and the ambulances and fire engines need police escorts. God help any good people forced to live here ...

World leaders such as British politicians Nigel Farage and U.S. president Donald Trump have claimed that Sweden is now overrun with crime because the country took in about 193,000 asylum seekers in 2015 and 2016.

However, most violence in Sweden can’t be linked to asylum seekers. Instead, economic stagnation in immigrant communities that formed decades ago has resulted in intergenerational poverty, which has in turn fueled the proliferation of street gangs. Data provided by Statistics Sweden show, for example, that unemployment is higher and education levels lower in Herrgården, which is thought of as the most dangerous part of Rosengård, a neighborhood in Malmö.

The city of Malmö is often the subject of news reports about the supposed Swedish crime wave. Deputy Mayor Nils Karlsson told us that crime in these areas stems from Sweden’s failure to integrate previous generations of immigrants. Since the vast majority of the ethnically-Swedish population is college-educated, employers usually choose people with academic degrees over those without degrees, even for entry-level positions — in short, the same disparities that fuel crime all over the world:

People with a background outside Europe have a much larger unemployment rate than people like me. In some areas of Malmö, the unemployment rate is 40 percent, while in other parts it’s about 1 percent. That is not a well-integrated society. If you’re growing up and your parents don’t have a job and don’t have much money, of course you’re not going to see that many alternatives for yourself. The key to stopping crime is getting people to work. The problem here is the level of education for the people coming here doesn’t match the job market anymore.

Sweden's governmental agency that conducts crime research, Brå, has not performed a study that takes into account the nationality of crime suspects since 2005, as the law currently prevents them from tracking the national origin of crime suspects and victims. In 2005, they found that people with non-Swedish backgrounds were 2.5 times more likely to be crime suspects, but Brå pointed to a Stockholm University finding that economic opportunity and social mobility play a decisive role in criminal activity:

In the empirical analyses we follow all individuals who completed compulsory schooling during the period 1990 to 1993 in the Stockholm Metropolitan area (N=66,330), and we analyze how background factors related to the family of origin and neighborhood segregation during adolescence influence the gap in recorded crimes, which are measured in 2005. For males, we are generally able to explain between half and three-quarters of this gap in crime by parental socioeconomic resources and neighborhood segregation. For females, we can explain even more, sometimes the entire gap. Resources in the family of origin appear to be the strongest mediator. In addition, the residual differences are virtually unrelated to immigrants’ country of origin, indicating that ‘culture’ or other shared context-of-exit factors matter very little in generating the gap.

(The term "context-of-exit" means the circumstances under which migrants left their home country).

The experts we interviewed all noted that critics are conflating recently-arrived asylum seekers with other populations when they talk about "migrant crime." Many of the persons committing crimes in areas such as Malmö or the Stockholm suburb of Rinkeby are young people who were either born in Sweden to immigrant parents or were born outside the country but arrived in Sweden at a young age.

Joakim Palmkvist, a long-time crime reporter for the Swedish newspaper Sydsvenskan, which is based in Malmö, explained that there is no massive new crime wave being perpetrated by newly-arrived refugees in Sweden’s suburbs — instead, crime today is an iteration of gang violence that has been going on in the country since the 1990s, starting with American exports such as the motorcycle gangs Hell's Angels and Bandidos.

Sitting in a small meeting area in Sydsvenskan's newsroom, Palmkvist explained that the motorcycle gangs were the "first wave" of gang organization in Sweden. They set the stage for the "second wave," which to a large extent consisted of the children of people who fled the Balkan war. The current spate in violence in these areas is the result of a power vacuum in the organized crime community and the younger "third wave” — children of immigrants who have lived in Sweden most of their lives — who are now trying to establish themselves.

What sets the so-called third wave apart from earlier waves is its chaotic nature, loose structure, and disconnection from wider society. The bar of what can spark a homicide is also lower than it has ever been; a wrong look or a leer at a girlfriend could lead to a shooting, Palmkvist said:

The second wave, a couple have been killed off, trickled away, retired, some have gone to prison as well ... The third wave is coming into that vacuum and they are fighting amongst each other to see who will be the main man.

Crime researcher Johanna Olseryd pointed out that Brå’s annual crime survey showed that homicides aren’t increasing, but they are changing in nature:

Less people are being victimized in the general population, but then we have a small group of people who are victimized repeatedly... Also when it comes to lethal violence, we haven’t seen an increase there but we have seen an increase in the proportion of cases that are perpetrated with guns. There’s been a change in the type of homicides that occur in Sweden — more guns and more homicides connected to a criminal milieu. We haven’t had an increase in total, but we can see the share of cases that have occurred with guns in these areas have increased.

Police in Malmö are currently handling 14 homicides, a number that has overwhelmed local investigators, said Erik Jansåker, police chief for Malmö's southern areas. One of the most rattling of the recent deaths was that of 16-year-old immigrant Ahmed Obaid, himself an immigrant. No one knows for certain why he was targeted in Rosengård while standing by a bus stop. A bouquet of yellow flowers still rested against a light pole at the bus stop on 16 March 2017, two months after his shooting.

Officer Johannes Schultz, who patrols the neighborhood on foot, told us that Obaid's shooting death sent a chill through the community:

That changed the whole society in Rosengård. Even 17, 18 year-olds say they are afraid to go out when it’s dark now. Because he got shot and no one knows why. He was not a criminal. There have been less people out in the evenings than it was before that. But people tend to forget and it’s getting warmer, so it’s easier to be outside.

Karlsson said that while the country's crime is historically low he can understand the fear that the violence can engender, as when it does happen, it tends to be high profile:

Despite us having taken in many immigrants during the 1990s when we had the Balkan crisis up to now, even with that immigration, the level of crimes have decreased. But Sweden is a small country and Malmö is a small city, and if someone gets shot many people will know that person. I can understand why people are scared.

Yet, Karlsson, said, crime in Sweden has been alternately sensationalized and ignored. He told us that both liberals (who think of Sweden as a paradise) and conservatives (who say it is overrun with violence) have both gotten it wrong:

Saying everything is great is not helping because you have to say there is a problem before you actually fix it. Sweden has been quite good at spreading the reputation about how perfect we are, which of course now backfires. But we used to have and still do have a low crime rate ... since the early 1900s.

Research from Brå backs him up — crime data show a general downward trend since 2005:

The proportion exposed to one or several 'crimes against person' was 11 percent in 2005. Subsequently, the proportion gradually decreased, and then stabilized at a level of around 9 percent. The last three years the trend is not as clear. In 2013 there was a rise to 11 percent, which was supposed to be temporary because the following year showed a decline to 9 percent. In 2015, however, the proportion is again 11 percent. The year-to-year variations in recent years is therefore large.

Hällsten, Martin. "Crime as a Price of Inequality? The Delinquency Gap Between Children of Immigrants and Children of Native Swedes."   Stockholm University. 4 March 2011.

Hopkins, Katie. "The Swedish Town Where Migrant Gangs Have Killed Multiculturalism Stone Dead and Laugh at Laws They Despise and Defy."   The Daily Mail. 2 March 2017.

Government Offices of Sweden. "Facts about migration and crime in Sweden."   23 February 2017.