The Mickey Mouse costume has gone through quite a few changes over the years. 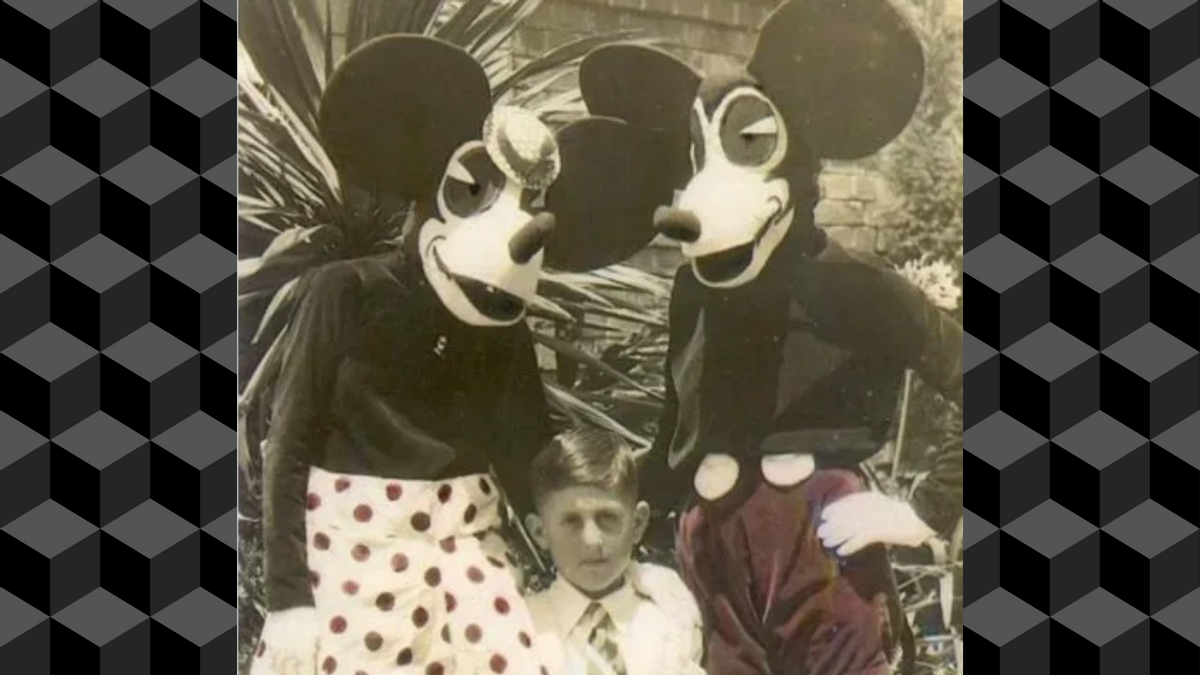 Claim:
A photograph shows an early version of costumes for Mickey Mouse and Minnie Mouse.
Rating:

This is a genuine photograph of a Mickey Mouse and Minnie Mouse costume.

This photograph was not taken at Disneyworld, and these costumes were not made by the Walt Disney Company.

In November 2020, as fans of the Walt Disney Company celebrated Mickey Mouse and Minnie Mouse's 92nd birthday, a picture supposedly showing a "creepy" Mickey Mouse costume from the early days of Disney started to circulate on social media: This is a genuine photograph of an early Mickey and Minnie Mouse costume. However, this does not show a Disney fan posing with an official mascot at Disneyland or Disneyworld, as some may think, and the Walt Disney Company did not design these costumes.

The character of Mickey Mouse was created by Walt Disney in 1928, and as the character grew in popularity, a number of costume shops unaffiliated with the Walt Disney Company created their own papier-mâché versions of a Mickey Mouse costume. The above-pictured costumes were likely taken in the early 1930s.

In the time between Mickey Mouse first entering the hearts of the world in 1928, and the late 1930s became commercially available, there was a small period when crafty fans and adventurous costume shops made their own versions of a walk-around mickey mouse costume.

The earliest photos of homemade Mickey Mouse costumes look to mostly be by local family-owned costume shops which took popular characters at the time and did their best to make a familiar version to entertain kids... The faces were made of either carefully patterned fabric with hard boning or foam inside to give it some support or crafty paper mache creations with carefully sculpted finished big round signature heads and round ears.

As these costumes were not produced by any single company, the looks varied greatly from one homemade Mickey costume to the next. You can see more images of these early Mickey costumes at D23. Here's a photograph of another version from Getty Images that was taken circa 1930: Photo by WATFORD/Mirrorpix/Mirrorpix via Getty Images

When Disneyland opened in 1955, Mickey's costume still wasn't quite ready. In order to make sure that Mickey and Minnie were both present at the opening of the theme park, Disney borrowed costumes that were used for the Ice Capades.

In 1950, Mickey and Minnie appeared in the "Walt's Toy Shop" segment of Ice Capades of 1950. Five years later, Disneyland opened. However, Walt did not have the characters as they're known today readily available, so he borrowed those from the Ice Capades. The heads of these costumes had large viewpoints (spots where the performer can see out of) all over the faces of Mickey and Minnie. These holes were necessary for the skaters' vision, but they made the costumes look rather awful.

It wasn't until a few years later that Mickey's costume started to resemble the costume that you would see today in 2020 at Disneyland. Here's a video from Disney Dan that explores the history of Mickey Mouse's costume: