Is This Abandoned Train Tunnel Real?

An online advertisement promising to reveal "The Creepiest Things People Found on a Hike" got our attention. 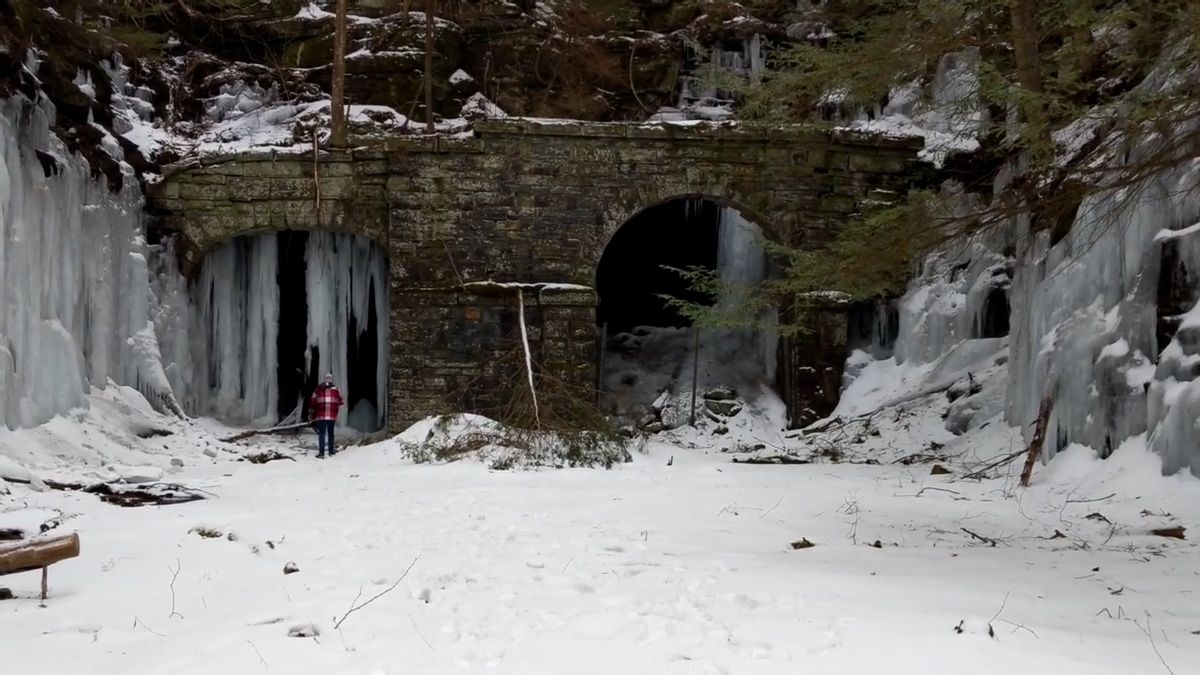 Claim:
An image shows an abandoned train tunnel from the 19th century, framed with icicles estimated to be around 15 feet (5 meters) long.
Rating:

Abandoned history can be beautiful. Urban explorers have sneaked into dead shopping malls at night. Old houses frozen in time have been found full of treasures of the past. Even this old Kmart, documented as it slowly closed down over a number of months, could be described as fascinating. So when we stumbled upon a picture that purportedly showed a "creepy" abandoned train tunnel, we couldn't resist investigating if it were real.

The picture appeared in an online advertisement below a video on a news website. It was hosted by the Taboola advertising platform and read: "The Creepiest Things People Found on a Hike." Readers who clicked the photograph were led to a lengthy slideshow story. We've often found pictures in such online advertisements to be doctored. However, in this case, it's true that the picture showed an abandoned train tunnel. However, it wasn't a still photograph. Rather, it was a screenshot that was sourced from a video published by the NEPA Trains YouTube channel:

The video was published on March 4, 2019, as was a Reddit thread with a photograph from inside the tunnel.

We reached out to the man who shot the video, who only identified himself to us as Max. He told us that the abandoned train tunnel was in Wyoming County, Pennsylvania. "I heard about that tunnel from some family, so went to check it out," he said.

He also told us he had no idea that advertisers were using a screenshot from his video:

Wow... did not know that! It's funny how they said on the website "Don’t worry, they didn’t go too far into it. That would have been super dangerous," while in fact we went all the way through it (and many many more times off camera -- it's not really that dangerous at all) and they would've known that if they watched the video they took that screenshot from!

Websites that do that slideshow thing to get more money are very annoying.

Online advertisements that lure readers to lengthy slideshow stories often have one goal: make more money on the ads displayed during the slideshow than it cost to run the initial ad in the first place. This is known as "arbitrage." For example, we recently found an advertisement that led to a story that required more than 225 clicks to reach the end.

During the video, Max described the history of the tunnel at the 4:46 mark:

This was built by Delaware, Lackawanna and Western Railroad in the 1850s. There are two tunnels. There's a shorter one and a taller one. The taller one was built later on. It wasn't originally there. It was built later on as trains started getting taller. And then eventually I guess it just wasn't able to keep up or meet demands because they shut the whole thing down, and they built another tunnel nearby that is in use, in very frequent use.

He also shared this page that contained more details:

We have previously reported on a few other claims about trains, including if placing a penny on the tracks would cause a train to derail, if a man was indeed evading police when he jumped his motorcycle over a train, and if a train car was carrying COVID-19.