Does 'Cracker Barrel' Refer to a Barrel of Whips?

Crackers can come in bags, boxes, and yes, even barrels. 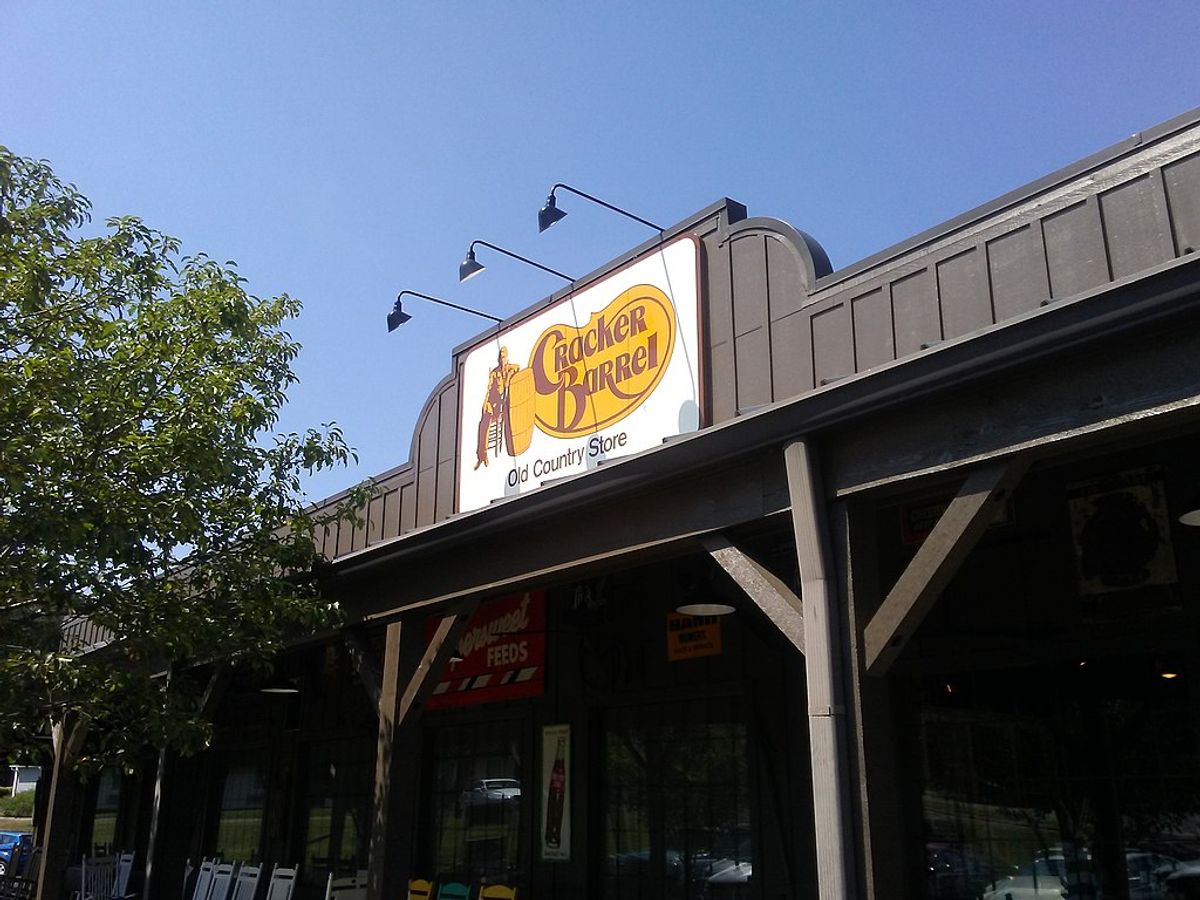 Claim:
"Cracker" was once a slang term for "whip," and the phrase "cracker barrel" — as in the name of the Cracker Barrel restaurant chain — refers to a barrel that was used to hold whips for sale in country stores.
Rating:

The origins of the pejorative term "cracker" can be traced in part back to the shortening of the term "whip-cracker."

However, the Cracker Barrel restaurant chain takes its name from the literal barrel of crackers — not whips — that were prevalent at storefronts in the late 1800s.

In February 2021, an interesting "fact" about the U.S. restaurant chain Cracker Barrel started to circulate on social media. The viral post claimed that "cracker" was a slang term for whip and that the phrase "cracker barrel" originally referred to a barrel of whips that were sold at country stores: The meme reads: "Cracker was a slang term for whip. That's why blacks called whites crackers, from the crack of the whip. A cracker barrel is a barrel that held the whips for sale at the country store. You see the whip going from the R to the K? Racism in your face!!"

There is a grain of truth to the claims made in this meme. The pejorative term "cracker" can be traced back in part to a shortening of the term "whip-cracker." However, "cracker barrel" does not refer to a barrel of whips. Rather, this is a very literal term that refers to actual barrels of crackers that were common at stores in the late 1800s.

Here's how Lexico.com explained the origins of "cracker barrel":

"Late 19th century with reference to the barrels of soda crackers once found in country stores, around which informal discussions would take place between customers."

We scanned old newspaper articles from the late 1800s and early 1900s and found several references to stores selling or purchasing soda crackers by the barrel. Here's an advertisement from 1913 for "Sunshine L-W Soda Crackers" that told customers to pass on by the "dusty, handled" crackers in the store's barrel and purchase a box of fresh crackers: 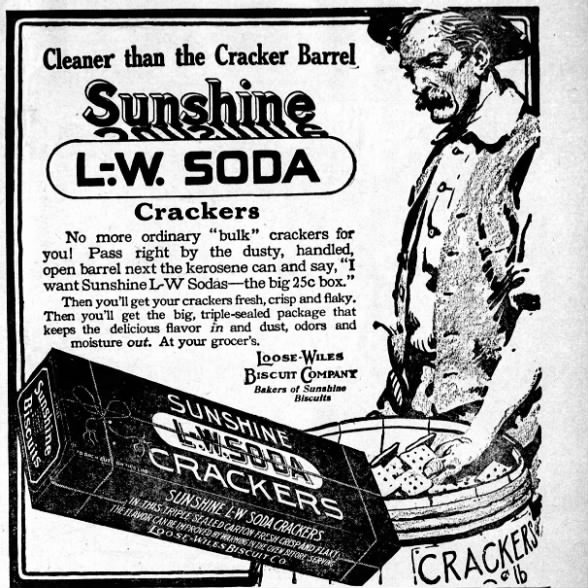 In addition to holding crackers, these barrels also served as a place for casual conversation, somewhat akin to a modern water cooler. Merriam-Webster mentioned this in their discussion of the origins of the term "cracker barrel," writing: "From the cracker barrel in country stores around which customers lounged for informal conversation."

We found quite a few interesting old newspaper clippings that show the cracker barrel as a place for philosophical musings. In 1891, for instance, the Somerset Herald started to publish various opinions that had been expressed by people gathered "around the store stoves." In some of these anecdotes, the person expressing their opinion is dubbed simply as "the cracker barrel man."

In 1905, the Allentown Democrat published an ode to these crack barrel conversations by W.D. Nesbit:

In 1903, author Paul Dodge published a short story entitled "The Courageous Abelard" in the Chicago Tribune that started with a description of how customers and store owners interacted with the cracker barrel:

Abelard stood hesitatingly beside the box of dried apples and the barrel of soda crackers. He shifted uneasily on his feed and occasionally his hand dropped into the barrel of the box and came fourth holding an apple or a cracker. These were transferred to his mouth.

Mr Watkins, the grocery man, watched the proceedings grimly, glancing over the rim of his spectacles. "Was there anything else you was a-wanting, Abelard?" he inquired, with a half concealed reference to the dried apples and the crackers. "

Nothing to speak of, said Abelard quickly.

"Thought possibly you might have forgotten some dried apples or soda crackers," said Mr. Watkins pointedly. Abelard blushed and moved with great suddenness from the vicinity of the aple box and the cracker barrel.

While "cracker barrel" refers to a literal barrel of crackers, the viral meme was right to say, at least in part, that the term "cracker" was derived from the cracking of a whip.

Jelani Cobb, a historian at the University of Connecticut, told NPR that "cracker" was a shortened version of "whip-cracker" that was used as an insult in the mid-18th century:

"Cracker," the old standby of Anglo insults was first noted in the mid 18th century, making it older than the United States itself. It was used to refer to poor whites, particularly those inhabiting the frontier regions of Maryland, Virginia and Georgia. It is suspected that it was a shortened version of "whip-cracker," since the manual labor they did involved driving livestock with a whip (not to mention the other brutal arenas where those skills were employed.) Over the course of time it came to represent a person of lower caste or criminal disposition, (in some instances, was used in reference to bandits and other lawless folk.)

The use of the word "cracker" to describe a poor or uneducated white person can also be traced back to the 1500s. Etymology Online writes that this pejorative was likely derived from the verb "crack," as in to "crack a joke" or to boast:

Southern U.S. derogatory term for "poor, white trash" (1766), probably an agent noun from crack (v.) in the sense "to boast" (as in not what it's cracked up to be). Cracker "a boaster, a braggart" is attested from c. 1500; also see crack (n.). Compare Latin crepare "to rattle, crack, creak," with a secondary figurative sense of "boast of, prattle, make ado about."

William Shakespeare even used the term "cracker" (spelled "craker") in the play "King John," writing: "What craker is this same that deafs our ears / With this abundance of superfluous breath?"

The meaning of the word has changed a lot over the last four centuries...

... It was a character trait that was used to describe a group of Celtic immigrants — Scots-Irish people who came to the Americas who were running from political circumstances in the old world.

In short:  While the origins of "cracker" can be traced, in part, back to a shortening of the term "whip-cracker," the term "cracker barrel" does not refer to a barrel of whips. "Cracker Barrel" literally refers to a barrel of crackers, a common item found in country stores in the late 1800s.

It should be noted that this claim — that "cracker barrel" was an offensive term with racial overtones — was not a new one in 2021. Eater notes that a "satirical" petition was started in 2015 to get Cracker Barrel to change its name to "Caucasian Barrel."

Update [March 26, 2021]: Revised the Claim statement to include the claim that "cracker" was once a slang term for "whip."