Was This Coyote Given a Bath After Being Mistaken for a Dog?

The critter needed a good cleaning, regardless. 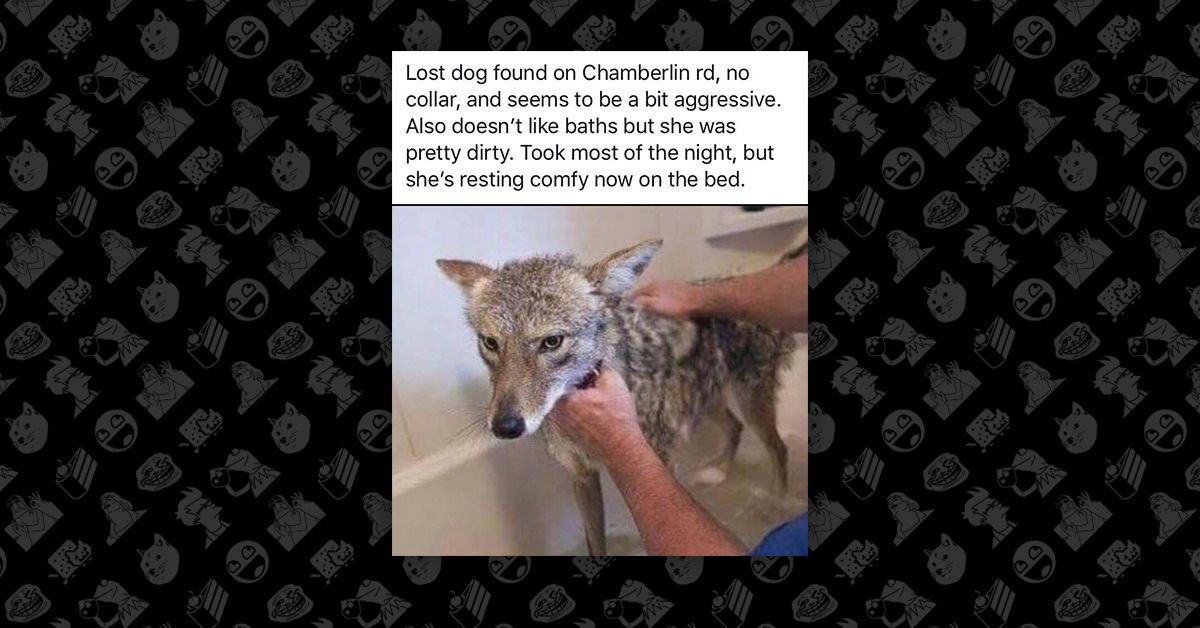 Claim:
A photograph shows a coyote being given a bath after it was mistaken for a dog.
Rating:

An image of a sad-looking coyote in a bathtub gained popularity on social media in October 2017 after someone claiming the animal had been mistaken for a dog posted it to a Twinsburg, Ohio-area Facebook group: This image has been circulating with the accompanying backstory since at least 12 October 2017. It has also been shared as if this "lost dog" had been found in Kerrville, Texas.

However, this photograph actually dates to 2014, the coyote in question did not live in Ohio, and the pictured canine was not mistaken for a dog. The picture originated with the Incredible Features photography agency and shows Wiley, a pet coyote who lives with the Hanestad family of Eau Claire, Wisconsin. Rick Hanestad said that he started caring for the coyote after its mother was killed in the Spring of 2011.

Rick launched into his story. His father and uncle farm over 1000 acres in western Dunn County. In March, 2011, his uncle allowed a neighbor to hunt turkeys on his land. The DNR promotes coyote killing 24/7 year-round, so that hunter killed a lactating female coyote. Rick said, "Patricia, I don’t like that. When I heard a female was shot in the spring, it made me sick to my stomach." He and his then 7 year-old daughter and 14 year-old son went looking for her pups. Three days later they found five crying puppies, their eyes not yet open. But he was “so scared of the DNR” that he just raked around the den to make sure it was the den of the coyote killed. When he checked again, then the fifth day since the coyote had been shot, only one pup remained alive, dehydrated and weak. Rick and his family spent the night dripping fluids down his throat. They named him Wiley.

Asked what he thought would happen, Rick said, "I figured that at about 6 months he would be so vicious, I would either let him go, or shoot him." Did he ever show any aggression to their old male lab, their children, or their horses – to anyone? "Never. He is such a sweet animal. I trust him absolutely with my 8 year-old daughter. He is best friends with our dog."

Allison Pohle, who tweeted the claim that the coyote had been mistaken for a dog, later acknowledged her mistake: