The answer to this question involves a pretty big but. 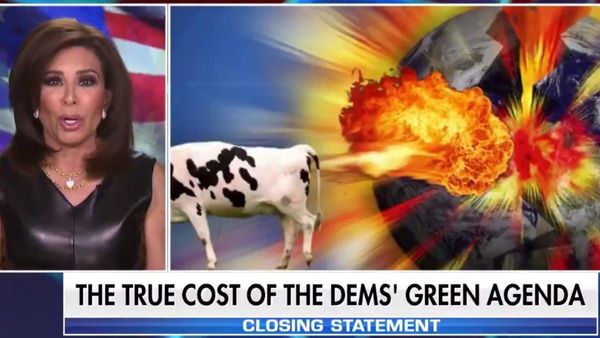 Cows produce methane, a greenhouse gas, during their digestive process. However...

Cows emit this methane primarily through burps, not farts.

According to the Environmental Protection Agency (EPA), the leading sources of greenhouse gas emissions in the financial sector are transportation, electricity production, industry, residential housing, and agriculture. When agriculture's role in the climate crisis is discussed online, the issue is often simplified down to a humorous two-word theme: cow farts.

The claim that cow farts are a leading cause of greenhouse gas emissions can be found just about everywhere and has become the butt (pun intended) of several global warming jokes. One popular meme on social media states: "Cow farts come from the dairy air." On a recent Fox News segment (above), a fiery explosion from a cow's rump is shown blowing up the world. The second thing to note is that the problem with cows comes down to their burps, not their farts.

Cows produce a lot of methane (CH4) during their digestive process, and the vast majority of this methane escapes by eructation (belching). Christopher Field of the Stanford Woods Institute for the Environment told The Associated Press:

Cows are pretty disgusting eaters, with methane coming from both ends ... But most of it comes from burping.

Of the CH4 (methane) produced by enteric fermentation in the forestomach 95% was excreted by eructation (burp), and from CH4 produced in the hindgut 89% was found to be excreted through the breath.

NASA also took a look at whether it was cow's belching or flatulence that was a bigger source of methane production. NASA wrote:

Contrary to common belief, it’s cow belching due to enteric fermentation. (“Enteric fermentation” is the digestive process of converting sugars into simple molecules for absorption into the bloodstream, which produces methane as a by-product.) However, a small percentage of methane is also produced in the cow’s large intestine and then expelled. Settling ponds and lagoons for processing manure also produce copious amounts of this greenhouse gas.

A number of potential solutions have been proposed or enacted in order to reduce the amount of methane produced by cows. For example, a 2015 study found that adding seaweed to a cow's diet could help reduce methane production. Another solution proposed by scientists in Argentina is to equip cows with belch-collecting backpacks. In April 2021, the idea of reducing beef consumption to lessen greenhouse gas emissions was a hot topic on social media as the food website Epicurious announced that it would stop publishing recipes that included beef in a "pro-planet" effort aimed at sustainability. There was also a false rumor that U.S. President Joe Biden would be mandating a 90% reduction in beef consumption.

Marine biologist Dr. Ayana Elizabeth Johnson, podcast host Alex Blumberg, and reporter Anna Ladd took a deeper dive into the farming industry's impact on climate change (and the persistent rumor that cow farts are to blame) in a recent episode of "How To Save the Planet."