Was a COVID-19 Vaccine Warehouse Set on Fire in Italy?

On social media, many people applauded this fictional act of vandalism. 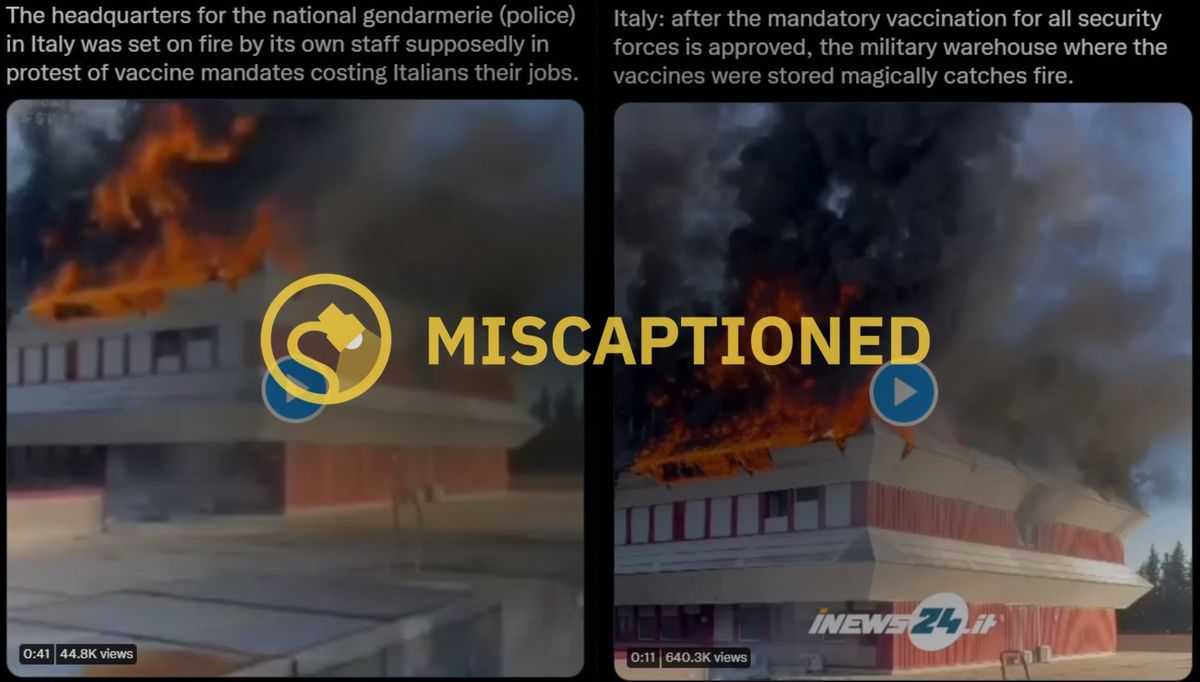 Claim:
A warehouse holding COVID-19 vaccine supplies was set on fire in Italy in protest of vaccine mandates.
Rating:

A fire broke out in a residential area of a military barracks in Italy in December 2021. This video has nothing to do with COVID-19 vaccines.

In December 2021, a video of a building fire was circulated on social media along with the claim that the blaze was intentionally set by members of the Italian military to destroy a warehouse holding COVID-19 vaccines in protest of a new mandate designed to encourage vaccinations. This video (which can be viewed below) truly shows a building fire in Italy. However, there's no evidence that this fire was intentionally set in protest of COVID-19 vaccinations. Furthermore, this is not a "military warehouse where the vaccines were stored." This fire took place in the residential area of a military barracks.

From Coincidence to Conspiracy Theory

This claim started with a simple observation of a coincidence.

This fire took place on the same day — Dec. 15 — that Italy extended its mandate for vaccinations to school staff, police and the military. Websites such as The Gateway Pundit published articles about this coincidence and claimed that it was "suspicious."

This  "suspicious" coincidence would quickly evolve into an accusation as people claimed (without evidence) that this fire had been intentionally set by members of the Italian military in protest of the COVID-19 vaccination. As this ball of misinformation continued to roll and pickup untruths, people started to falsely claim that this building was a COVID-19 vaccine warehouse.

While this video has nothing to do with COVID-19 vaccines or vaccination mandates, these claims were widely circulated on Twitter, YouTube, and Telegram by people applauding this fictional act of vandalism.

A Fire at a Military Barracks

This fire took place at the Salvo D’Acquisto carabinieri barracks in Rome. At least one soldier was injured in the blaze.

In other videos of this fire, people can be seen climbing out of windows to escape the blaze.

According to the Italian news website Rai News, the fire started inside a room that had been used as a guesthouse (not a warehouse holding a cache of COVID-19 vaccines). Military members raised the alarm and a few minutes later firefighters arrived on the scene to fight the blaze. While the exact cause of the fire is still unknown, it's likely that a short circuit was the cause.

There is considerable damage to the Salvo D'Acquisto carabinieri barracks in Tor di Quinto affected by a vast fire . When the flames have been extinguished after several hours of intervention by the firefighters, the causes now remain to be ascertained, among which the possible short circuit of an electrical appliance is not excluded. Flames and smoke that destroyed one of the dormitories where some soldiers are staying. Surprised by the fire, a young carabiniere escaped from one of the windows on the first floor of the dormitory, suffering from a bruised ankle that cost him an admission to the Sant'Andrea hospital.

According to what has been reconstructed up to this moment by the carabinieri of the investigative unit in via in Selci - who, waiting to be able to carry out in-depth inspections, carried out the first surveys and acquired the information from the firefighters - the flames broke out around 12:00 from the top floor of the building where the carabinieri dormitory of the VIII Lazio Regiment are located. Structure where there are 25 rooms in which 37 soldiers usually stay. Flames that quickly gained strength, releasing a dense column of black smoke that made fear the worst.