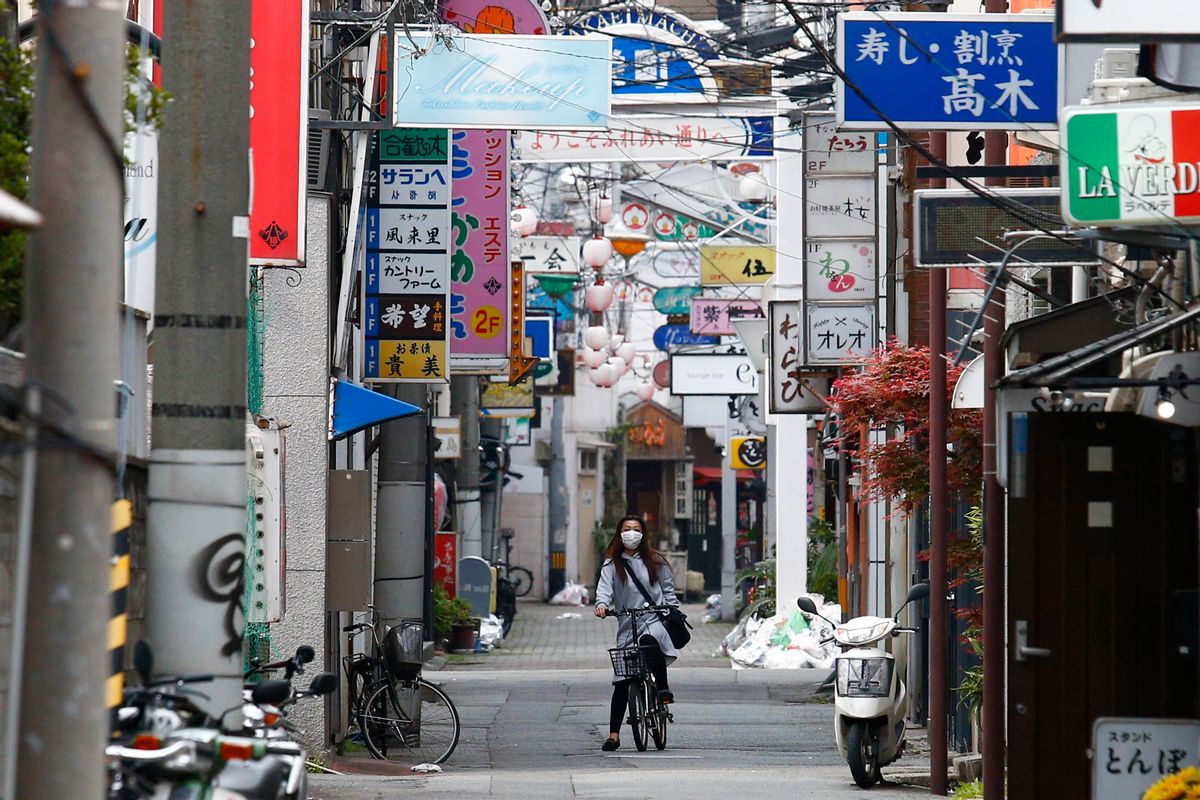 Claim:
As of April 25, 2020, the rate of people dying from the COVID-19 coronavirus disease in New York City was at least 250 times "higher" than Tokyo's — and growing with time.
Rating:

Based on available data, New York City's COVID-19 death rate (per population) far exceeded that of Tokyo, as of late April and early May 2020.

Comparing the death rates per population between Tokyo and New York City is thorny for a few reasons: The cities' populations vary depending on what geographic areas one considers, their regions' processes for COVID-19 testing are different, and it's unknown to what extent those testing practices influence government-compiled death tolls.

In spring 2020, as Americans fought over the duration of government-imposed lockdowns to limit the spread of the COVID-19 coronavirus disease, critics of the rules on social distancing drew comparisons between U.S. officials' response to the outbreak and that of leaders in other countries.

Among the critics was John McAfee, the controversial founder of the McAfee Antivirus software company and a cryptocurrency advocate (as well as 2020 U.S. presidential candidate for the Libertarian party). Aiming to call attention to what he viewed as unnecessary business closures and stay-at-home orders in the U.S. during the pandemic, he took to Twitter to highlight the rate at which people were dying from COVID-19 in New York City — the epicenter of the U.S. outbreak — compared to other major cities globally, specifically Tokyo. On April 25, 2020, he tweeted: His assertion accurately makes the point that Japan is not under compulsory lockdown to curb the spread of COVID-19. Rather, it is under a state of emergency, which empowers officials to request that residents stay home and businesses close. But —since the country's post-World War II constitution bars officials from enforcing Wuhan-style shutdowns in the name of protecting residents' civil liberties — government leaders cannot punish citizens if they don't follow the recommendations on social distancing.

The day following the viral tweet, McAfee again authored claims that were similar in nature — posts that compared New York City's pace of death to the average rate of large cities worldwide including Delhi and Mexico City — aiming to raise suspicion among his followers of the U.S. governments' rationale for, as he put it, "shutting down and destroying the economies of the world." Even Tesla and SpaceX CEO Elon Musk chimed in on the campaign, tweeting:

McAfee made several claims in his tweets, but we are focusing on whether New York's death rate was truly 250 times "higher" than Tokyo's as of April 25, 2020, and whether that pace increased over the following week.

It's important to note at the start that this is a thorny comparison for a couple reasons: The cities' populations vary depending on what geographic areas you consider, the regions' processes for COVID-19 testing are different, and it's unknown to what extent those testing practices influence government-compiled death tolls.

On May 1, Snopes reached out to McAfee to ask how he reached the calculation in the above-displayed tweet, and he answered with a phone call, emails, and direct messages on Twitter. One correspondence read: To calculate the rate at which the novel coronavirus is killing in New York City, McAfee said he considered the metro's population to be 8 million. (2018 census data show 8,398,748 New York residents.) But for Tokyo's population, he said he used a population size of 23 million — a number that apparently includes not only people living within the city's official boundaries (about 9.2 million) but also residents in surrounding jurisdictions.

That's a step where the calculating gets murky. Like McAfee, the United Nations also measures Tokyo's population as the sum of the entire metro area. But the U.N. documented more than 37 million residents as of 2018, not 23 million.

From that point, McAfee said he divided his estimates for the cities' populations by their total of COVID-19 deaths, respectively, and then compared the two death rates.

But to check his work, we first analyzed the New York City Health Department (NYC Health) criteria for counting fatalities. In March, when the department tallied the city's first handful of deaths, it only considered fatalities of people who had tested positive for COVID-19 via a laboratory-sponsored test. That meant that, initially, patients who died at home and didn't seek medical treatment were not included in the statistics. But in mid-April, the health department changed its system and also began tracking fatalities of people who had showed symptoms of COVID-19 but were never tested for it.

As of April 25, the day of McAfee's viral tweet, NYC Health reported 17,393 deaths total, including both types of fatalities: people who had officially tested positive and those who medical examiners had determined "COVID-19" or the equivalent as their cause of death. Meanwhile, the Tokyo Metropolitan Government documented less than 120 deaths.

Using those numbers and population estimates via the U.S. census and United Nations, NYC's rate of COVID-19 deaths was almost 640 times greater than Tokyo's as of April 25.

But, for several reasons, people should not take the government-compiled death tolls at face value. For one, the pace at which all local jurisdictions, whether in the U.S. or not, report deaths varies. Medical examiners can take days or weeks to process death certificates and compile that information for public records. Referring to the worldwide COVID-19 casualty count, Tim Riffe, a demographer at Germany's Max Planck Institute for Demographic Research, told The New York Times:

Whatever number is reported on a given day is going to be a gross underestimate. [...] In a lot of places the pandemic has been going on for long enough that there has been sufficient time for late death registrations to come in, giving us a more accurate picture of what the mortality really was.

Additionally, cities and countries have different criteria for administering COVID-19 tests, and residents in some locations have greater access to the testing compared to others. In Japan, officials have decided against widespread testing for COVID-19, "instead focusing on targeting clusters of infection when they appear in an effort to snuff out any further spread," The Wall Street Journal reported.

As of May 5, Tokyo had tested roughly 12,500 people for COVID-19 and about 4,700 of them were positive, according to the city's government, which is publishing its updates via an interactive web page. (For perspective, about 901,000 New York residents had been tested within roughly the same window.) In addition to excluding potential patients who are returning to the country via cruises or charter flights, the Tokyo statistics do not include people who showed mild-to-moderate symptoms — a shortness of breath, coughing or fever — and might have tested positive for COVID-19 if they had a test.

Professor Kenji Shibuya, who leads King's College London's Institution of Population Health, told BBC that from a physician's viewpoint, Japan's approach to testing makes sense: "Forget about mild cases, focus on cases with major symptoms and save lives. Focus testing on those who have symptoms."

But it also means the total number of infections in the country, including in Tokyo, are likely far greater than what public health officials are reporting and do not lend themselves to an apples-to-apples comparison with other cities, such as New York City.

"We are definitely missing a lot of asymptomatic and mildly symptomatic cases," Shibuya told BBC of the COVID-19 outbreak in Japan. "There is clearly widespread community transmission. I am very worried by this situation."

What's undetermined is to what extent the differences in testing for COVID-19 between Tokyo and New York impact their death tolls. In other words, it's unclear how many people in each city have been fatally infected with the novel coronavirus yet do not appear in government-certified mortality statistics, whether because they didn't seek medical help or didn't receive a COVID-19 test.

In the interview with Snopes, McAfee agreed: No one quite knows the exact number of infections in both places, and so accurately calculating the rate of disease is impossible. But he argued that tabulating the rate of COVID-19 deaths is a different story, since he believes government officials, especially in Japan, are tracking and publicly releasing every COVID-19 death. He said:

In Japan, if you know anything of that country, there is not a death anywhere from anything remotely resembling a lower respiratory tract infection, which is not tested (for COVID-19) ... which is why I picked Tokyo... There’s not a doctor in this world who would question the Japanese medical death number, good heavens. You know how many people investigate every death and disease in Japan? So that [issue of COVID-19 patients dying in Tokyo without being included in the public death toll numbers] cannot happen.

Now, if it’s happening in New York, that just makes it even worse — then [the rate of death] is thousands times greater than Tokyo’s. You can’t reason out of this ... numbers don’t lie.

Whether or not it "cannot happen" (as McAfee claims) that COVID-19 patients in Tokyo have died without being included in the public death toll, the disparity between the death rate per population in Tokyo versus New York is large enough that it's unlikely any corrections to the basic data could negate it entirely. The nagging question is why the disparity exists and what it really tells us. McAfee leaps to the suggestion that there is "something fishy here," implying nefarious reasons for the disparity, but a serious analysis would require more and better data, and consideration within the wider context of drastically varying COVID-19 mortality rates across all major regions.